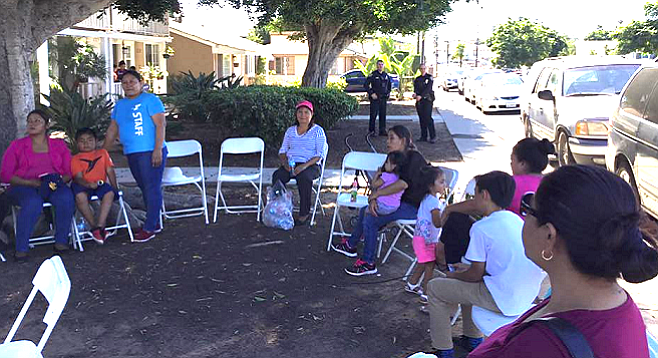 Tenants at a large Linda Vista apartment complex who last month threatened a rent strike are following through on their intentions. What that will eventually mean is still unclear. 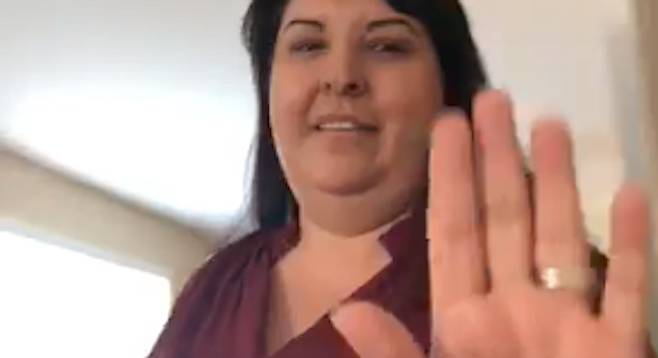 Management personnel briefly tried to stop the recording of proceedings inside the office.

The battle between tenants and ownership at the Village Apartments on Eastman Drive has been ongoing for over a year, with tenants’ concerns ranging from roach and rodent infestations, moldy units, and leaky roofs still allegedly unaddressed.

"We had already agreed that we would try to contact the owner if he was around the property," Bautista said. On Monday (October 23rd), they got their chance.

"After we marched, they got rid of the old manager and brought in a new one this Monday," he continued, explaining that higher-ups were expected to be on-site for training. "We started gathering in the parking lot outside the office. When there were about a dozen people there the owner showed up and went inside.

"When we tried to go in, we were locked out."

Such an occurrence is not uncommon, according to Bautista — several times in recent weeks tenants have tried to contact the rental office during business hours and found the doors locked with staff inside. This time, as the crowd outside grew and evolved into a parking-lot sit-in, police were summoned.

"When the police came they told us we were within our rights to protest; they didn't give us a hard time," Bautista continued. "They went inside, talked to the management group that had called them, and worked something out to where an officer agreed to walk people in and out one at a time. I was allowed to go in with one of the tenants as a translator.

"The owner stayed in the back; he wouldn't come out. I kind of confronted him — I called out the fact that these lease addendums haven't been signed, the terms aren't being met. ‘What's the deal, are you going to kick people out? Are you going to give them new terms?’”

Tenants United has been pushing for a form of rent control that would, among other things, cap rent increases at 2 percent annually for existing tenants. Earlier in the month, management responded with a letter denying the request while highlighting a number of property improvements that have taken place since a new owner, ETC Village LLC, purchased the property in 2016. While no sale price was reported at transfer, the 162 units spanning 14 parcels are security for a $23,900,000 trust deed — the total property tax assessment is based on a value of less than $2.5 million, suggesting the sale was likely not an arm’s-length transaction but rather a transfer between two affiliated companies.

Bautista, meanwhile, says tenants are left wondering what to expect.

"They took [the offered rent], but then they sent out invoices for the outstanding amounts," he says of those tenants who elected to continue paying under the terms of their now-expired leases. "[Ownership] told us before that he'd come back with a better offer, but he hasn't done that. We've essentially been left hanging for a month and a half. We want to know what's going on."

While the property-management company has continued asserting its right to collect the new, higher rents tenants were notified to begin paying, they haven't begun the eviction process over unpaid rents, a move Bautista says denies unhappy tenants their day in California's tenant-friendly court system.

As for what's next?

"We might end up in [the property owner's] neighborhood, letting his neighbors know they're living next to a slumlord."

I'm surprised. The cops were called and didn't put muscle on the crowd? Yes, those folks were within their rights, but that doesn't mean the SDPD would respect that. They could have declared it an unlawful assembly and then arrested the ringleaders for conspiracy. When Goldy was city attorney, they might well have done just that.

If ours is a "tenant-friendly court system," I'd hate to see one you'd actually consider hostile to tenants.

A hostile court system would sentence a tenant to thirty days in the electric chair.

Being able to stay for a good six months without paying isn't "friendly" enough to you??? I'd like to see a system that's friendly to working, productive citizens instead of freeloaders.