The suspension bridges, the houses by Gill, Requa, and William Templeton Johnson 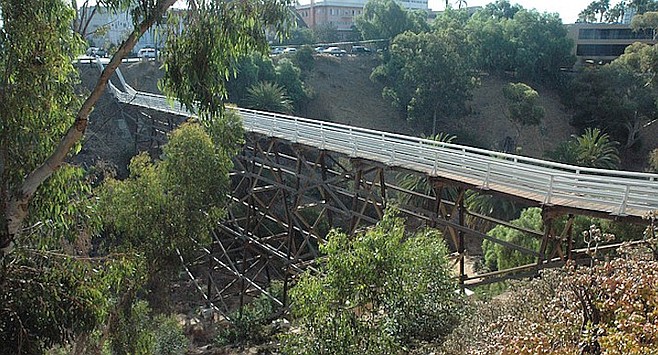 To the north above downtown and east above the airport rises Bankers Hill. Literally “uptown,” Bankers Hill is characterized by historic homes and modern development. Landscaping and non-native plants are found in the canyons that prevent grid-style roads from connecting to the other side. The best way to see this part of San Diego is by walking. 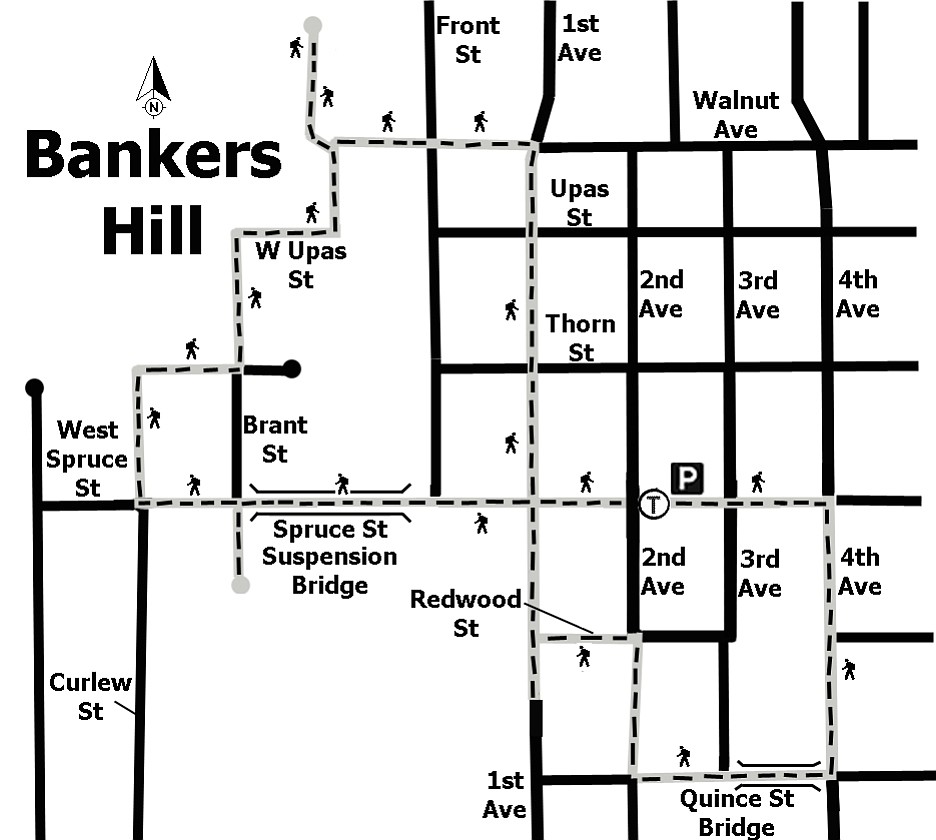 Look for street parking near First and Spruce. 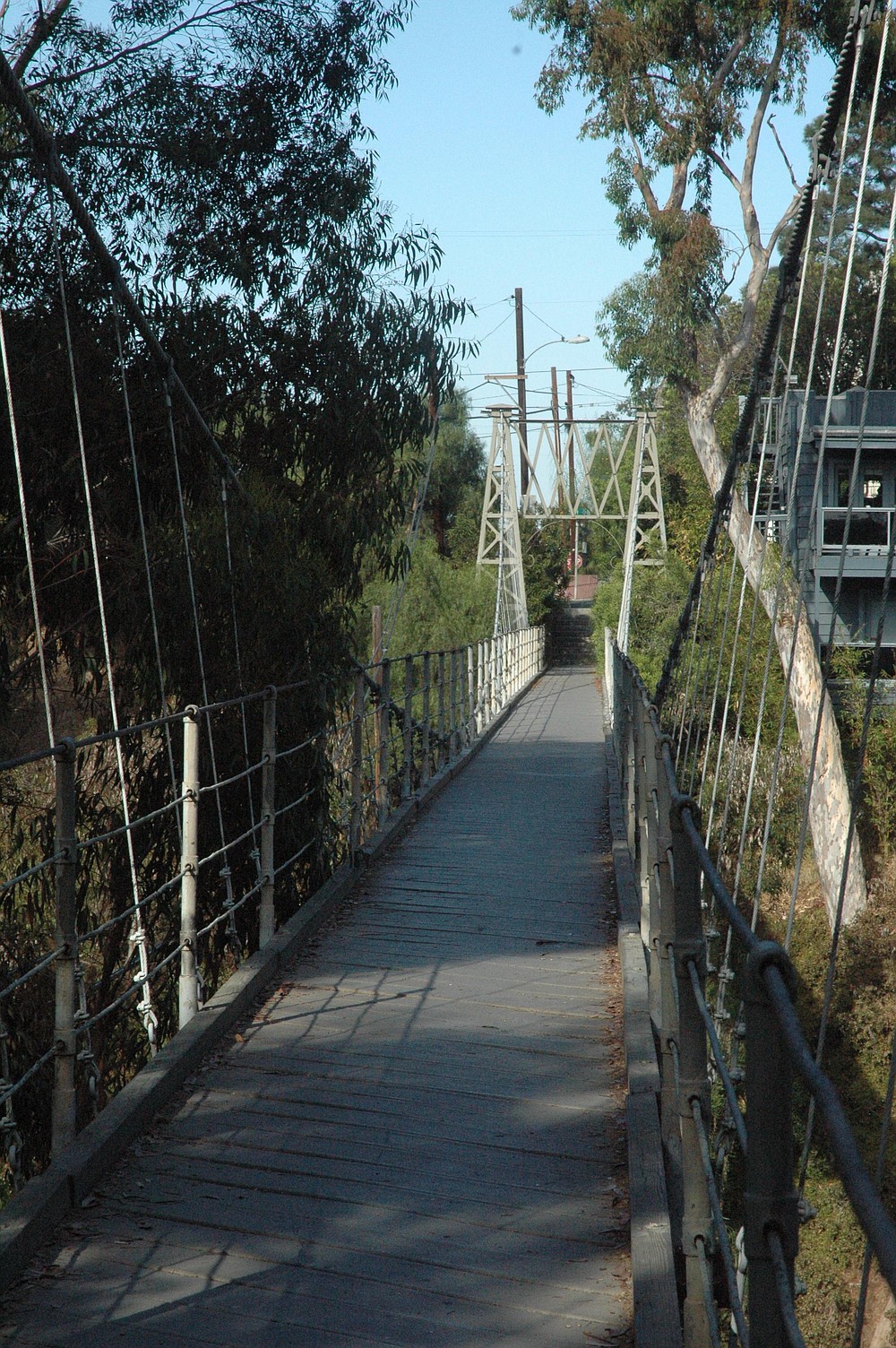 Spruce Street bridge — from the same era as the “modern” Requa homes.

Turn right on Fourth Avenue, along where the cable-car tracks would have been over 100 years ago, and start walking south toward downtown. The sidewalk ends at Redwood Street, so cross to the other side of the street, returning to the west side of Fourth Avenue at the Quince Street footbridge to cross Maple Canyon.

This historic wood-plank bridge, constructed in 1905, was built to provide access to the Fourth Avenue streetcar route. From the spectacular vantage point of the bridge, you can look down at the non-native palm, pepper, and eucalyptus trees that characterize the canyon. Native plants like lemonade berry (Rhus integrifolia) can also be seen from the bridge. The gleaming blue on the horizon at the mouth of Maple Canyon is San Diego Bay. The prominent eucalyptus trees that line the canyon pose a threat. On March 20, 2011, the wind caused a tree to fall and partially destroy the handrails and damage the bridge near Fourth Avenue. The repaired bridge characterizes contemporary Bankers Hill. Here, historical structures have been rebuilt and repaired while new development has also flourished nearby. As you cross the bridge, you can see the trail leading down to Maple Canyon.

Quince Street continues on the other side of the pedestrian bridge. Continue walking west to Second Avenue, then go north a block. Along this route you will pass new houses as well as classic revival-style homes. At 136 Redwood Avenue is one of the earliest buildings, which was a partnership between renowned architects William Hebbard and Irving Gill. On the corner of Redwood Street and Second Avenue, the 1898 Ernest W. White residence has one of San Diego’s largest camphor trees. Turn left at the camphor tree and head west along Redwood Street to First Avenue.

Redwood Street ends near the Self-Realization Fellowship, situated on Arroyo Canyon’s edge. In 1908, Irving Gill designed this building for the Bishop’s Day School. In a caption to a photo in his 1916 essay written for The Craftsman, he wrote: “Honesty, frankness, and dignified simplicity mark this house designed to rest upon the crest of a canyon: Seen from the bottom of the slope, this section of the Bishop’s School, designed by Mr. Gill, rises like a natural monument of stone.”

From the gateway of the Self-Realization Fellowship, head north along the canyon edge, first along First Avenue, then left, heading west along Spruce Street. Turn left on Front Street and walk around the cul-de-sac before crossing the historic suspension bridge. The edge of the canyon is obscured by eucalyptus. However, down the cul-de-sac you will find the Charles A. Martin House (3147 Front Street), designed by Richard Requa in 1912.

Return and cross the suspension bridge designed by San Diego mayor Edwin Capps. The bridge is from the same era as the “modern” Requa homes. This 1912 bridge crosses Arroyo Canyon, which is filled with eucalyptus, mixed palm species, and assorted non-native species. A palo verde (Parkinsonia sp.) provides shade and a laurel sumac (Malosma laurina) greets you as you reach the stairs on the other side.

Follow the canyon edge again to the south, turning left down Brant Street to loop another cul-de-sac that contains the Charles W. Fox/William Sterling Hebbard House (3100 Brant St.). In 1908, Hebbard’s partnership with Gill had ended, but the architecture retains inspiration from Gill’s philosophy of simplicity.

Looping back to Spruce Street, head just a little farther west to pass the Low residence designed by William Templeton Johnson in 1927. The Spanish-revival house faces Spruce Street. Johnson also designed the San Diego Natural History Museum building in Balboa Park in 1932. Take a moment to reflect on the design of the homes near the corner of Spruce Street and Curlew Street before turning right to go north on Curlew Street, which is also said to include more of the work of Hebbard.

Continuing north on Curlew St., begin to round the corner, turning right on Thorn Street to find a historic 1927 Palladian-style mansion. A plaque out front reminds you that back in 1897 “nothing happened.”

Now the walk returns to the start by looping around the top of Arroyo Canyon. Continue east on Thorn Street, then go left to walk north again on Brant Street, then left again to go east on Upas to Albatross. On Albatross Street, take a right to another cul-de-sac. Look at multiple historic homes designed by Irving Gill dating 1912–1913 that are built on the side of the canyon. The San Diego Historical Resources Board has designated Lee House #2 and #4, as well as Katherine Teats House #2 and #3 as historical landmarks.

Detour one more time by going west on Walnut Avenue to see a Queen Anne Victorian that dates to 1892. It was originally built at the corner of Fourth and Walnut avenues but was moved to its current location in 1911.

Head east on Walnut toward Balboa Park and continue until you reach First Avenue, walking as close to the edge of Arroyo Canyon as the modern road will allow you to. Imagine how long it would take to walk around the canyon without the suspension bridge. Turn left once more and walk east to 3162 Second Avenue to see the Hortense Coulter House, created by Carlton Monroe Winslow in 1915. Did you notice this National Register of Historic Places site when you started here?

Difficulty: Easy, with less than 50 feet elevation change. There are stairs at the bridges. No facilities. Many of the historic and modern buildings on this walk are private residences and businesses.