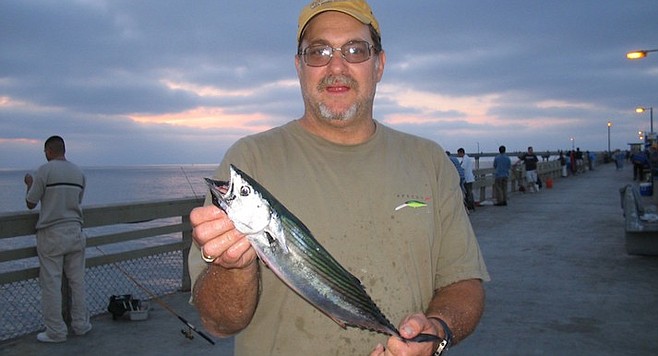 Saltwater: The bluefin tuna bite off San Clemente Island has slowed a bit through the week, and though a few have been caught pretty close to home by ½ day boats and private boaters off the 9 Mile Bank, the overall number caught was one-fourth that of the week previous. While the yellowfin tuna numbers remained steady, yellowtail, skipjack tuna and bonito numbers went up dramatically as the week progressed. The pattern so far this autumn is akin to last year’s numbers, as the excellent pelagic fishing continues for a fourth season in a row. If the trend continues, we can expect to see good surface action offshore until Christmas decorations replace paper turkeys in the window, and maybe beyond.

Legal-sized spiny lobsters are coming up at a decent clip, with about 2 out of 5 raised making the grade and an average of 2.5 keepers per hoop-netter, per evening. Kayakers and private boaters are doing about the same as the open-party lobster trips, given experience and location. That some of the better spots are in high-traffic boating areas, such as the rocks along the bay channels in 10 to 20 feet of water, safety is an issue — especially for kayakers and divers seeking the tasty crustaceans. As the lobsters come out at night you need a lighted craft and reflective dive-markers (whether entering from shore or boat). Hoop-netting from shore won’t get many, if any, results, as you need to raise the net quickly straight up to keep the lobsters from escaping.

The open party trips are a good way to learn how to hoop-net, though the piers in the bays and those extending offshore from the beaches can be great platforms, especially for those who don’t dive, kayak, are prone or are to sea-sickness. Ocean Beach Pier, as it is between the south Mission Bay jetty and Sunset Cliff reefs, and Shelter Island Pier along the riprap rocks are two of my old favorite hoop-netting haunts. The bonito biting in good numbers bodes well, as they make bait for lobster. They may have poor eyesight, but California spiny lobsters have acute senses of smell, touch and taste and will scent and feel their way quickly toward any fresh morsel of oily fish, such as tuna and especially mackerel and bonito.

Oct 13 – The Mission Belle called in from their ¾ day run with limits of 85 yellowtail and 34 bluefin tuna for the 17 anglers aboard.

Oct 12 – 10 hoop-netters aboard the Jig Strike lobster trip kept 6 red rock crab along with 24 spiny lobster out of 73 raised during their evening ½ day run. The Liberty returned to the dock from their ¾ day run and reported a mixed-bag for the 14 anglers aboard, with 13 dorado, 9 yellowtail, 14 bonito, 28 skipjack tuna and limits of 70 yellowfin tuna.

Oct 10 – Given plenty of elbow room, 7 anglers aboard the Dolphin ½ day trip caught 22 yellowtail, 35 bonito and 1 halibut. The Pacific Queen returned to the dock from their 1.5 day run with limits of 26 dorado and 65 yellowfin tuna for the 13 anglers aboard.

Oct 8 – The Eclipse called in with 2 yellowtail, 2 dorado and limits of 105 yellowfin tuna for the 21 anglers aboard their overnight trip.