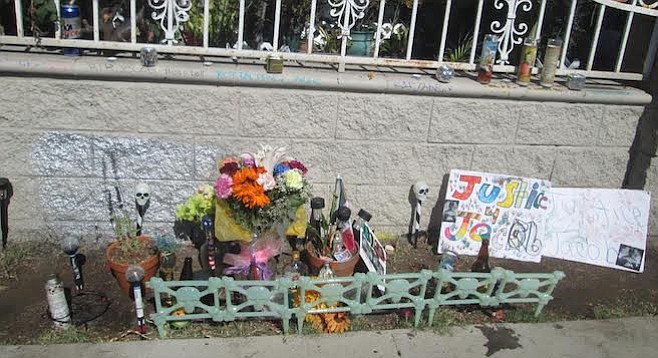 On Friday, October the 13th, around five in the evening, a group of about 30 protesters gathered in front of the National City Police Department headquarters on National City Boulevard holding banners and signs reading "Justice for Jacob" and asking passing cars to honk their support, many of whom did with enthusiasm, raising in return a loud response from the protesters. 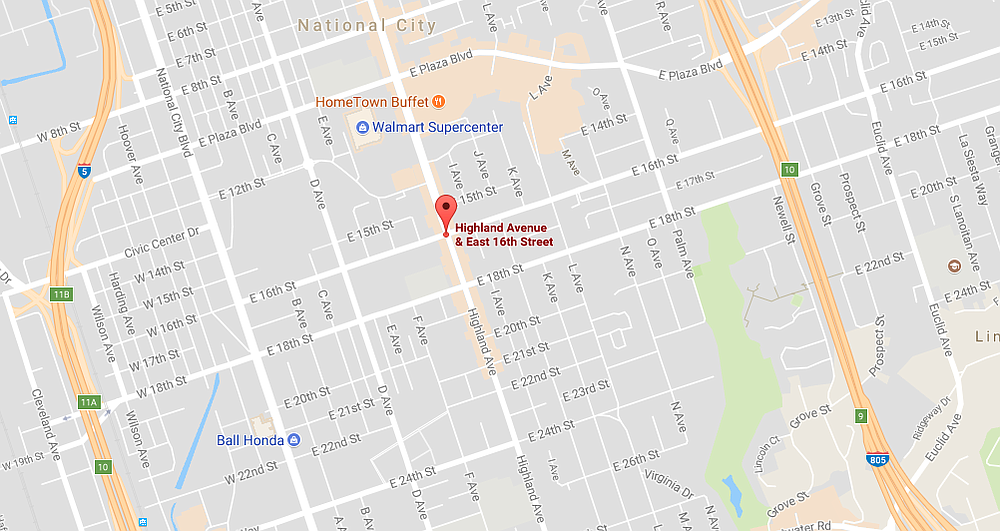 Police stopped trailing protesters after they headed east on 16th Street for a couple blocks.

According to some of the people at the protest, "Jacob,” identified in media accounts as Jacob Velasquez, was one of the victims in the highly publicized June 24th shooting that occurred on East Eighth Street in National City, ending with two wounded and two fatalities.

A young woman who identified herself as Cecelia and a former girlfriend of the deceased, said that the protest had to do with the National City police's handling of the homicide. "They know who did the killing but they haven't arrested him. They treat it like our family member is not important, like it's just a gang killing. They don't give the family any answers."

Though police arrested a suspect on the scene the day of the killing, he was released days later for lack of evidence. Police admitted they had a lot of evidence to sift through at the time.

The organizers of the protest, the mother and sister of Velasquez, wore T-shirts honoring Jacob, then led the group out onto National City Boulevard. They began to march south toward 16th, shortly afterward followed by three National City police vehicles with lights flashing, which caused the protesters at various points in the march to yell and gesture angrily at the authorities.

As the march went east on 16th, a few blocks later, the police broke off and drove away from the protesters, who continued onto Highland Avenue, turning left and marching toward the mall on Highland and Plaza Boulevard. After standing and protesting a while longer, the group broke up and left.

According to a police source, there had been two previous "Justice for Jacob" protests; however, this was the first time a march had been part of the protest. Both National City Boulevard and Highland Avenue are busy main streets, but despite what police said were dangerous traffic conditions for the marchers — some of whom were pushing strollers — cars slowed respectfully behind the small group and showed no signs of impatience despite long waits as the protesters walked down the street, stopping every so often to regroup or to urge drivers to honk in support of their cause.

When asked why the protesters felt otherwise, shoulders were shrugged and heads shaken, added to the response, "I don't know." One ended by saying, "Talk to them and if you find out why, you tell us."

Meanwhile, back at police headquarters on National City Boulevard, there had been a car accident in almost the exact location where the protest had taken place about an hour earlier. Onlookers gathered on the street edges and corners to gawk at the scene, and police circled their cars around the debris scattered from the collision.

The sun fell quietly away, evening traffic filled the streets, headlights staring bright into the pale evening in one direction, taillights streaming red in the encroaching darkness from the other direction.

Sometimes the police "know" who the perp is but they do not have enough evidence. The police present their case to the DA. While the police may arrest a person it is the DA decides whether to prosecute. If a person is arrested and the case presented to the DA and the DA declines to prosecute the suspect has to be released and the charges dropped.

That wasn't the case here. There are different versions of what happened, the official police version as presented in the subtitle and fourth graf of this story, which is discounted by the family. Then there's the police source story, and the family story.

The police sources version seems to be that the day this happened, police showed up at a shooting with dead and wounded in the street and dead and wounded in a house, so obviously there's a chaotic scene with multiple victims and at the end of it, they took the one who had been found with a body inside the house into custody. But after investigating, detectives found that "there were many shooters" and supposedly what happened was the person who shot Jacob was himself shot and killed. So Jacob's murderer was also murdered, according to this version. The family seems to think that the police let the killer go and aren't interested in pursuing it because the police think it's a gangland killing. You can kind of see why they believe that given what happened that day, and then the story changing so dramatically. Where the truth lies is anyone's guess.