"We're not being jerks and trying to force our message onto anyone." 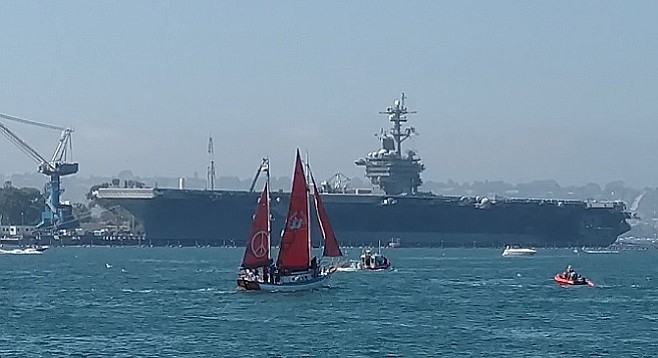 On Saturday (October 14), Fleet Week was in full swing at San Diego Bay. 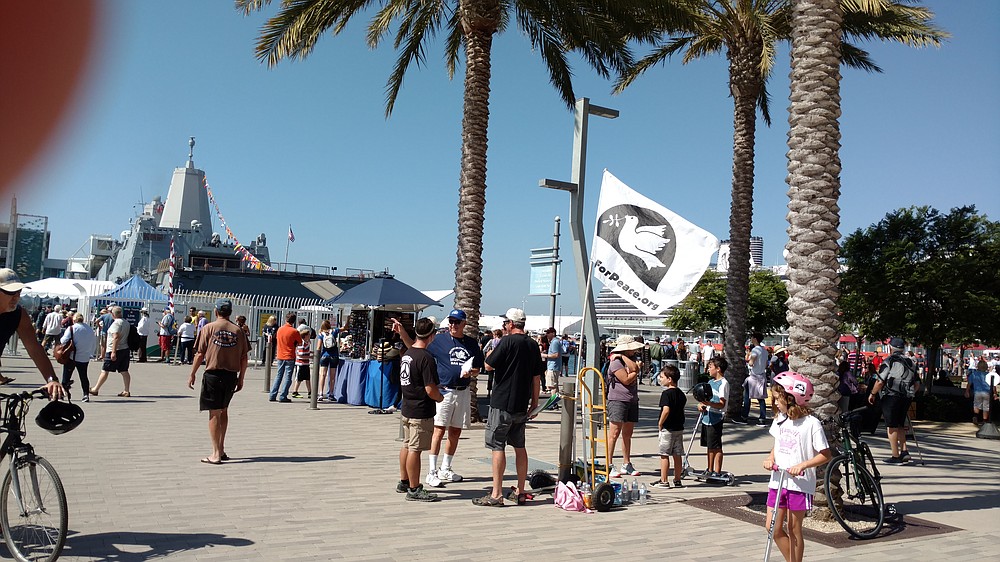 Crowds lined the waterfront from Tuna Harbor north along the Embarcadero to watch Navy and Coast Guard vessels and helicopters performing in and over the water. More waited in line to tour Broadway Pier, where sailors sporting sidearms and semiautomatic rifles guarded access to the amphibious transport ship USS Anchorage, troop transports, churro vendors, tanks, bubble tea stands, and pieces of heavy artillery on display.

Outside the pier entrance near the foot of Broadway, demonstrators with Veterans for Peace handed out flyers calling attention to the Golden Rule, a 34-foot sailboat serving as an unofficial entry in the ongoing parade of military might.

The boat, which was the flagship of a thwarted 1958 attempt to block nuclear weapons testing in the Marshall Islands, is on its second tour of San Diego, having previously visited for a 2015 peace conference.

"Obviously you've got a certain demographic who's coming out for an event like this," admitted Sean, one of the veteran activists handing out flyers calling for goals such as a peace treaty with North Korea, a diversion of tax dollars from military spending to more local concerns like homeless veterans subjected to the ongoing hepatitis A epidemic, and a cessation of showy events like Fleet Week that the group says misleadingly attract youth to volunteer for service.

"Still, we're not being jerks and trying to force our message onto anyone," Sean continues. "I'd say the response has been a mix between interest and neutrality, nothing really negative."

Helen Jaccard is the Golden Rule’s project manager and was part of the two-boat demonstration on the bay Saturday.

"We're responding to the desensitization that's going on that makes it seem like war machines on our streets and in our waterways is just a normal thing," Jaccard said.

"The people that seem to be most receptive to our message are the servicemembers on shore mingling with the rest of the population. Veterans for Peace is military veterans interacting with active duty military, and they listen," she continued, adding that most of the feedback the group has received at a total of five Fleet Week celebrations (including past stops in Portland, Seattle, San Francisco, and Los Angeles) has been positive.

The Golden Rule will remain docked in San Diego throughout the winter, with various other outreach projects planned for the coming months.

It's a sure bet some of those sailors were holding fully automatic rifles. Educate yourself and save the "semi" for anti gun panic stories.

Actually, the AR15 came before the M16. The AR15 came from the Armalite Division of the Fairchild Aircraft Corporation. The M16 entered U.S. military service. Both weapons are a scaled-down redesign of another Armalite rifle, the AR-10, designed during the mid-1950s to fire the full-power 7.62 NATO cartridge.

The M16 entered U.S. military service in 1964 and was first deployed in Vietnam the next year.

The M-16 replaced the M-14. The M-16 would not have a woodstock or bayonet. The M-16 was designed for jungle warfare. It was mostly resin components/plastic and was very easy to disassemble and assemble, to get the mud and bamboo out. There were competitions at one time (back in the 1980’s) of how fast one could dissemble and reassemble an M-16. It was an interchangeability weapon; you could make a good one out of two bad ones. They were lightweight without the wood, the aluminum also lightened the weight. So guess what, the magazines could be much bigger. New technology created a way an M-16 could automatically fire hundreds of rounds per minute with only a small modification to the M-16 barrel and flash-suppressor.

Ah, yes, the M-16. I managed somehow to my surprise to qualify Expert with it in 1969, so I do know a little bit about it. While "over there" I learned more that wasn't so flattering, such as its penchant to jam. There have been many articles and even entire books written about the development of the weapon, and some strange decisions made. Colt was busy selling it to the Army, but when they finally got a final design, could not ramp up production to meet the commitments they made, and farmed out some of them to other manufacturers. Quality control suffered. The true hard core infantry types still would prefer a larger caliber rifle, and think the AK-47 is a better rival. A tangled story and not a pretty picture at all.

Stop! Fuggedabout cavilling over the weapons of war. Let's hear it for the estimable Veterans for Peace who are untiring in their positive efforts to educate us about the expensive folly that is national "defense." And let's also praise The Golden Rule, a beautiful sailboat, that joined other military vessels in the harbor for Fleet Week. We can think about doing unto others as we wish they would do unto us and support peaceful resistance to the Orange One who heedlessly imperils the world with his braggadocio, blundering bluster and bullshit.