Green Acre’s director of food and beverage Chris Simmons serves his Mexican Mule the same way as the Moscow Mule — in copper cups. While his variation on the vodka-cum-ginger-cum-lime original is served as cold as a Russian winter, Simmons finds the heat for his concoction a bit further south.

More than white liquor-swap (tequila for vodka), Simmons says, the Mexican Mule gets its legs from the infusion he developed. While the infusion process might take longer than muddling, he says the results are worth the wait. 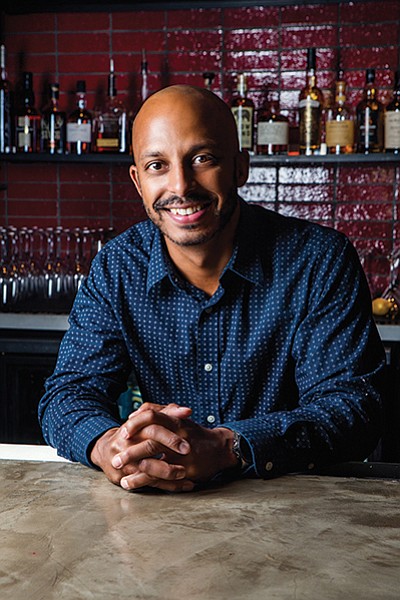 “The difference between infusing and muddling is a deeper, richer flavor in the cocktail,” Simmons says. “You can get a similar effect if you were muddling the pineapple, but it’s not quite the same. With infusion, the liquor takes on a different viscosity and a slightly different mouth-feel to it; so it’s a richer, deeper experience once it’s in the cocktail.”

Speaking as a certified catador — the distilled-agave world’s equivalent of a sommelier — Simmons notes that Arette’s offers a “multidimensional” quality to the Mexican Mule.

“There are two growing regions for agave in Mexico, the valley and the highlands,” he says. “The valley tends to produce a tequila a little bigger in flavor and with a little more minerality. The Arette is especially good at allowing that flavor to come through in the cocktail.”

But the flavor’s bigness doesn’t lame the mule, Simmons adds.

“We get that mineral-driven tequila first,” he says, “and then the fruit component from the pineapple, and the sweetness of the vanilla is there at the entry. Then it finishes with the spiciness of the ginger beer. The quality of the ginger beer we use is important — I like one that has a good amount of ginger bite to it.”

Add tequila, sliced pineapple, and vanilla (sliced lengthwise and scraped) with scrapings to glass jar, and refrigerate for a week.