Panhandlers pushed back in El Cajon

"I've been lucky here. I don't talk to cops that much." 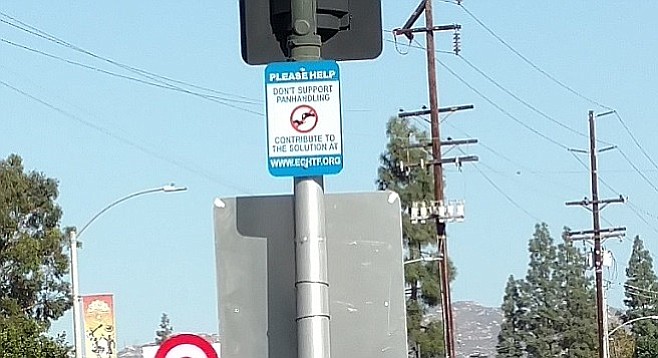 Announced Monday (October 9), the "Real change, not spare change" campaign "encourages the public to contribute in meaningful ways to help homeless individuals rather than contributing to panhandling."

"Panhandling has a very real impact on El Cajon. It hurts local businesses and jeopardizes the safety of well-intentioned donors," reads a release from the city. "Experts have stated that providing spare change to panhandlers does not help those in need. In fact, in many cases, contributing to panhandlers only fuels their addiction or impedes them from seeking help."

The city also highlights its contributions to what it says are more effective ways of combating homelessness. First, El Cajon "provides nearly $225,000 to transitional living centers and a local shelter each year." This year, an additional $168,500 is being directed toward homeless or homeless-related incentives, including $70,000 to pay the salary of a city "housing navigator" to "help homeless individuals find housing," $80,000 in rental assistance vouchers, and $3500 to develop "an easy to use phone app that connects homeless individuals with services." Another $10,000 is going toward a Salvation Army program that locates family members of the homeless elsewhere in the country willing to take them in and pays for their transit.

The signs themselves are small, measuring perhaps 12 to 14 inches in height. They feature a picture of two hands reaching out to meet covered by the international prohibition sign (a red circle with a slash through the center), with the East County Homeless Task Force website address at the bottom.

A drive traversing most of El Cajon's downtown and major intersections Monday afternoon turned up only two examples of the signs, on Broadway headed east in the left-turn lane heading onto Graves Avenue, and a block west on Fletcher Parkway (the same street as Broadway, which changes names crossing under Interstate 8) at the westbound entrance to Interstate 8.

"Dave," who only identified himself after asking a second time for the author's name, was soliciting donations of food and/or cash outside the Del Taco restaurant at the southwest corner of Broadway and Graves. Sporting shaggy blonde hair, T-shirt, and cargo pants, the 20something says he's been homeless in the East County area for a couple years, "passing through" El Cajon for a while every few months.

"Did it stop me from [expletive] talking to you?" Dave responded to a question about his thoughts on the signage. He said more than the signs, he's worried that an anti-panhandling initiative will result in more negative encounters with police.

"I've been lucky here,” he said, “I don't talk to cops that much. Go into La Mesa. Those boys are for real. I don't even like getting off the trolley."

In the coming weeks, El Cajon plans to expand the campaign, with more sign placements and a poster version that will be distributed to businesses to display in store windows.

The tweakerette roadshow is on, on Balboa and Clairemont drives in Kearney Messa. You would think the City would want to avoid the liability of allowing people to spend the day on the center divider, but San Diego has plenty of money for settlements, right?

Caresse Vera - you're right, the $70,000 is the position budget, which likely includes employer benefit and Social Security contributions in addition to actual salary, which in turn would be lower.