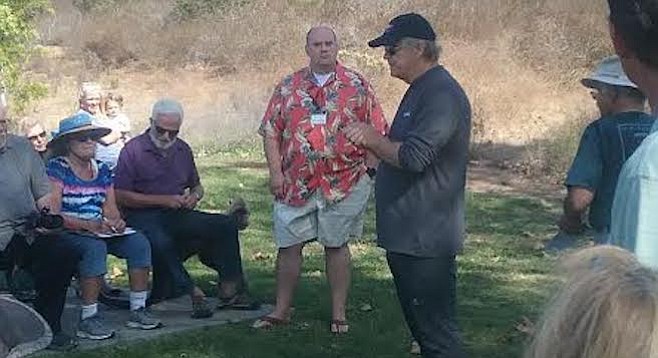 On August 22, the Vista City Council approved a one-year experiment to allow unleashed dogs at the “Trails” area of Buena Vista Park in Vista’s Shadowridge area. Its passage allowed dogs to legally run free in the park off Melrose Avenue from 7 to 10 a.m. and then again from 3 p.m. till dusk. Vista city staff recommended the policy. The city’s Parks and Recreation commission approved it unanimously. The council approved it 4-1. 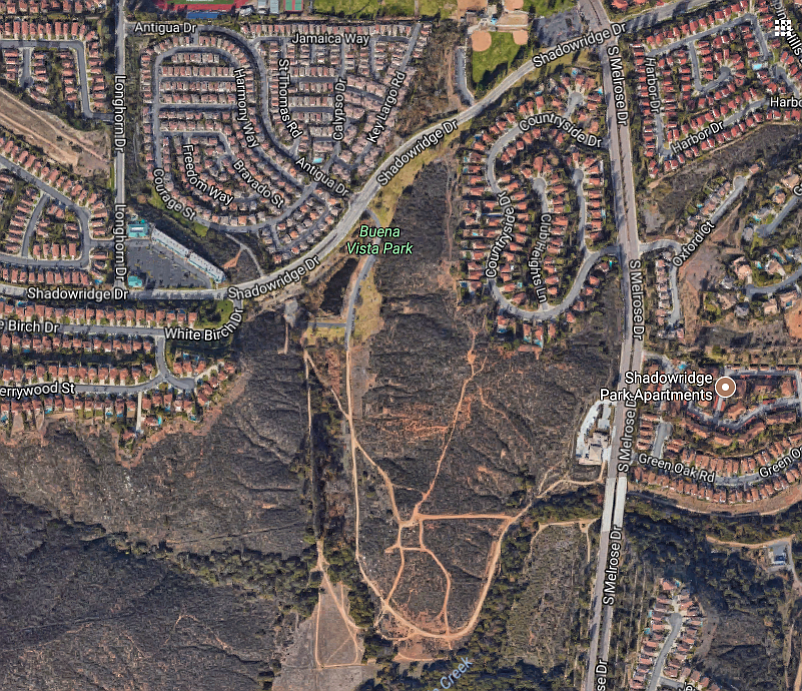 Sunday afternoon (October 8), one of the councilmen who voted for the ordinance held an “I-made-a-mistake” meeting at the park, telling 20-plus locals that he was going to move to have the new ordinance rescinded during the regular city-council meeting on Tuesday, October 10, six weeks after he voted yes.

“I don’t have a dog in this fight,” punned councilman John Franklin at the hillside get-together. He said he and his wife, who live nearby, don’t have a dog. “But I want to do the best thing for the most number of people.” He said an original signed petition presented to the council indicated 77 people who wanted their unleashed dogs to legally frolic did not have addresses.

“It is doubtful that all of the petitioners are residents of Vista,” said Franklin about the original petition. He said the park is regionally popular and attracts regulars from nearby Carlsbad. “I want to make sure our input comes from people who live in the City of Vista.” He said city staff “let us down by not gathering more community input before presenting this as a slam-dunk.

“We made a mistake as a council,” Franklin said. “I’m leery of anyone who says they get it right 100 percent of the time.”

Franklin proposes nixing the ordinance because of a new poll he initiated on the Nextdoor website. He said 59 percent of 313 Vista respondents did not want unleashed dogs at Buena Vista Park.

“There was a strong emotional response,” said Franklin.

Most of those who attended the Sunday-afternoon meeting in the park seemed to be in agreement with Franklin that all visiting dogs on the trails should be leashed. They included one lady who claimed to have picked up 12 bags of poop, another who said children “get knocked over by dogs,” and another who said that her leashed dogs are afraid of other aggressive unleashed dogs. Still another lady said that a bunch of fur she found on the trails was a result of coyotes who attacked small dogs.

“I was floored by all the response I have received,” Franklin explained. “[The city council] has been voting on whether we should have stores selling marijuana next to houses and this is the issue people are getting apoplectic over.”

Franklin has worked for Vista congressman Darrell Issa for 14 years, first as a staffer and then as a consultant. His Vista-based Pacific Political, Inc. continues to give political advice to Issa. “I also help mayors, assemblymen, other congressmen, state senators…. But I guarantee Congressman Issa has no interest in off-leash dogs in this park.”

Vista will turn to district elections for the first time next year. Franklin’s Shadowridge district includes Buena Vista Park. He said he will be running for that newly created district seat. “This is the first time I have announced this.”

Tuesday night’s Vista City Council meeting could get interesting. Franklin explained that because of parliamentary rules, councilwoman Amanda Rigby (who was the only person to vote no on the ordinance at the August 22 meeting) cannot vote on the motion to reconsider. Because councilman John Aguilera will be out of town, Franklin says he must convince both remaining councilmembers — mayor Judy Ritter and councilman Joe Green — to switch their votes and vote with him to keep dogs on leashes at the park.

At the August meeting, the City of Vista’s animal-control contractor, the San Diego Humane Society, said that it received five complaints of unleashed dogs at Vista parks in all of 2016.

At the Sunday meeting, Franklin admitted that it is not likely a law-enforcement official would enforce on-leash laws. I noted to Franklin that it seems odd that such a strident Republican like himself would vote for an ordinance that he admits would likely not be enforced and would mean more government intervention in his city of 101,000-plus.

Councilman Franklin told me of the one person he discovered who got a citation for having an unleashed dog at the park. Her name is Alison Irwin. She says it did happened seven years ago when a maintenance worker called code enforcement who waited for her after a hike to ticket her. She says there used to be "cops on bikes" in the park but that there is not a lot of enforcement at this time. She says she hikes every morning, and that there is simply not an issue with unleashed dogs. She laughed when I told her about the lady who claimed that doggie fur on the trail came from coyotes attacking small dogs. "That is from this same lady who always grooms her dogs and doesn't clean up after herself."

Not to quibble unduly, but the name of the park doesn't include the word "Rancho." It's just Buena Vista Park. I walk there at least once a week, and have been doing so for about twenty years. In the farther reaches of the park, especially east of Melrose Drive, at least half of the dogs I encounter are off leash. Most of the time they are no problem, and are under control of their humans. But when two unleashed dogs meet in there, it can get wild, and I've witnessed some tense confrontations. Saying that "there is simply not an issue with unleashed dogs" is Ms. Irwin's opinion. In all the time I've used that park I've never seen any presence of law enforcement, except for one occasion near the pond, and it had nothing to do with dog leash enforcement. At one time the city supposedly had some park rangers, but they are invisible; they come out at night to lock gates and then open them again in the morning. Bottom line: no enforcement.

A nastier issue is all the dog poop that ends up on the trails. Yes, bags are provided at entrances and trail heads, and many people use them. But too many of those who bag the stuff also just drop the bags along the trail. Do they think there's a Paw, er Poop, Patrol that cruises around in there picking up the bags of nastiness?

I admire Franklin for his willingness to listen and reconsider. The mayor and Councilman Aguilera, both good people, have gone tone deaf on many issues recently. Good luck to Franklin getting Judy Ritter and Green to change their votes.

Correct. Rancho Buena Vista High School is nearby, There is no Rancho in the park.

Just another example of how government lacks common sense. Except in a confined area all dogs should be on a leash. While MY dog may follow my commands does not mean that YOUR dog will.

When are we going to enforce the no pets in grocery stores laws? I as in Sprouts yesterday and two people, both men, had their little scruffy mutts with them. One sitting (his bare but where I usually place my groceries) in his cart, the other guy just letting his dog wander with him unleashed. It’s really annoying and I guess the “management” of these establishments has no spine to confront and enforce state law and their own rules. I am sick and disgusted of seeing dogs in grocery stores.

Maybe a complaint to the Health Department, which I suppose is charged with enforcing such regulations, would get results. You would have to provide the precise time and day, and a detailed description of the person and the dog. There are times when the actual managers of such establishments are in the back, doing their paperwork or ordering, and just don't see violations. I doubt that anyone really thinks that taking a dog into any store is OK. But if they get away with it, they'll do it.

I did complain to a local Albertson’s manager. But he told me that they had to be careful because of disclosure rules. This is the same store that I complained about long lines and their unfulfilled “3’s a Crowd” promise to open more check-lanes when the longs grew long. The Vons and Albertson’s merger has created a mess, the union employees are killing the customer service. There is none yet you pay premium prices. And I noticed the banners that used to hang above the check-stands that declared “3’s A Crowd” are gone now. So it’s now F you, we will only open 2 cashiers and let you, the overpaying customer eat cake.

These jerks at union controlled grocers need to learn they are becoming obsolete. I only go there when I absolutely can’t find something somewhere else. And that is becoming less and less of a problem with Amazon Now. They need to take a lesson from Trader Joe’s where checkout is a priority, not a menace.

The managers do not want to confront the people that bring dogs in. There are stores that post signs that state that the dog must have inoculation papers and other documents to prove out they are indeed a “service dog” not your average mutt. Service dogs cost thousands of dollars to train and deploy. These idiot, self-entitled (and usually millennial age group) folks that can’t leave Fido at home are a menace to society.

The ADA does not allow anyone, even law enforcement, to ask about a persons' disability. Also, it is all about money. The store wants the business and does not want to lose the customer to another store.

At the meeting tonight....as councilman Franklin previously said, John Aguilera was in fact out of town and did miss the meeting. But he was wrong about Amanda Rigby not being able to vote. She WAS allowed to vote. And so, along with Mayor Ritter and Mr. Franklin, the vote to rescind the original ordinance was approved three to one. Mr. Franklin writes: "the necessity of a new ordinance however requires it to come back before the council in full complete form to be finally passed." He says about twenty people spoke tonight. Of them, he says that only two or three favored off leash. The rest, he says, agreed with him and wanted Vista to make it against the law to take a leash off your dog in Buena Vista Park. This, while he admitted at his Sunday meeting in the park that its a law that probably wont be enforced. One social media gadfly said that an unenforceable law is often called a bad law and that Mr. Franklin who regularly flaunts his GOP DNA is a fraud for enacting a law that gives $100 tickets to people who let their dogs run free in a park. All I know for sure is Mr. Franklin was open and accessible for discussion on this. He exposed himself to ridicule and stepped up to the plate as the guy who stood for something that was potentially unpopular. When all is said and done, maybe there are some issues like potholes that aren't Democrat or Republican. And maybe dogs in parks is one of them. Maybe dogs in a public park are the menace that Ritter/Franklin/Rigby claim that needs legislation to eradicate.

I did see a Deputy Sheriff make the rounds in the parking lot last night around 6. My concern is that people, kids, and/or 'friendly' dogs could be attacked by unleashed pit bulls and other aggressives. If that happens, the City of Vista could be sued.