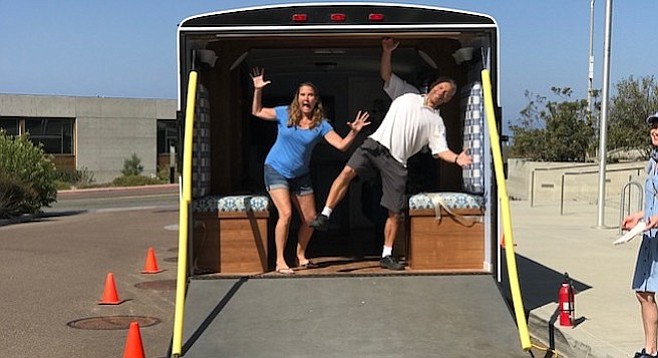 On September 27th, Marty Nelson, safety and environmental compliance officer at Southwest Fisheries in La Jolla, gathered his staff, along with faculty from adjacent Scripps Institution of Oceanography, to try out a magnitude 7.2 in the Big Shaker mobile earthquake simulator.

The inside is designed like a living room, with a big-screen television, shelves with loose items, and benches along the sides. The demonstration was planned before the recent earthquakes in Mexico City, but Big Shaker owner and operator Dean Reese said “people have a heightened awareness now.” 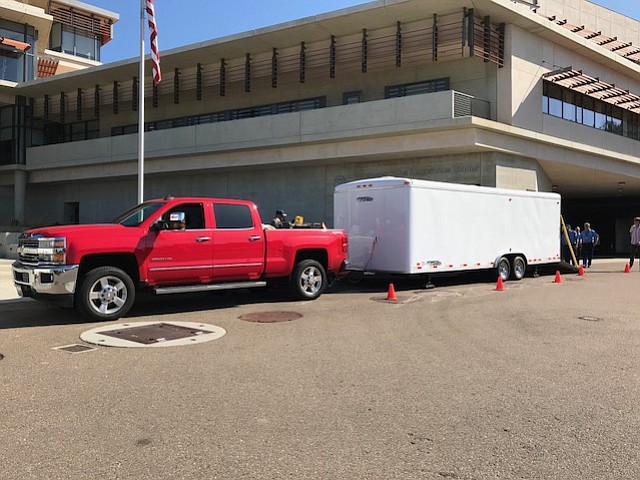 “The biggest earthquake we have seen in our models of the Rose Canyon fault is 7.0,” said Kim Olsen, a researcher from San Diego State who collaborates with Scripps to generate computer models of possible future earthquakes.

“We know there was a magnitude 6-something on the Rose Canyon fault in 1862, and a stronger one in 1800, maybe 6.5, though it’s not clear on which fault this occurred,” said Gabi Laske, who teaches an earthquake-hazards class at Scripps.

“A possible suspect is a fault offshore. If this is the case, we are looking at a local tsunami risk,” Laske added. “If we do have a tsunami, then low-lying areas are prone to flooding; e.g., La Jolla Shores, Mission Bay…”

“If we have a tsunami, I would definitely not want to be in the Center for Coastal Studies building by the pier — mind you, there are rooms below sea level!” 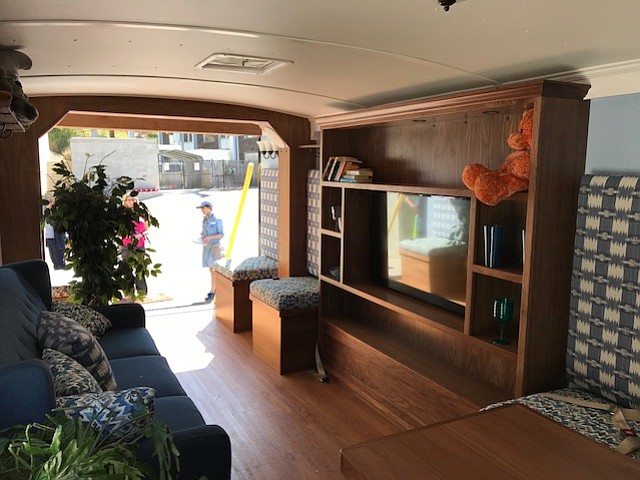 “Most of [Scripps Institute of Oceanography] itself may be high enough so tsunami may not be a great threat, but look at the cliffs and ask yourself what happens when you shake them. It probably doesn’t take much for some major landslides.”

“Even with smaller earthquakes on the Rose Canyon [fault], we will likely have liquefaction in La Jolla Shores. Liquefaction is a technical term and simply means that shaken ground [usually sediments] behaves like a liquid so that structures built on this ground lose their support. Other areas threatened by this are Lindbergh Field and Mission Bay.”

Laske and Olsen agree that the older wooden buildings on Scripps campus, like the old director’s house and the Institute for Geophysics and Planetary Physics, would probably weather the shaking — wood is somewhat flexible. The geophysics institute sits on four 80-foot stilts that are anchored to rock at the base of a cliff.

Though she made clear she is not a construction expert, Laske said Sverdrup Hall, in dire need of maintenance, and Hubbs Hall, with gaps in the walls already, would probably not fare so well. Roof tiles might shake off Ritter Hall.

“And, if you ask around, most of us do not have earthquake insurance, the argument being that deductibles are ridiculously high.”