"No friends, no music, no smoking — but you can have your dogs here." 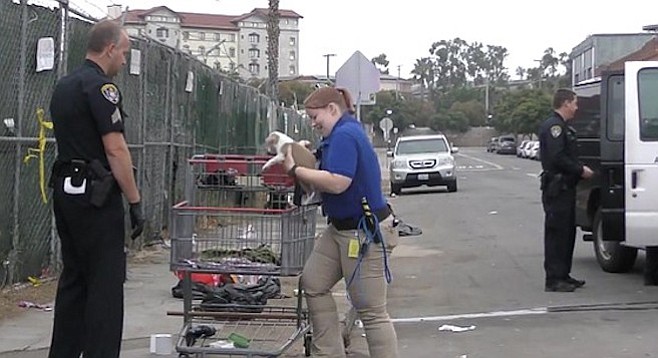 A pet-friendly bill hit the governor's desk on September 21. The bill (AB 1137) would mandate that new multi-family housing developments allow tenants to have pets if those developments receive financing through state programs. 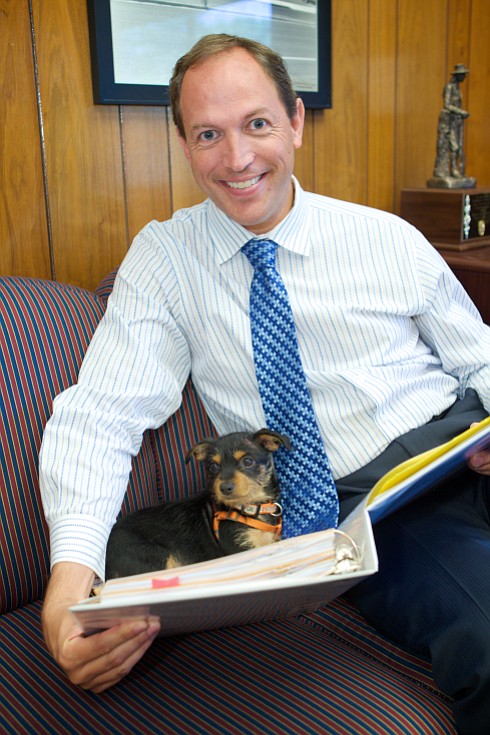 Maienschein with Chester, a dog up for adoption at an ASPCA event in August — Chester was adopted.

Former San Diego city councilmember Brian Maienschein, now a state Assembly member, introduced the bill in February. "Throughout my career, I have been passionate about animal welfare and the fight against animal cruelty."

He said the American Society for the Prevention of Cruelty to Animals informed him of the growing number of families who have faced the difficult decision of surrendering their pet to a shelter or keeping a roof over their heads. "I knew action had to be taken. Pet-friendly housing options will help families and animals alike."

It's hard to know where Jerry Brown will land on this one. In 2012, Brown proposed slashing the budget to get rid of shelter reimbursements that could have left strays and lost pets with fewer days before being euthanized. The backlash caused California lawmakers to reject the controversial budget cut. 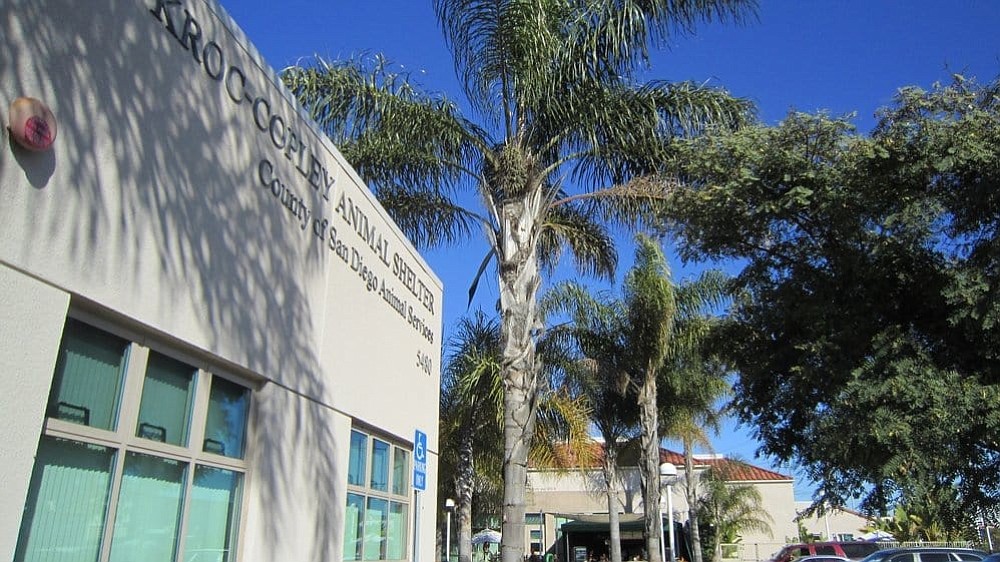 In the past three years, 377 animals were relinquished by an owner with the reason given as "landlord."

Bill Arns was ten when his family was given 30 days to get rid of their family dog, Bullet, due to a change of landlord. This was back in 1984 in National City, but Arns said it scarred him for life. "What was the worst part is I saw my dog being taken away by the dog catcher — heard him yelping.... And, insult to injury, [the landlord] evicted us anyways."

Arns said his family was on welfare at the time and their landlady drove a Mercedes. He said his mom assumed she was a snob. Arns never wanted to be under someone's thumb like that again, so he grew up and saved his money and bought two condos so he would never have to rent again.

Lenny has been hiding his two Dobermans, Reese and Wallace, in his non-pet-friendly Mission Beach apartment for six years. How has he kept them a secret for so long? Lenny said that management operates out of Oceanside so they're rarely onsite. "When they are, the dogs get snuck out and taken to the park or they get put in the bedroom." Lenny said he takes them to work so they aren't left alone when he's not there. He said his neighbors love the dogs, so complaints to management don't happen.

Lenny has tried to find a pet-friendly place to move to but it's been difficult. He said about a year ago after getting a rent-increase notice, and after searching Craigslist for weeks, he resorted to posting an ad stating his situation. He received only one response "from a militant-type landlord in Lakeside that didn't allow anything except dogs — no friends, no girls, no music, no smoking, no entry to property after 9:00 p.m. — but you can have your dogs here."

Lenny said if his landlord ever gives him an ultimatum, giving up his dogs isn't an option, even if it jeopardizes his living situation.

Demi Woodson, a mother of a child suffering from post-traumatic stress disorder, opted not to assert her rights to get a service or emotional support dog for her son while living in an extremely non-pet-friendly apartment in Clairemont. As a month-to-month tenant, it seemed too much of a gamble — she had concerns her rent might be raised out of retaliation. She decided to bide her time until she could find another place to move.

Demi has since bought a mobile home and moved into a pet-friendly park. She is currently waiting to find a program to help her afford a service dog. The cheapest thus far is $14,000. "[The cost is] one of the biggest reasons for the increase in emotional support animals that has left the system vulnerable to abuse."

Most of the former and current landlords I spoke with thought the bill was ridiculous and that there is no such thing as pet-owner rights, nor should there be.

"Seriously? There is a bill to do that? That's nuts," said Elizabeth Van Pelt. She used to rent out a home in Ramona. On advice from her property manager, she rented to a tenant with a small dog. After just two years, Van Pelt said the dog had damaged her home (carpet, padding, wood door gouged from scratching, screen shredded, fence boards chewed off in big chunks). "Sure, many pet owners will take better care, but there are careless pet owners out there — and they can cost a landlord serious money in repairs. If a landlord says no pets, you can bet they've seen first-hand what having a more lenient approach will cost them."

If you can afford $2500 or more in rent, you have the best shot at finding a pet friendly place.

Molly Kirkland from the San Diego County Apartment Association that represents landlord interests said some tenants abuse the laws that allow for accommodations for emotional support animals "to bypass the no pet policy" and avoid paying any related rents or deposits.

Kirkland said a landlord can ask for proof of need, but if they don't get it, her organization recommends making the accommodation anyway as it's not worth the fight. She pointed out that all other normal rules apply — the animal still can't be a nuisance. Though, she said that "rarely anyone is evicted for nuisance animals."

Christian Curry at the Tenants Legal Center said a pet-friendly landlord can go non-pet-friendly and give a month-to-month tenant 30 days notice to get rid of their pet.

Everyone I talked to had guesses as to how pet-friendly San Diego is, but no hard numbers. I checked out Apartments.com to see what they showed. The numbers fluctuate by the hour, but last week, out of 5526 listed rentals, 60 percent were dog-friendly and 63 percent were cat-friendly.

Out of 101 pet-friendly rentals available, 65 percent were available only if you could afford $2500 or more in rent. Approximately 25 percent charged no pet deposit or rent (the majority in affluent areas). Pet rent ranged from $20 to $100 per month and pet deposits ranged from $250 to $750 (pet pet). Generally, cats were less expensive on both counts. At least one-third had dog-breed restrictions. Renting a house was the most pet-friendly option, which often didn't ask for either pet rent or deposit.

How many animals end up in shelters because of non-pet-friendly landlords? Dan DeSousa from the county's Department of Animal Services said while they do track the reasons animals are surrendered by owners, it's hard to know if the reason given of "landlord" is because of a non-pet friendly landlord or a landlord that just got too many complaints about that particular animal. That being said, 377 animals were relinquished by an owner with the reason "landlord" over the past three years (July 1, 2014 to June 30, 2017). Of those, 264 were dogs and 107 were cats, with the remainder being other animals.

Is anyone homeless because of a non-pet friendly landlord? Kathryn Durant from the Regional Task Force on the Homeless said while they don't have that exact data, they do show 6 percent (357 people) that said their reason for not seeking shelter was because they had family, friends, or pets on the street. 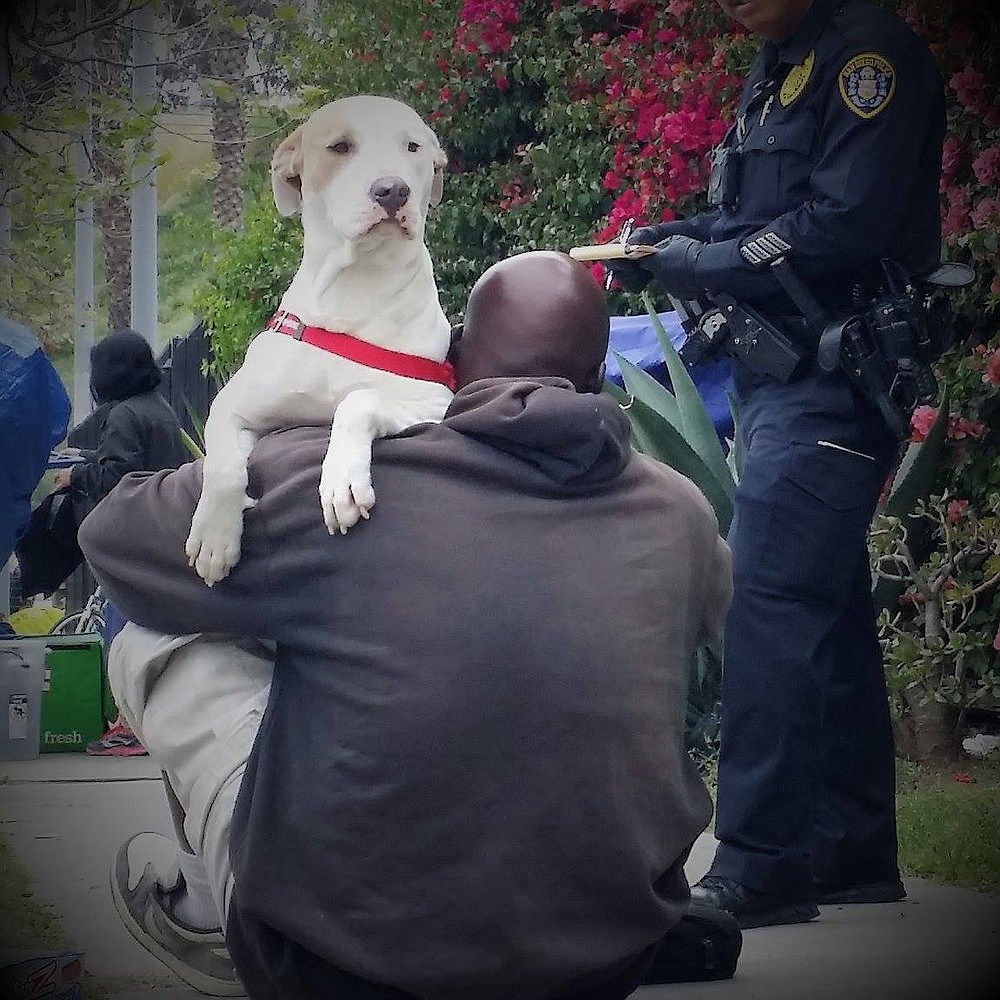 Richard had to give up his service dog to get into a shelter. He ended up getting kicked out of the shelter anyway.

I asked homeless advocate Michael McConnell if he knew how many local homeless shelters accepted people with pets. "I know one guy [Richard] who recently had to give up his dog to be in a shelter. He was just too big. He was even a service dog but the shelter couldn't accommodate such a large dog."

McConnell boarded the dog for a while until Richard adopted his dog out to some people he had met while on the street. McConnell said the sad end to this story is that Richard got kicked out of the shelter anyway.

Even if Richard had been able to hold on to his dog in the shelter system, McConnell said, he might have had as hard a time as anyone else finding permanent housing that would accept his dog.

With the city council's recent approval of measures to address the housing crisis, I asked the city if they would be open to considering a similar pet-friendly mandate locally — for example, any housing developments that take advantage of fast-tracking or other significant cost-saving measures offered by the city. The answer was a definitive "no," per city communications.

Governor Brown has until October 15 to sign or veto the bill. If he does neither, the bill will automatically become law. If vetoed, the legislature can override that veto by a two-thirds vote within 60 days.