Peters has lately attempted to cultivate a common-man image 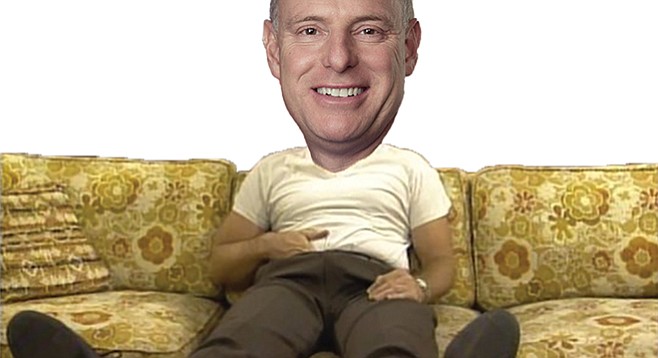 Democratic congressman Scott Peters, who has fought off a series of GOP challengers for his La Jolla district seat, is behind a new effort to divert San Diego Democrats from policies favored by the left. The New Democrat Coalition is “a group of pragmatic, problem-solving Democrats committed to pro-growth, pro-innovation, fiscally responsible policies in Congress,” said an emailed invitation to a September 17 $250-a-head fundraiser for NewDemPAC, the group’s political action committee, which is chaired by Peters. “I’m hosting this meeting with some of my colleagues — Reps. Kathleen Rice, Pete Aguilar, and Juan Vargas — to introduce San Diegans to the coalition and let them know how they can help elect like-minded leaders to join our ranks.”

The PAC raised $1,022,485 during the first half of the year, with just $105,985 coming from individual contributors, according to federal records. The largest single donation of $62,000 was made by the Caterpillar Employees PAC. Cable-TV giant Cox Enterprises gave $35,000. The Emerson Electric Co. Responsible Government Fund came up with $21,000, and Pfizer PAC provided $18,000. California high-tech venture capitalist John Doerr kicked in $5000.

Married to mega-millionaire Lynn Gorguze and closely aligned with Qualcomm billionaire Irwin Jacobs, Peters has lately attempted to cultivate a common-man image. In May, he told MarketWatch.com, “After I got out of college, I had some debt, but it was entirely manageable. It never really affected my ability to buy a house at the right time, get married or buy a car. That’s very different from what we see today.”

Common man? Just like Trump is a common man, as in not at all. Or so many of those who are mysteriously rich after a couple terms in office. He, unlike most of them had his own money pile, courtesy of his wife.

Neoliberal thinking like this is what has made Democrats the minority at almost every level of elected government in most every state and the nation.

Unless the Dems stop trying to be "Republican Lite" and become the party of social responsibility again, they will continue to sink into irrelevance.