“If you challenge her, she will leave trash in your front yard.” 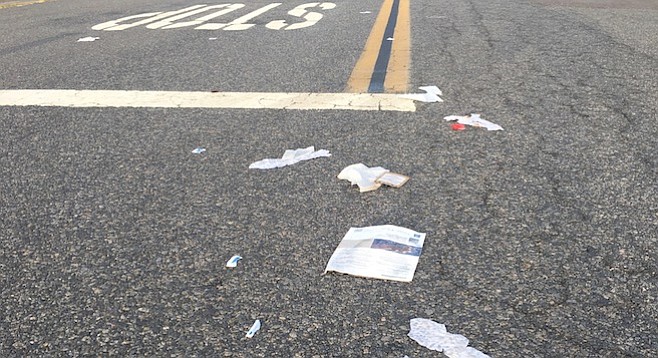 Residents of the Poinsettia Heights neighborhood in Cardiff by the Sea have a trash problem. Often residents will wake up in the morning to find trash strewn on their street.

The problem has been going on for some time. Neighbors on the community-based website NextDoor have identified the trash as coming from a 58-year-old resident who has mental health challenges. She lives at the end of one of the community’s 17 streets east of I-5, off Birmingham Drive.

“She must do it before 5:30 [a.m.] because that’s when I leave for yoga, and I see it then,” said Diane, who lives a few streets away from the woman. She’s noticed trash on my street recently, five blocks away. “If you challenge her, she will leave trash in your front yard,” said Diane.

Sure enough, while looking for information from other neighbors on NextDoor, I was possibly hit on September 29. Previously I’ve seen small trash bags deposited on my street, but this time I found loose refuse — napkins, a Watchtower magazine, and packaging from a pair of women’s shoes. And then there was haz-mat–type stuff: numerous baby wipes (used), open alcohol swipes, and disposable vinyl gloves. Strewn on the street in front of three homes, the trash filled a small-sized trash bag.

According to several postings on NextDoor, the woman doesn’t pay for trash service. But on September 29, the house had one blue (for recycling) and three green-waste collection bins curbside. All the cans were emptied by EDCO, the city’s trash-collection service. But there was not a gray-colored EDCO bin out for general trash. A customer-service person with EDCO said that while all of their trucks have a list of active customers, it’s possible that trucks picking up the blue and green bins might do it as they go from house to house down a street; but drivers of the trash trucks collecting the gray bins will not empty them if there is not an account.

“You don’t want to get on her bad side,” said a close neighbor a few houses away. “She has good days and bad days. Sometimes she can be your best friend, or your worst enemy.” The neighborhood has held meetings with the sheriff’s department. “We don’t know what to do anymore,” the neighbor said.

One resident, Tim, confirmed by phone that he is putting up security cameras soon in order to gather evidence. So far, photos submitted and video taken has been too grainy, said Encinitas sheriff’s deputy Kevin Norie. “It is an active investigation,” he said, but they lack evidence.

Norie said he is working with the city’s code-enforcement department. He encourages residents to submit pictures and video. “Most don’t want to be up at two in the morning, but our deputies are doing regular patrols in the area,” said Norie.

If any of the residents are looking for a good surveillance system, they can try dropcampro Wi-Fi Video Monitoring which has excellent night vision capabilities and compared to other systems is very economical: you can get one through Home Depot refurbished for super cheap. Good reviews on tech websites, and super excellent customer service.

Collect all the trash that she leaves in the neighborhood and deliver it to your worthless city councilperson.