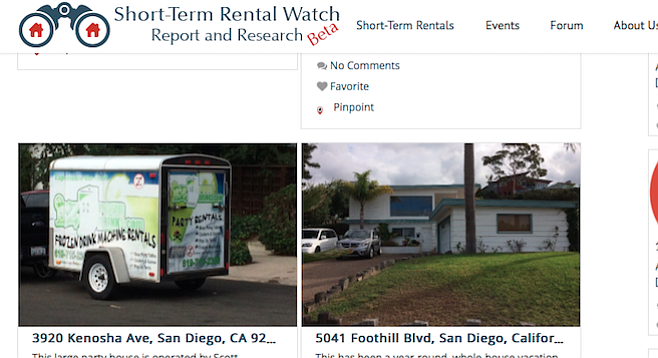 There have been protests, meetings, petitions, and lots of blowback directed at the City of San Diego for allowing the proliferation of short-term vacation rentals in residential zones and the lack of enforcement of current laws. On December 12, the San Diego City Council will host yet another meeting to address the issue. 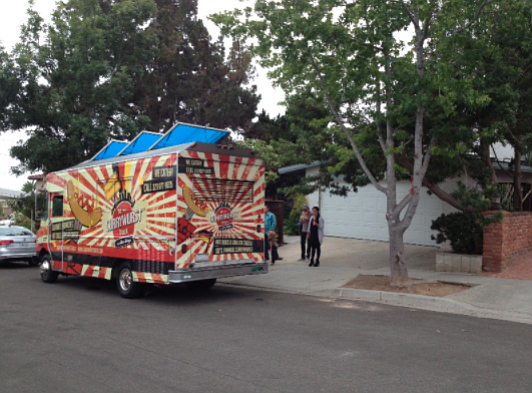 In the meantime, residents who live near or next to a short-term rental that causes problems now have an outlet to vent their concerns.

Launched by a group named Healthy Neighborhoods Network, the Short-Term Rental Watch website enables users to upload information about rentals near them, whether they're problematic or not.

Since the site launched on November 21, frustrated neighbors have started listing party houses.  An example of one such listing is a home at 3920 Kenosha Avenue in Clairemont.

The problem house’s “profile” reads: “This large party house is operated by Scott Chipman of Pacific Beach. Mr. Chipman is a community activist in PB speaking out against marijuana dispensaries and alcohol licenses in his neighborhood. What is not acceptable in his back yard, is apparently just fine in Clairemont: Bachelor parties, weddings, etc....”

The listing is accompanied by photos of party-equipment rental trucks, a food truck, and even a frozen-drink-machine rental trailer — a business that also offers beer-pong tables, pop-up tents, coolers, and yard games.

One of the most common complaints, aside from the noise and nuisance, is not having access to someone responsible for their guests’ behavior — absentee homeowners are not uncommon. Some rentals are run (or owned by) investment firms or out-of-state/overseas owners. Some are run by property-management companies that don’t operate 24 hours a day, leaving neighbors with little or no options aside from calling the police or listening to another all-nighter. Some have irresponsible owners who ignore the complaints.

Another example is near Kate Sessions Park at 5041 Foothill Boulevard:  “This has been a year-round, whole-house vacation rental for 8.5 years!!! It is a hotel.  It is occupied 200+ nights a year and pulls in over $9,800 per month. Owner does not respond to complaints and requests for assistance with renters.”

And this one, located at 1335 Tourmaline Street in Pacific Beach: “This house is rented out on during school vacations and summer to short term renters while the owners travel. There is no way for them to monitor their renters. They also have an illegal detached granny flat rental that they built as an 'office' and it is also used as an STVR as well as a longer term rental year round.”

According to the website creator (who wished to remain anonymous but is affiliated with the CureSTR website), they will be adding a list of events related to vacation-rental protests (such as town halls and council meetings), provide links to proposed ordinances and other documents related to vacation rentals, and create forums to discuss the problems.

Since the City Attorney has already said that short term rentals are illegal, perhaps we should be reporting all rentals via the city's Get it Done application. Sure, our do-nothing mayor is ignoring the law, but at least there would be a record that he has to own up to.

Know a short term rental? Report it using the city's own application.