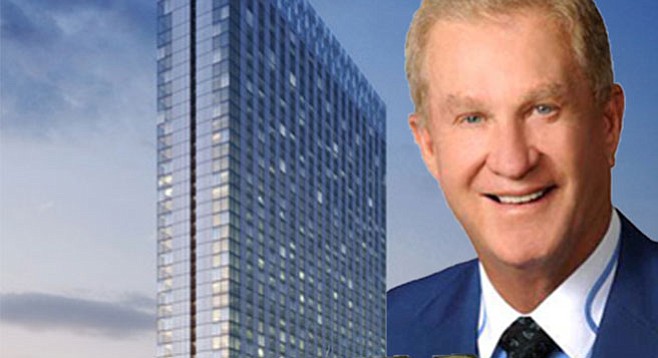 While ex–Union-Tribune owner and long-pending Trump ambassadorial appointee to the Bahamas Doug Manchester awaits financing for his Navy Broadway complex in downtown San Diego, the opening of his new convention hotel in Austin, Texas, also continues to face delay. “What’s important for people to know is that Fairmont Austin remains on track to open in early August,” Manchester’s son, also named Doug, told the Austin Statesman back on March 9 after a legal battle broke out between contractors over allegedly subpar work and understaffing of the project.

Now the grand opening is likely to slip into next year, per correspondents on skyscraperpage.com. “Grapevine has rumors of more delays. May not be ready till late Jan/Feb. Not sure what the hold up is, but could be the porte-cochere problem again. If you drive by there’s nothing in place and you can see the ragged attachment points where it ripped away from the curtain wall.”

“The Board of Managers statement said Manchester is no longer a member of Forest Creek, but that he continues to hold our club in the highest regard and deeply regrets not being able to proceed with the transaction,’” the Moore County Pilot reported November 3. According to the paper, the La Jolla–based developer owned a mansion in Pine Creek until last year, when he sold it for approximately $1.8 million.

Papa Doug Manchester's troubled hotels sound like Governor Jerry Brown's bullet train --costing a fortune but going nowhere due to delays, cost overruns and lack of leadership. And, come to think of it, like President Trump's SOHO hotel in New York City that he (or the kids) recently walked away from for lack of tenants.