“Is there sufficient reason for the tears that will inevitably run down my face by the end?” 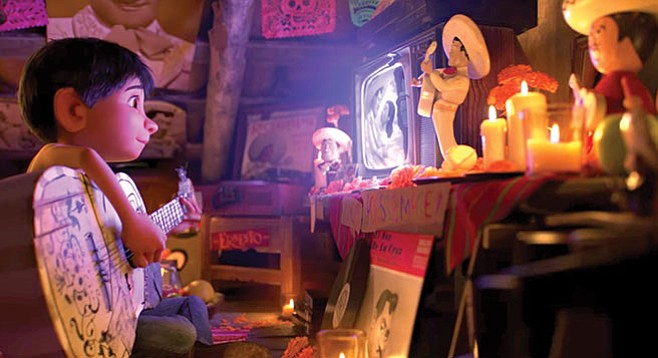 Smash the American Idol. Still The Voice. America’s Got Talent, but let it stay at home and delight the household and its gods (or at least its ancestors).

But what if the household is not delighted? What if there is a familial ban on music because, four generations back, a man left his wife and child behind to share his music with the world and then never came home? What young man in such a home, feeling the rhythm thrum in his heart, would not be tempted to look elsewhere for guidance? To look, as lost and struggling people tend to do, to the stars? 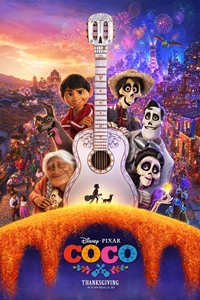 This is the plight of Miguel Rivera, the 12-year-old Mexican boy at the heart of Pixar’s splendid Coco — though it’s telling that the film is named not for him, but for his great-grandmother, the little girl who got left behind by her beloved singing Papa. Miguel’s family loves him, but not his musical dreams. So he turns to his town’s famous favorite son, who also happens to be “the greatest musician in Mexican history,” Ernesto De La Cruz. He learns his songs, watches his movies, even builds a secret shrine that is not unlike the ofrenda his family sets up on Día de los Muertos, the day for remembering and honoring the dead.

The holiday becomes the breaking point. “Seize your moment” is De La Cruz’s motto, and Miguel decides that the town’s holiday music competition is his. But his family notes that family is the whole point of the holiday, and insists he stay at home. When he rejects his family and sets out to disobey their decision, he winds up further from home than he could have imagined: in the realm of the dead.

Of every animated film, ask, “Is there any compelling narrative reason why this should be animated?” The expressive skulls of Miguel’s skeletal ancestors and the gently glowing world they inhabit make for a resounding “yes.”

Of every Pixar film that deals with family, memory, and loss (Up, Inside Out, The Good Dinosaur, Toy Story, etc.), ask, “Is there sufficient reason for the tears that will inevitably run down my face by the end?” Again, the answer is yes, thanks in no small part to the ingenious, repeated use of De La Cruz’s most famous hit, “Remember Me.”

And of every animated animal sidekick, ask, “All silliness aside, is this really necessary?” Yes, yes, yes. Dante the street dog — hey didn’t someone by that name take a trip to the afterlife once before? — is a slapsticky cockeyed clown on a serious mission.