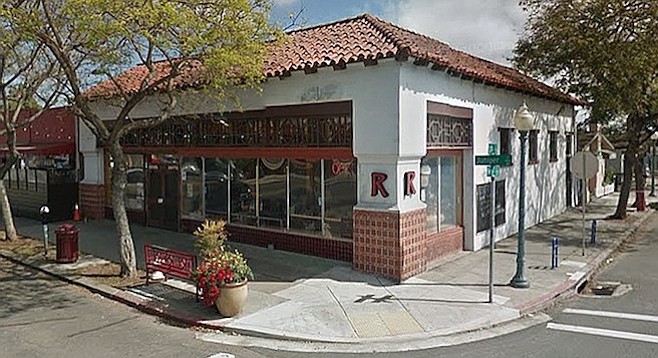 Rebecca's Coffeehouse is being ousted. The South Park staple has been on the corner of Juniper and Fern streets for more than 20 years, offering up more than just a cup of joe — it has a long history of hosting open mics, jazz trios, and poetry readings. 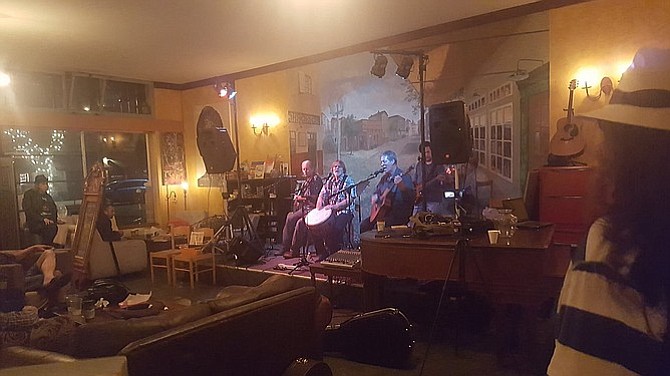 Rebecca's has been a haven for musicians, artists, and poets.

I talked to the owner, Rebecca Zearing, on November 16, to ask how a "For Lease" sign ended up in her shop window.

"The owner, he gave [the building] to his son to run," said Zearing. "And his son, as he likes to tell you, is a Harvard MBA and went to USC, lives in Manhattan Beach."

Zearing said her landlord now wants $8700 a month. She said her previous rent was about half that.

"I talked to another woman," said Zearing. "She's a therapist. Same thing happened. Her life is now run by a 28-year-old kid."

Tony Franco, the realtor handling the lease listing, said, “I love Rebecca's. I loved open-mic nights. I played guitar myself. I think it's a cool spot."

Franco clarified that "The son is only helping his parents, he isn't taking over. The son is just helping to manage it now."

I asked Franco about the doubling of Zearing's rent to $8700.

"No. [The landlord] offered her the same space for a slight increase than what she had been paying. It was still well below the market rate and she never responded. So she was given notice to leave by the landlord."

Where did Zearing come up with the $8700 figure?

"She came up with that when we started marketing the property, once we couldn't strike a deal with her."

According to Franco, Zearing was given notice to vacate by sometime last week. As of November 16, she was still open for business when I called to interview her. Franco said the landlord is handing things over to his attorney to evict Zearing.

Since the listing went out, Franco said he has been getting calls non-stop from businesses wanting to lease the corner spot. He said he's been surprised at how many offers have been well above the market rate: no offers have been accepted yet and it's available for $9500 a month "or best offer."

I asked what kind of tenants are vying for the spot. Franco said they are all mom-and-pop shops. "No chains. No national name brands. South Park would kill me. Right, ‘Let's put in a Starbucks there.’ I'd be a dead man walking."

I wasn't able to touch base with Zearing again on November 16. I wanted to ask some follow-up questions based on my conversation with Franco.

Oh, poop! There goes the heart of the neighborhood.

Remember too, that commercial property also enjoys the Prop. 13 property tax cap. So there are very few things that raise the cost of managing the property. With capped property taxes, depreciation, interest expense and other deductions, the cost of managing the property has very subtle increases. Particularly if Rebecca has a triple-net-lease (which is common), she is paying the most of the building expenses.

Greed has taken over our society and it is slowly crippling and destroying our society.

"Rebecca's has been a haven for musicians, artists, and poets."

The arts venues are constantly shuffled as the value of real estate changes. There was a time that the Gaslamp was home to many creatives, then Little Italy… If you have real estate that you feel is undervalued, invite artists and musicians there. Property values will rise and then you can kick them out and reap the profits.

I wonder what will happen when the commercial market shifts and the greedy landlords can't find anyone to rent their overpriced properties?

Scones. It's a shame, BUT all they have is scones. bad coffee, workers who seem to feel they're doing you a favor by allowing you to order a scone, depressing dark dusty atmosphere with couches that look they were hauled in from the side of the freeway.

Rebeccas doesnt even need half that space, I'd hate to see em go, but really, there's other available spaces in the neighborhood that can handle what they do there. A move wouldnt be the worst thing in the world. Cuz really, besides some carafs and a display case the rest can stay there. AInt no need to move a board game with half of the pieces missing.

But again, those scones are killer. everything else, ... meh

The place was dirty, the coffee weak, and the employees acted as though they were doing you a favor every time they took an order. Bring on the Starbucks!

Agree!! Time to get something new. Anything would be an improvement over a place with furniture from the dump. Perhaps even a place that isn't pre 20th century that takes credit cards.