The Square is lengthy, sometimes luxuriating in its long takes...to the point of discomfiture 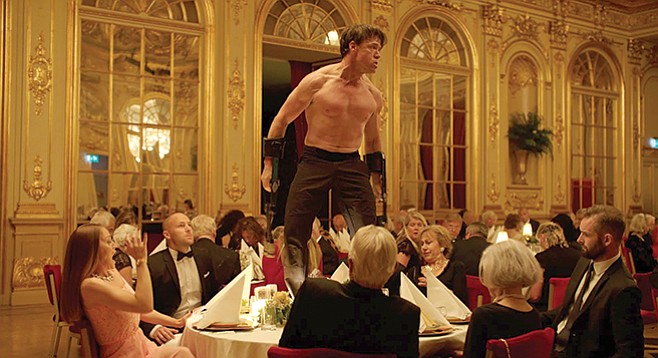 What is The Square? Well, it’s a piece of art, so there are no doubt any number of interpretations. But I’ll hazard a guess: The Square is writer-director Ruben Östlund’s latest salvo against institutions that, whatever their former virtues, are now, in his view, rotten and hollow to the point of collapse. In Force Majeure, he went after the traditional family. Here, he widens his scope to take in Western civilization.

What is the Square? The Square is, as we are repeatedly told, “a sanctuary of trust and caring. Within its boundaries, we all share equal rights and obligations.” The square is, in other words, liberal democracy’s dream of itself. 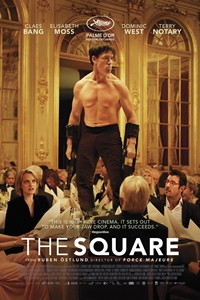 What is the Square? The Square is the next big exhibit planned for a Stockholm modern art museum by its curator Christian (a handsome but increasingly bedraggled Claes Bang): a literal square, cut into the cobblestone and outlined with light. As he explains to a self-satisfied crowd of cultural elites, if someone is in the square with you and makes a request for help, you must help. You might almost call it a Christian ideal. (And no, that joke is not beneath this movie, which sends a riding vacuum cleaner weaving through an exhibit made from piled pebbles. Guess what happens?) Everyone applauds — yes, yes, fine, fine — but these sophisticated souls can’t be bothered to hear the chef describe his latest creation before stampeding off to lunch. They imagine themselves aesthetes — they support the museum, don’t they? — but they’re barbarians at heart.

Östlund is having none of this Square business, not when just outside its boundaries there are beggars and thieves aplenty. And certainly not when its own advocates fail to abide by its credo. (Where, exactly, is that bright line indicating the boundary?) Christian is generous to beggars when it is convenient or pleasant to be so. Often, he simply insists that he has no cash. When one beggar tries to be a chooser as well, he reacts with disdain. Who do you think you are? And when thieves make him a target — notably, by appealing to his sense of virtue — he tosses civility to the wind in the quest to recover what’s his. Had he suspected a coworker, he might have proceeded differently. As it is, he is able to place the culprits firmly in the category of “them” — the people outside his personal square.

The Square is lengthy, sometimes luxuriating in its long takes to the point of discomfiture. And it is disjointed, sometimes head-scratchingly so. But it is also mostly coherent, so when a scene feels random, it’s probably wise to pay attention. In one of these, curator Christian is entirely absent: instead, a museum bigwig is interviewing a visiting artist before a crowd of attentive culture vultures. But the proceedings are continually interrupted by the vulgar outbursts of a man with Tourette syndrome. The high-minded interview is completely sabotaged, yet nobody asks to have the man removed. Even as he shouts “Show us your boobs,” another attendee admonishes the crowd to “show some tolerance.” We never hear from Mr. Tourette again, but we don’t need to: he’s done his bit to give us the film in miniature. Western culture — that lovely place within the square — is being destroyed, but nobody’s willing to save it because doing so would involve intolerance.

It’s also wise, in a movie set in the rarefied climes of a modern art museum, to watch the monkey. Your proverbial bull in a China shop (yes, I’ve seen the posters for the upcoming Ferdinand), has nothing on a monkey in a movie about a modern art museum. And The Square has two. The first shows up at the apartment of the spunky journalist (a daffy Elisabeth Moss) that our hero decides to bed — or to use his word, “conquer.” He’s goaded into saying that, but it fits with his claim that there’s no use in pretending that women aren’t sexually attracted to power. How primitive! How primal! Just like the monkey! Never mind all that nonsense about trust and caring; sex is about conquest and possession. (A point driven home by a weirdly funny post-coital debate over who gets to take care of the loaded condom.) The second shows up in the form of a performance artist who commits everything to his impersonation of a gorilla at a museum gala. The results are equally instructive. When the beast gets beastly, so do those who fancy themselves human.

The whole experience is rough going: sometimes numbing, sometimes horrifying, sometimes merely baffling. There’s a kind of artful artlessness at work here. Remarkably, Östlund seems to end on a hopeful note, suggesting that Christian’s Squares really do exist, and that those who live outside them may watch and learn and, if they can humble themselves, even step inside.