“Knock some sense into this bitch.” 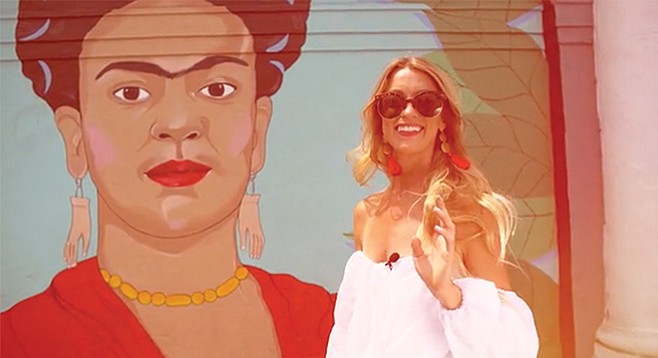 On October 26, Jenny Niezgoda launched a Kickstarter campaign for La Gracia Modern Fruiteria, a café and coffee bar she planned to open in Barrio Logan. Hours later, with 14 backers and $812 of her $35,000 goal, she began receiving death threats. Niezgoda canceled the campaign and removed the video that incited the swift and ruthless backlash, but it was too late — copies had already been made, and it was going viral.

“I felt really bad for her,” says Cassie Chavez, one of the hundreds of thousands of people by now who have seen the video. “I could tell she was really well meaning, and so enthusiastic — I just really wish she had shown that video to people before posting.” 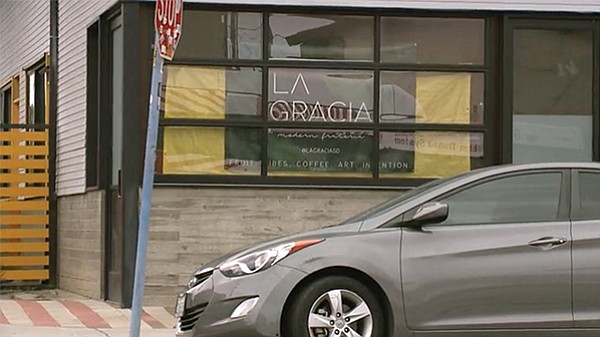 What was to be Niezgoda’s frutería earned a graffiti tag as her plan withered.

In the two-minute video, Niezgoda is seen walking around Barrio Logan and explaining her business concept for her “Mexican-inspired juice bar.”

As described by Alex Zaragoza, editor of Latino culture website Mitú, in an excoriating breakdown, “[Niezgoda] struts effortlessly through the neighborhood in an off-shoulder top, posing in front of murals of Frida Kahlo and Cesar Chavez while Latin-sounding guitar plays in the background. She turns in slo-mo, whipping her long, wand-waved locks around and dropping a toothy smile into the camera.”

Chavez recalls, “Watching the video, I had a visceral reaction to hearing her shout at the end, ‘We’re bringing a healthy option to the barrio!’ Like, ‘You’re not healthy now.’ Also, ‘barrio’ in Spanish means ‘neighborhood,’ and some people don’t realize it also has a secondary meaning. When an outsider says that, it sounds like, ‘I’m bringing a healthier option to the ghetto.’”

One post had over 500 comments, a number of which referred to to Niezgoda as “Becky,” a nickname for egregious white women. For example, Holly Tjaden wrote, “Omg, Becky, don’t white girl giggle your way through ‘introducing’ something from Mexican culture to a Latino neighborhood in SAN DIEGO.”

Erik Ramon Campos wrote of the architect Hector Perez, “The guy that owns that building I hear is a whitewashed Mexican who likes to bring in ‘decent’ people to improve the hood. I say you target him first before anyone else cause that’s where the power is. Sooner or later another Becky will come along even if this one packs her bags and goes back up to north county coastal.”

Dara F. Thomas added, “Becky With The Bad Business Plan ’bout to get her brazen butt booted out of the Barrio… #Gentrifier #CouldYouNot #ThanksGirl.”

Along with accusations of cultural appropriation, many took issue with Niezgoda being Caucasian. On one comment thread, a woman named Kelly Alva published a list of “white owned businesses in Barrio” along with the note, “Don’t support them. Don’t be friendly to them. Don’t give them your money. Shut them down by any means necessary.”

One of the local residents Zaragoza quoted in the Mitú piece is Betty Bangs. Though the quote in the article was innocuous enough, Bangs made a public Facebook post that was more threatening: that her first reaction to seeing the Kickstarter campaign was “to take my hoops off and knock some sense into this bitch.” Another woman, Jessica Mercado, wrote, “Girl needs to get jumped hard core.”

“Part of the reason I feel so affected by this is because just a few weeks ago, I ran into Jenny at a coffee shop and she was working on this project, and she was so excited to do something good,” says Quinn Wilson, author of the cookbook, Bone Broth 101: Essential Recipes & Age-Old Remedies to Heal Your Body. Though she “totally gets” that the video comes across as tone-deaf, Wilson is appalled at the ferocity of the response. “To get death threats, to have people threatening you — I can’t even imagine what that might be like. Her personal safety has been threatened because she wanted to open a business. She had to shut her email down. Not because she didn’t want to deal with it — I think she’s genuinely scared.”

The most popular complaints amid the overwhelmingly negative response have to do with appropriation and gentrification. Many also took issue with Niezgoda’s asking for money when, in her video, she spoke of traveling the world with her friends. “If you’re asking for $35,000 from the public, talking about your travels, with your expensive blowout and multiple outfit changes, in this expensive looking video with high production value, that just seems tone-deaf,” says Chavez.

“People say, ‘Oh, it’s an expensive video,’ but she and her friends shot and made that in a day,” Wilson says. “They’re picking apart the music she chose, they’re picking at everything — just because she doesn’t look and sound the way they think everyone in Barrio Logan should look and sound. I honestly know that she had no idea there would be this backlash, and that’s part of the problem. I mean, I get it, I understand where they’re coming from. My main problem is the violence.”

Though they are smaller in number, some community members have come forward to defend Niezgoda. They stress that she is kind, hard working, and well intentioned. “I’m sure it’s all true,” Chavez says. “But you can be lovely and sweet and kind and still complicit and unaware of systematic racism and gentrification. There are lots of people that work long and hard — that doesn’t make this person special, and it doesn’t give her a pass for such an incredible display of ignorance. It’s a very sad situation all around.”

“This is mob mentality,” Wilson says of the backlash. “You shouldn’t be able to scare someone out of what they’ve been working on for a year and a half based on a two-minute video. It’s too easy these days to forget that the person you’re bashing on the internet is an actual, real person. Granted, she didn’t go about it the right way, and she comes across as living in a bubble. But she can’t even walk down the street in Barrio Logan. She can’t even go to her space that she’s paying for.”

Two days after launching and canceling her Kickstarter campaign, Niezgoda, who has refrained from speaking to the press, issued this statement: “I deeply apologize that the video I created to showcase a project that is near and dear to my heart, offended anyone. It was never my intention. After much consideration, I have decided not to move forward with the opening of La Gracia in Barrio Logan. I’m saddened to hear and see many of the comments I’ve received over the course of the past 48 hours; but I also understand and respect their perspective. I have taken the time to listen to the concerns from each and every community member across multiple platforms. I simply hoped to be given a chance to create a small business powered by San Diego women, that provides opportunities to learn, engage, enjoy and grow in Barrio Logan.

“I remain passionate, committed and dedicated to building a place that offers vibrant, healthy and delicious food to San Diego as a whole. I believe in hiring an incredible team of diverse people that represent the cultural richness of San Diego and I believe in giving back to the community in which I live, work and hope to do business.”

As for Niezgoda, Wilson, who has spoken to her recently, relays, “She told me she’s hanging in there.”

Before one decides to go into business in a neighborhood one should do research including how the neighborhood will react to someone who will be a minority in that neighborhood.

Next story will be bemoaning the "lack of investment in underprivileged neighborhoods". I'm sick and tired of whiny, chip-on-the-shoulder "minorities" out looking for an excuse to be outraged.

totally agree. Racists like Mercado, Chavez and Alva are pathetic. Chavez lacks as much self awareness as anyone.

Left that place right after becoming a single parent, worked like crazy the year before my daughter turned two, but with my tax refund I invested wisely and...got the hell out. I saw no point in living there, since the rent no longer allowed savings...and home-ownership there at the time was littered with ARM offers, even with a decent credit score. There are some wonderful families and people trying to make something out of the place, but I just didn't see a point. Unless you raise local community home-ownership rates substantially you really don't have a community, you just have renters with a shared ethno cultural background, because at any moment they can be replaced; so no long term investment, involvement or development will take place otherwise. This would have been a great opportunity for people to approach Ms. Niezgoda and offer some insights or perhaps encourage her to seek a local partner from the community, maybe even members of the community could have set up a gofund me for the chosen local partner; but even that wasn't offered--only a racist cultural lynch mob ensued. It's sad, what's worse is the hypocrisy of the Mexican culture that argues for the use of the Spanish language to the point of exhaustion, but hardly ever bats an eye lid for the plight and near extinction of the indigenous languages of the Americas, much less the exclusion of Native Americans or Native Latin Americans. Excluding others as you have been excluded only makes you look as bad as them...