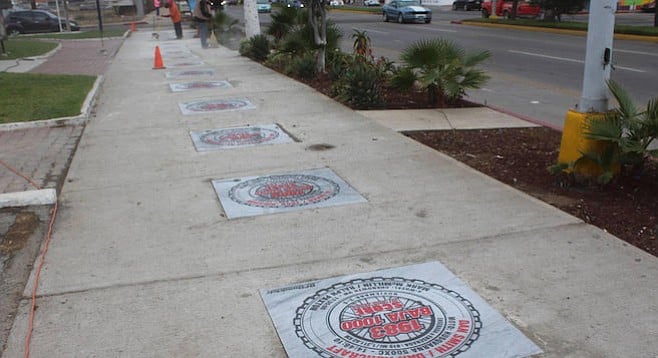 On November 8, at about 2 p.m, Diego Gomez admired the new marble tiles inlaid on Ensenada’s sidewalks.

Gomez was referring to the Off-Road Walk of Fame in which the tiles are being installed to honor vehicle and motorcycle winners from the Mexican 1000 (1967-1973) and Baja 1000 (1975-2016). The 49 tiles are located on the boardwalk in front of Riviera Cultural Center at Lázaro Cárdenas 1421, Bahia Ensenada.

While Gomez has been a big supporter of the races, he said, “There are people who think they are 'ecologists' who argue that [the walk of fame] should not recognize the destroyers of nature.”

The unveiling of the walk of fame was originally slated for November 12th but was then moved to November 14 (Tuesday) at 3:30 p.m.

The Riviera Cultural Center was once El Hotel-Casino Ensenada, which opened to the public in 1930. The establishment was visited by many Americans back then to escape Prohibition. On Tuesday, the venue will host an all-ages festival inside the “Riviera Cultural Center Gardens, with the exhibit of classic off-road vehicles and motorbikes and have legendary racers signing autographs alongside their vehicles,” according to the National Off Road Association (NORRA) website.

Following the sidewalk unveiling at about 6:00 p.m., the Baja Racing 50th Anniversary Ceremony will take place ($125 per ticket). This is a more exclusive event with more drinks, a three-course dinner, another ceremony to honor the Baja racing pioneers and the Baja 1000 overall winners, and a networking opportunity to mingle with Mexican officials, race legends, and promoters.

The original members of NORRA helped establish the Mexican 1000 in 1967, which became what we know today as the Baja 1000. 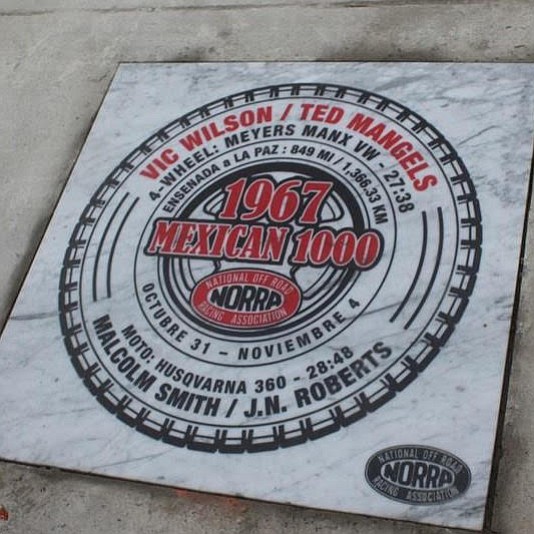 According to the first 1967 tile plaque mounted in the sidewalk, the inaugural race was won by Vic Wilson and Ted Mangels in a VW/Meyers Manx with a time of 27:38. J.N. Roberts and Malcolm Smith won on a Husqvarna bike with a time of 28:48.

On the last tile (2016), Rob MacCachren and Jason Voss won in a Ford trophy truck with a 17:12:58 time. Justin Jones, David Kamo, Mark Samuels, Daymon Stokie and Colton Udall won on Honda motorcycles with a 18:16:42 time.

On Wednesday at midnight, in front of the newly installed walk of fame, the moto and quad classes will start racing. At 10 a.m. on Thursday morning, the four-wheel vehicles begin their race.

And those tiles are missing because?