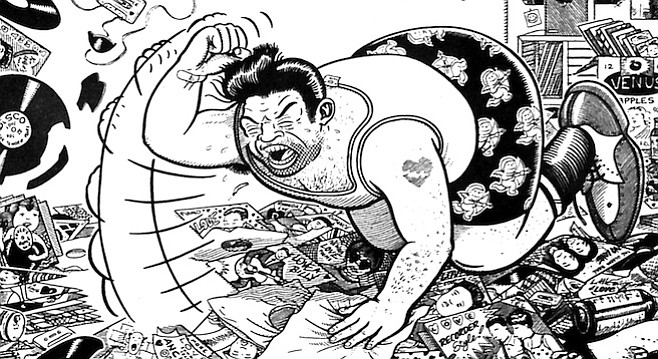 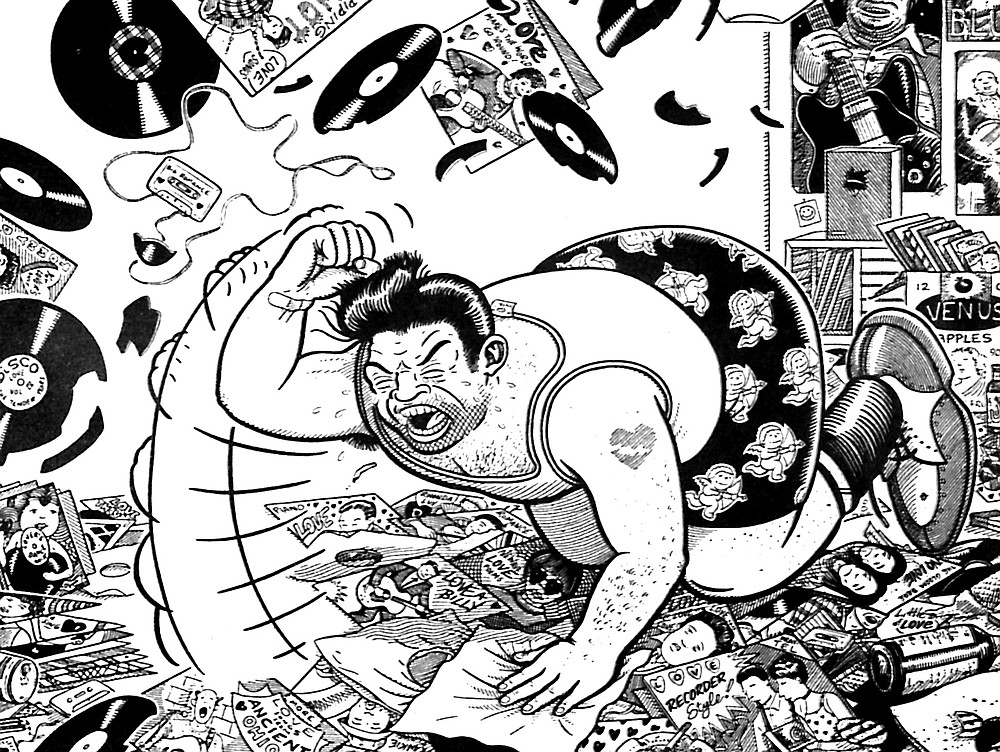 My record collection is a minefield of potential pain: stacks of Ray Charles, Robert Johnson, Otis Redding, Elmore James, Muddy Waters, Freddy King, Bobby Blue Bland. And, in recent years, a creeping insinuation of country and western music. I was telling myself I was getting at the core of rock and roll, the music of rebellion. Blues is the soundtrack to otherwise ineffable pain, and C&W, the music of resignation. 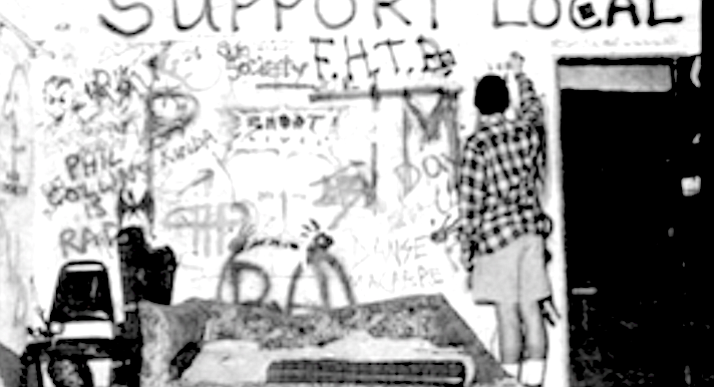 "You’re lucky if you get part of the door at SOMA."

There is an underground music scene in San Diego. It begins along a tiny stretch of the Pacific Coast Highway in Encinitas that mimics, in a desultory way, Haight Street or the hipper end of Melrose or Second Avenue near the Bowery. On it there are several used-clothing stores; a shop where you can get leather studs. Doc Martens, and lace tights; and two independent record stores, Off the Record and Lou's. 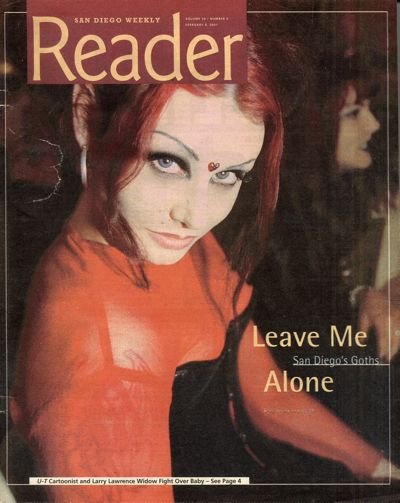 The sudden rise and notorious image of Marilyn Manson is partly to blame for the misunderstanding. Klebold and Harris both listened to Manson; a musician who plays with some of the trappings of goth. He is ghoulish, androgynous, and angst-ridden. The New Yorker said recently that Manson "channeled the Marquis de Sade by way of Alice Cooper," which suggests that he is in fact what most local goths told me he is — a poseur. 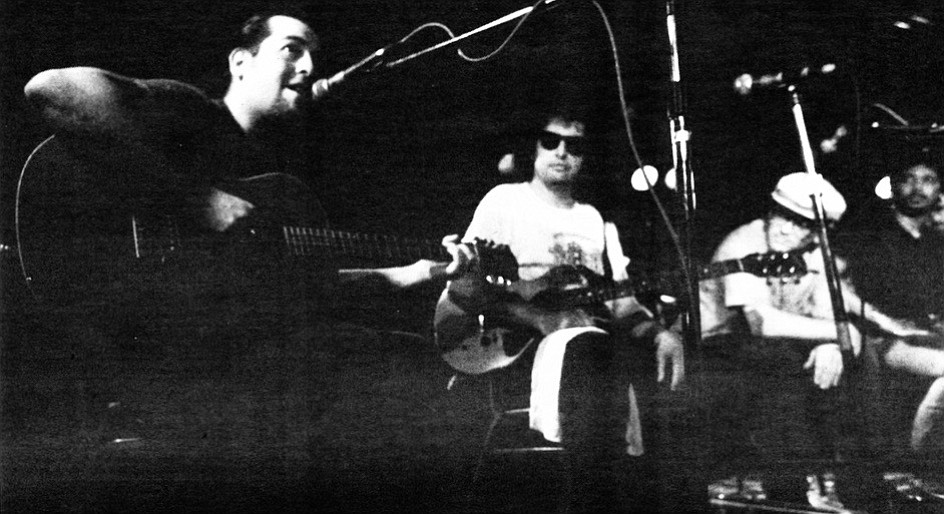 Rick Gazlay arrives looking like one of the Beach Boys from their post-“Good Vibrations” era or a psychedelic tennis pro. Shorts, paisley shirt, ponytail and red beard, a multicolored brow visor, guitar case. He greets Robin Henkel, who often plays around the corner from Gazlay in the Gaslamp, when Henkel is gigging at Croce’s and Gazlay is at Patrick’s II. An onlooker, also a musician, scans the five guitarists, grins, and says, “Roomful of blues, huh?” 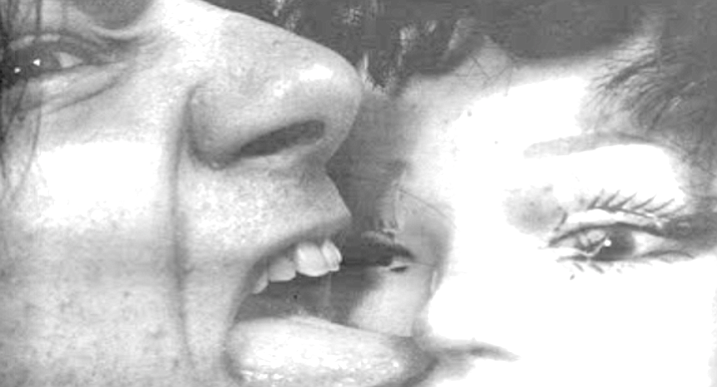 These Santee boys, graduates of Santana High School, have even been banned from the Spirit Club.

Eating people is the ultimate control

You won’t find Dahmer’s Diner on the bill at the Cannibal Bar in Mission Beach. In fact, DD has been banned from all but two venues in town, SOMA and Cafe Chabalaba, though they are embraced at certain clubs in Austin, Dallas, San Francisco, and Los Angeles, among other places. While they have been interviewed by the punk rock press ’zines from places as far away as Holland, they have real trouble in San Diego 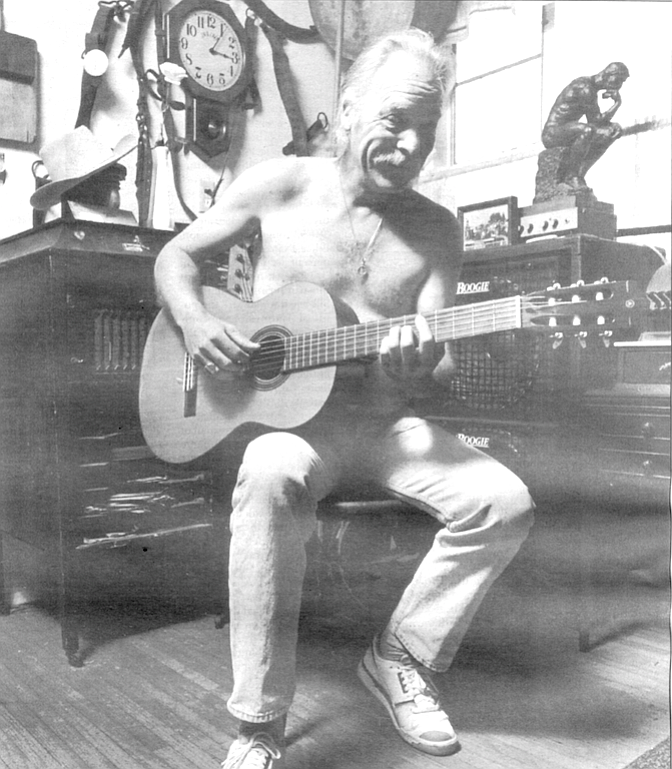 In Moby Grape’s heyday, Mosley was described by a Rolling Stone writer as a “gifted singer with a raw, earthquaking voice like some Viking warrior incarnation of Otis Redding.” He was diagnosed as a paranoid schizophrenic in 1970 while in the Marines and is now merely one of this city’s thousands of faceless indigents, according to a court document filed by his mother. 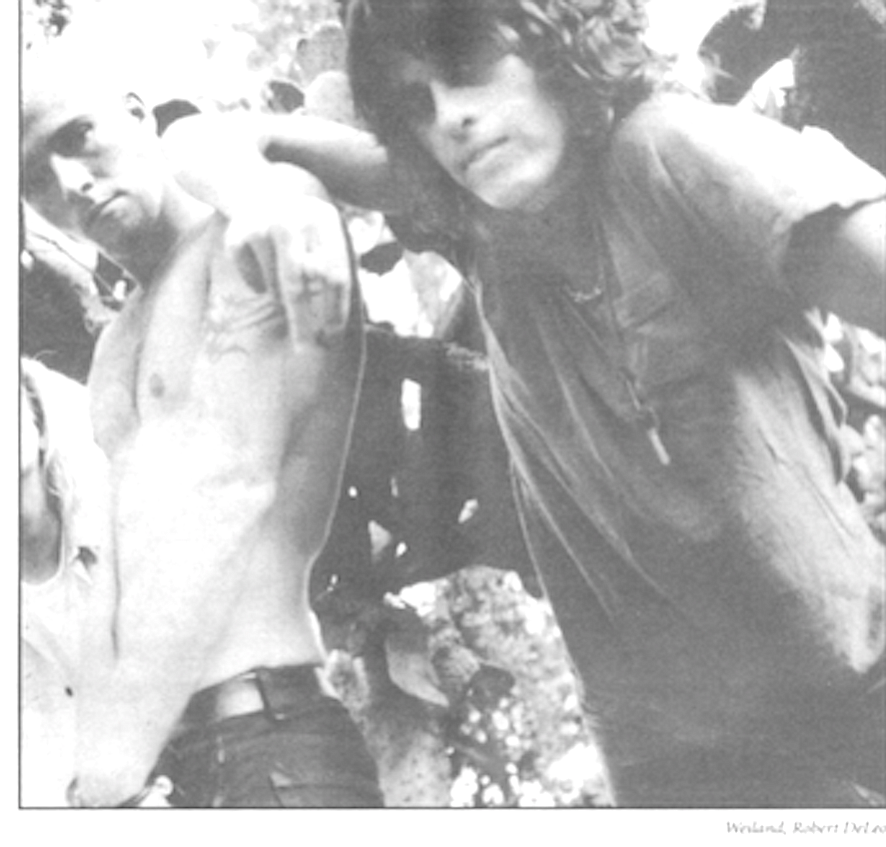 Weiland and DeLeo allegedly assaulted a fan in July.

“I had no clue why Scott [Weiland) picked me out of the crowd. I didn’t throw anything at the stage, ever, and that’s the truth. I didn’t hear what he said to the crowd before. I thought I was going to get to hang out with the band on stage. I went willingly. I definitely didn’t know they had violent intentions.” 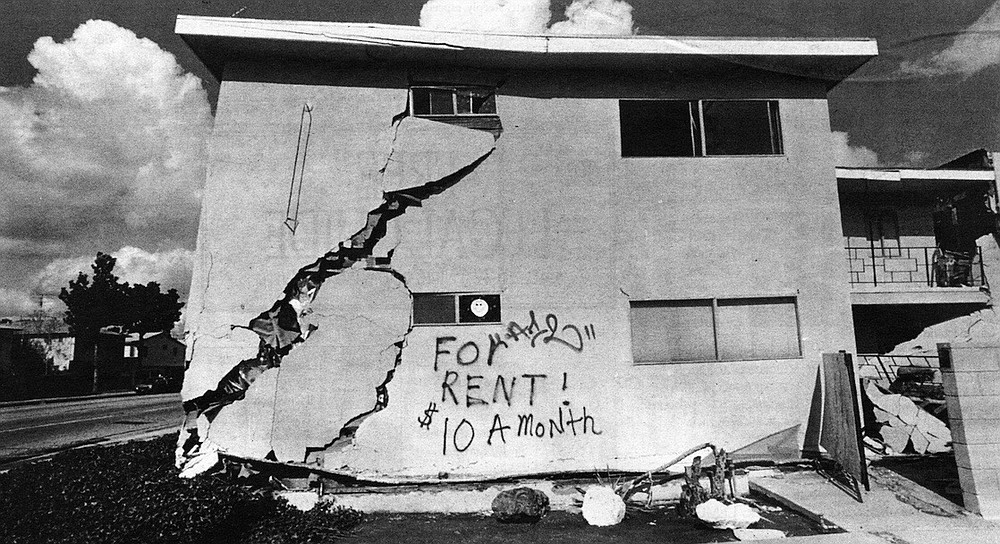 I think of all my poor records — how angry do you want me to be? I amass this massive stack — a collection, more than a collection, almost a library (people come over just to hear stuff; mags call me with “fact check” questions) — many many many of which will never be issued on CD. 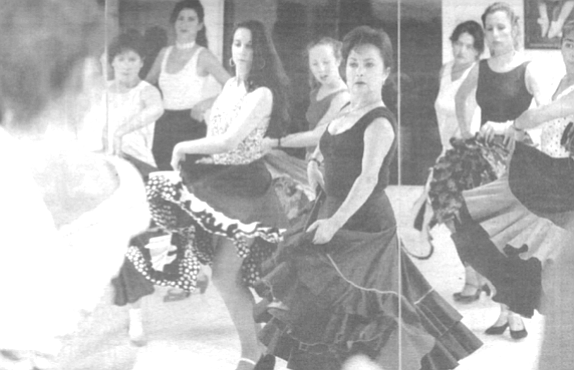 Juanita Franco. "She is, for my money, probably the best performer of the solea."

Every drive into San Diego, screaming south down I-5 past Pacific Beach, I’d seen it out of the right of my windshield. The strange Moorish building with the domed tower facing the freeway. Red letters outlined in dead neon tubing spells “Restaurante Tablao Flamenco” across a large windowless wall. Moorish arches outline panels with large bas reliefs of flamenco dancers and bullfighters. 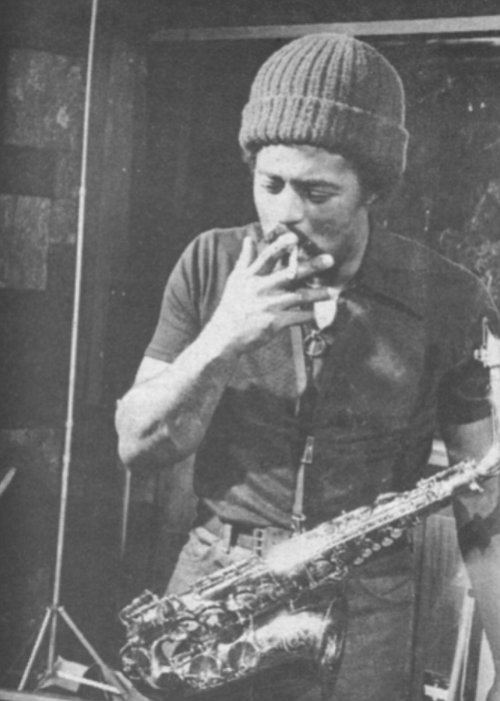 "The only kind of guys that would smoke pot back in those days were guys that liked jazz, kind of hipsters. And the other guy, who was more of a thug, actually, into doo-wop, and wine, and getting drunk, and fighting and cutting — you know, go to the party and breaking the party up; the kind of guy who was doing that was the kind of guy that didn’t smoke pot. That’s too damn exotic for him." 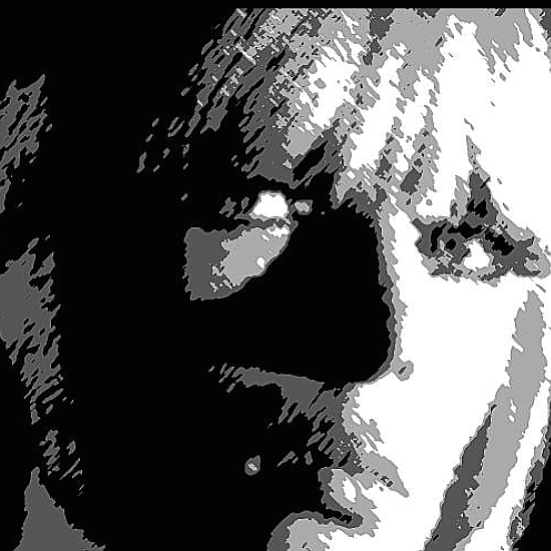 Girl in the mind garden

This is an essay by a nonteenager about a reissued CD, kind of obscure, joyful to listen to in its own right, and also a fascinating locus of semi-famous or legendary figures from the rock world in 1967: the first solo album by Nico, called Chelsea Girl. It spoke to me then (even though Nico was five, or maybe ten, years older than I was) to some extent, but I always thought (influenced by the point of view of fellow Velvets fans. 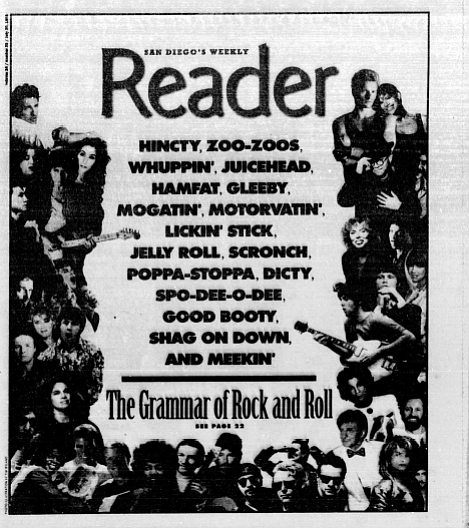 The grammar of rock and roll

It was modish, especially in the latitudinarian ‘60s, to speak of the lyrics of rock as “poetry.” And to a degree a certain few lyrics — quixotic, inventive, careening or reflectively lyrical — came sufficiently close. We tend to listen to lyrics, ponder the words, heed and harken to their advice. “And rock is also educational,” said Frank Zappa. “How to ask a girl for a date, what love is like.” 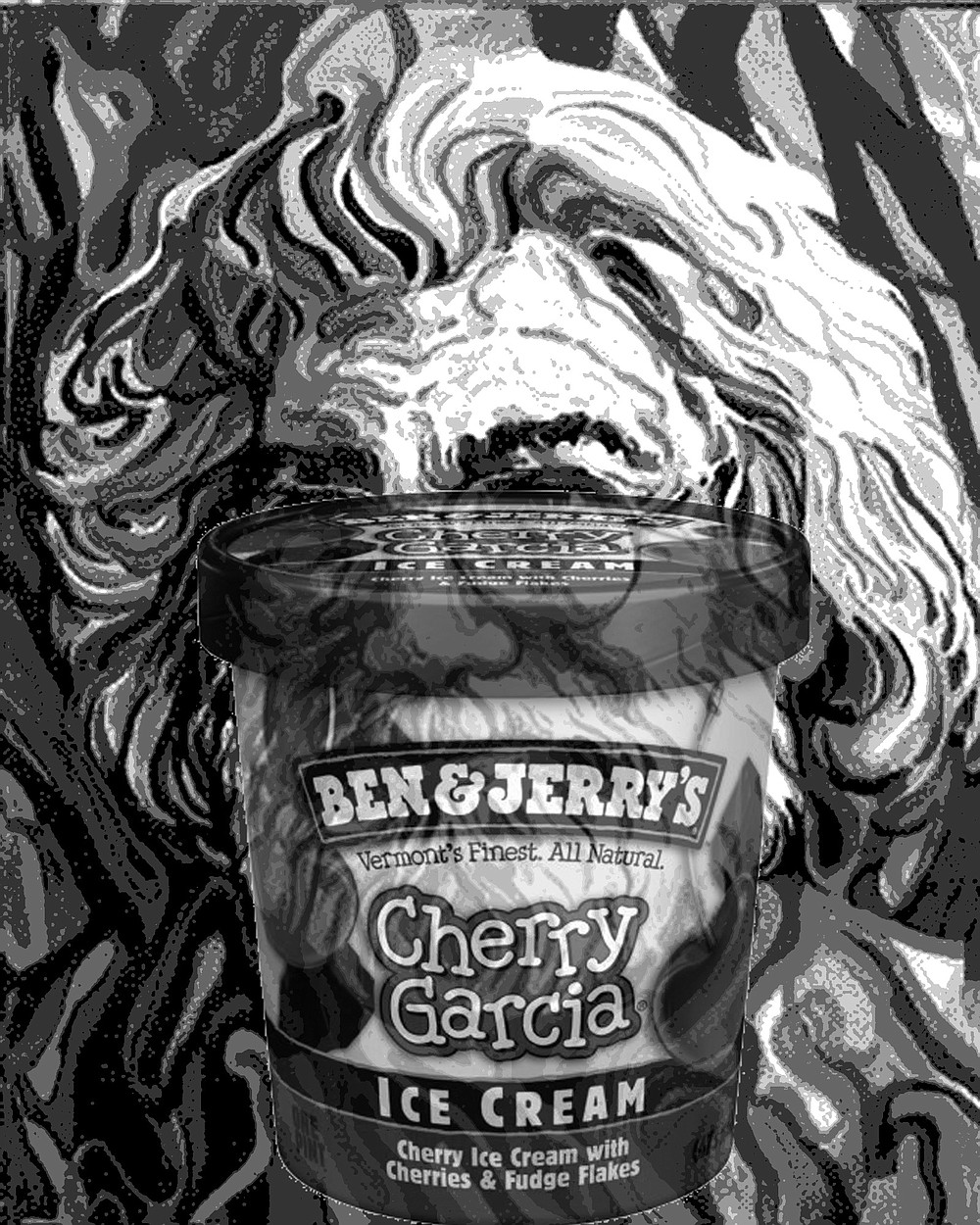 Of hairy guys and hungry dogs.

This was life on Haight Street, B.J.D. (before Jerry’s Death). Any time the Dead were coming to town — or Jerry was playing solo with the Jerry Garcia Band — for a week before and after the gig: Legions of stringy-haired girls sit cross-legged at every corner, asking if you want them to wrap your hair for $10. Equally hairy guys, the owners of sad-faced, poorly groomed, probably hungry dogs wander about asking if you want to buy some bud. 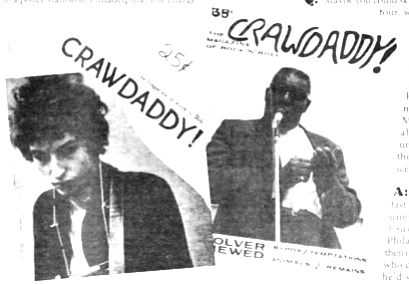 Issues #4 and #5. I guess Dylan was charmed by the idea of a 17-year-old kid putting out a rock magazine.

The Rolling Stones converted me to rock and roll (Beach Boys and Beatles had been tempting me too, but the Stones and the Kinks convinced me and made it all right), and Sonny Boy Williamson died and the Paul Butterfield Blues Band came to town. I was at the 47 all three nights. And then off to my freshman year of college, and I missed the scene,

When Elvis came to SD

Descending into Poway from Ramona in Sam’s new Chevy station wagon, a sliver of moon setting over the hills, “Blue Moon” came on the car radio. We broke out, “I saw you standing alone...” Funny. “Moonglow” was number one on the charts that week. But “Heartbreak Hotel” was creeping up. I’d never been to a concert before. I hardly knew what to expect. “So many girls,” my father gasped at the Arena. They dropped us off. “We’ll be waiting right here when you come out.” 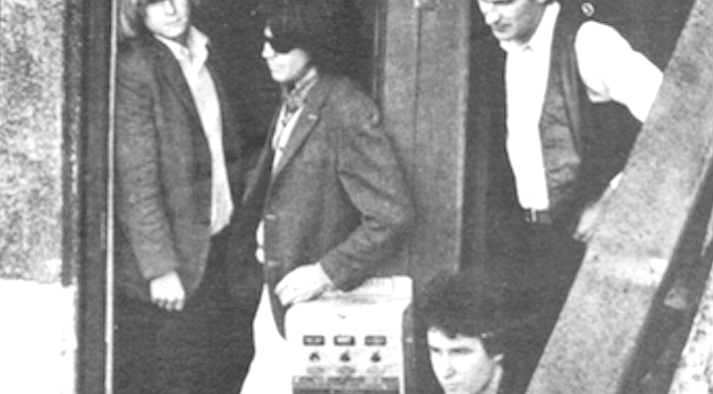 Crawdaddys: Steve Potterf, Ron Silva, Dan McLain (sitting). (McLain: "I’d been in the Penetrators two weeks when Ron asked me to be a Crawdaddy.")

The Beat Farmers were hardy survivors

They endured as a San Diego-based band, the first area act to achieve such a national/inter-national level of success and stay local, breaking a pattern stretching from before Iron Butterfly to after Ratt. Given S.D.’s insecurity about itself, it’s understandable how large and reliable their fan-base remained for so long here and how entrenched they stayed on the local musical landscape, even well after the group had started to repeat itself artistically. 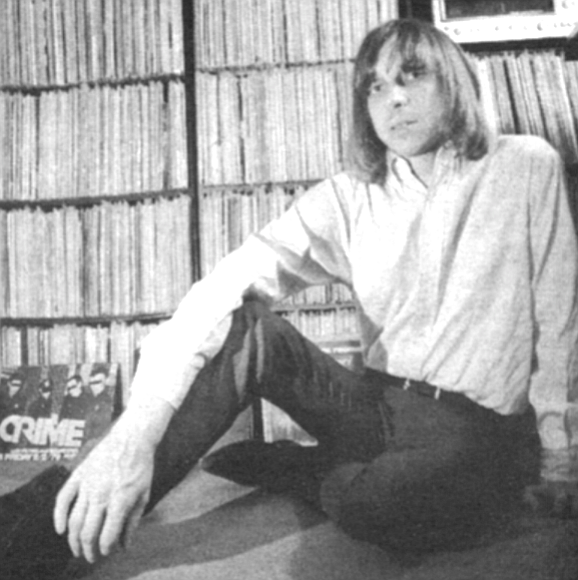 Stax came to San Diego from England. “I was a fan of a San Diego band called the Crawdaddys. They were playing something that sounded a bit like the early Rolling Stones or the Yardbirds."

"We had long hair already, and it was just a matter of toning it down and redirecting it. I remember my folks watching the Beatles on Sullivan, and overnight, literally within 12 hours, I went from beach boy to Beatle, and so did all of my friends. But there was local music that influenced even the Beatles. In Lennon Remembers, when Lennon was asked what he thought about American music, he noted the song 'Angel Baby,’ by Rosie and the Originals, which was recorded in an airplane hangar out in Santee." 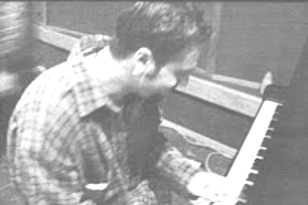 Pete DeLuke: “We were just animals, we couldn’t behave ourselves.”

I had always thought of heavy metal as a bonehead genre enacting the unsocialized fantasies of teenage boys—power chords, leather, the cartoon images of large-breasted warrior women in chains — and a threat to public health and safety; a dozen years ago, when I was still a music reviewer, I saw Twisted Sister and White Lion, who were so loud the noise pressed my contact lenses against my eyeballs. 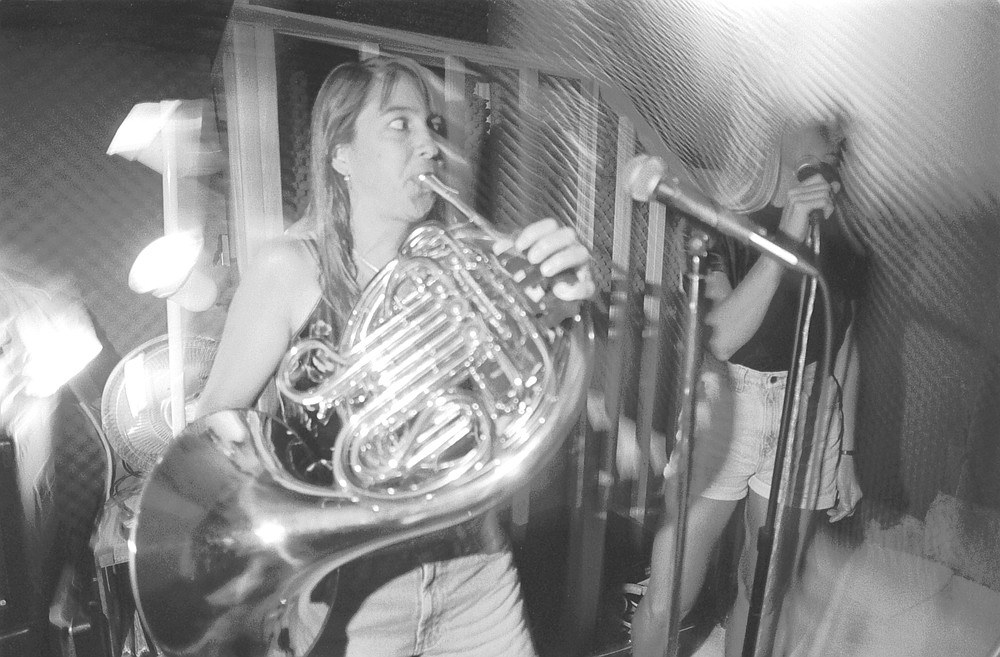 The author, Jennifer Ball: "I’m not very good, but who would know? I sound passable, even inspired at times, but I have a range of about an octave."

When I first met Morley, he was smoking opium over an open flame in a Mar Vista kitchen. I had lived in L.A. during the '80s and had seen a lot of things, but never anyone smoke opium with a bread knife held over a gas stove, the drug perched on the knife like a mound of sacrificial flour. In L.A., Morley, my husband, and I had been in a band called Milt and the Caviars. Morley had moved to San Diego and was a chef at a hotel. Two years later, my husband and I found ourselves here as well. 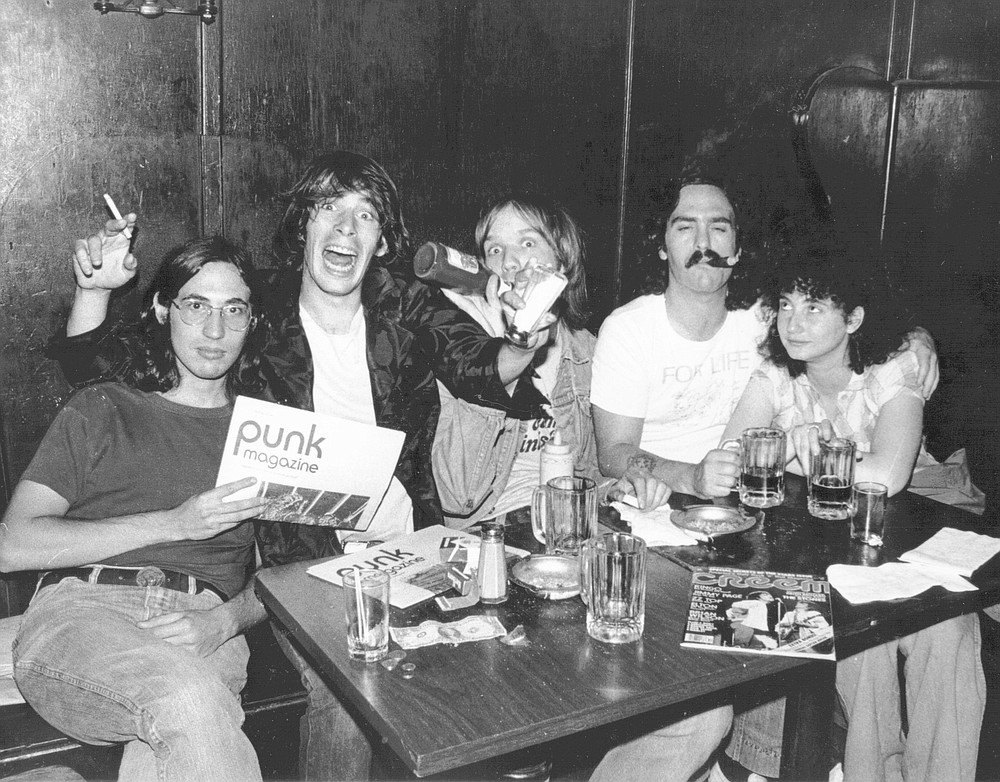 The first time I heard “I Can’t Stop Loving You” — wait a sec, we could look up the date. It was on the radio when I got home from watching Benny “Kid” Paret get killed by Emile Griffith, well, he didn’t die for 10 days, but the fight took place March 24, 1962 — Griffith knocked him out in the 12th and he never got up. I was in high school, it was the first boxing I saw live, and a few weeks later I bought my first LP, the one from which “Can’t Stop” was taken. 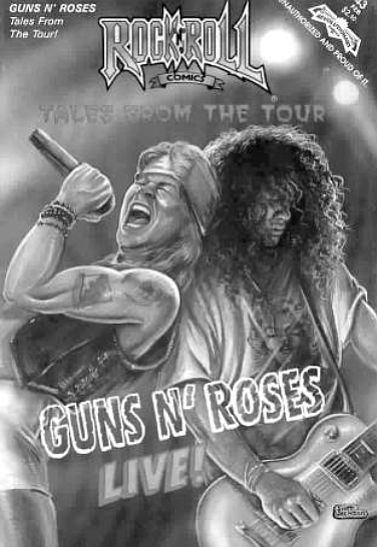 Dr. Dre didn’t give up a single usable quote during this taped phone chat regarding his debut solo album, The Chronic. My article instead ended up being about how many times the rapper said, “You know what I’m sayin’ ”without actually saying anything — 178 times in just under 20 minutes, averaging once every six to seven seconds. I still got paid for the article.