Look for the ring around the sun 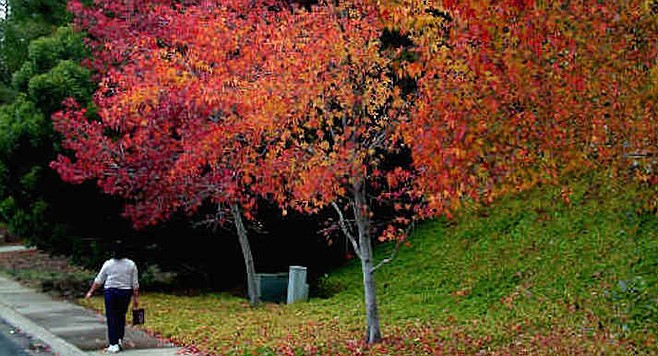 Atmospheric Ice-Crystal Effects are often observed, starting about this time of year, because of the frequent appearance of high clouds made of tiny bits of ice. The most familiar of these optical effects is the 22 ̊-radius halo, or ring, around the sun or the moon. Less often seen is a “corona” (a colored disk around the sun or moon — not the same as the solar corona seen during total eclipse), “sun- dogs” (colored arcs left and right of the sun), the sun pillar (a vertical column of light above the rising or setting sun), and a host of other rare and inconspicuous optical phenomena. All of the optical effects mentioned are a consequence of sunlight or moonlight refracting through or reflecting from the tiny facets of ice crystals in cirrus and other types of high clouds.

Liquidambar Trees, or sweet gums, the deciduous trees gracing front yards, parks, and campuses throughout the San Diego area, have been putting on an exceptionally colorful show. The leaves of some varieties turn to purple or red; the leaves of other varieties fade to golden yellow. Still other varieties hold on to their green leaves until sometime in December. Most liquidambars in our area regain their light green foliage by late February.

Sycamores, found in San Diego’s coastal and foothill canyons as well as in suburban and park landscaping, stand at their autumnal best this time of year. Stroll beneath their crispy, rustling canopies and catch the sunbeams scattering among their mottled trunks and yellow-brown leaves. Some of San Diego’s biggest native sycamores reside in López Canyon, a part of Los Peñasquitos Canyon Preserve near Sorrento Valley. Hundreds of sycamores can be also be seen in Marian Bear Park (San Clemente Canyon) along Freeway 52 between University City and Clairemont.