Solar vision of a refugee 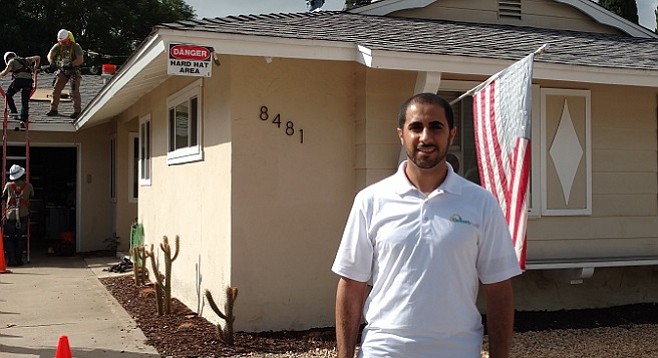 Hauter grew up with his family in Yemen while his father, a U.S. citizen, spent six months of the year working in the States, first as a farmer in California's Central Valley and later as co-owner of a newsstand in Queens, New York. In 2002, when Hauter was 17 and with the Middle East's relationship with America in turmoil following the 9/11 attacks and earlier bombing of the USS Cole off the shore of Yemen, his father brought him to California.

"My father decided, when I was close to finishing high school, that I should go somewhere with better potential," Hauter explains on a sunny Thursday morning in November. In the background, nail guns fire occasional reports as a group of volunteers install a gifted solar system atop a San Carlos roof on Beaver Lake Drive. "My dad didn't have a plan for why he was bringing me here. I knew I wanted to end up in a good college, but I didn't know the language at all. So what he did was that he left me with my brother-in-law, who needed help working in his store in Fresno.

"I met with a counselor who told me it made no sense to even enroll in college when I didn't speak a word of English, so I went back to high school and they originally wanted to place me as a junior. But I worked hard and halfway through the year I went back to see the counselor who acknowledged my progress, was surprised to hold a full conversation with me without needing a translator, and we worked out a plan to combine my 11th- and 12th-grade coursework so I could graduate after a single year."

All this happened while Hauter was working full-time at the family store. After a year in high school, he jumped from community college to Fresno State, receiving his baccalaureate in computer engineering while having his sights somewhere else entirely.

"The idea [to start a solar company] was conceived way back in 2007, right when I got out of college. But I knew I was lacking the know-how and that I'd need to build up a bit of financial backing."

Hauter instead found work at the San Diego offices of Lockheed Martin while studying via correspondence for his master's in network engineering through UC Santa Cruz. When Lockheed closed its local operation, he landed with government software startup Venator Solutions and began pursuing his dream of going solar.

"I took a course online, entry level [photovoltaic] installation. But then someone told me along the way that to get a license you need to have four years of experience — I don't remember who, I think maybe it was one of the students in the chat for that online class, that suggested I go volunteer with GRID Alternatives.

The group works to provide no-cost solar to low-income households — over 9000 systems have been installed statewide using a volunteer workforce that also receives job training that hopefully leads to employment in the booming green-energy field.

"With the new job, I committed myself to one or two days a week volunteering," Hauter says. "I’ll take Tuesday and Wednesday, maybe just Tuesday if we're busy at the office on projects like these, and then make up my missed work on the weekends.

"When I first started as a volunteer, they didn't have the classes where you could get paid as you're trained like they do now," he continues. GRID has since begun offering a 12-week paid training program that also includes a classroom component for industry newcomers. Workers that don't achieve mastery during the program are encouraged to come back for volunteer events to continue building their skills until they're ready for job placement.

With the skills he picked up through four-plus years of volunteering, Hauter recently received his C46 solar contractor's license and launched his own business, Elements Solar, in September. His workforce consists of a group of recently arrived Syrian refugees who've completed GRID training and attended English-language courses at Grossmont College in El Cajon.

"They're the ones who I think really need help right now," Hauter says of the region's refugee population. During the training program, he focused his volunteer work on serving as a classroom translator.

"We tried to create an environment where we emphasized English more, so they learned the terminology and the names of the tools and became better able to communicate with the crews because I wasn't there all week. It's amazing — after six to eight months they're speaking English fluently. It’s so satisfying."

While Elements has yet to land its first installation contract, Hauter is already employing a full-time office manager and two graduates of the GRID refugee class. He has another three who'll come to work as soon as there are jobs to do.

"To be honest, money-wise I'm okay doing what I already do — really, my wife and I are burning through personal funds keeping these guys employed until we have jobs for them to do," Hauter says. "I'm not necessarily out to beat up the many, many other solar installers already out there in San Diego, but if we want to meet our long-term clean-energy goals, the cost on the systems has to keep coming down; we have to make things as affordable as possible."

To that end, he's offered his services to several GRID applicants who don't meet income guidelines at his own cost. He's also continuing to volunteer — Hauter isn't working at the project where we meet, where a crew of former military veterans works to install an array of panels on the roof of a fellow servicemember in observance of Veterans Day, but he'll be back next week.

"We expected at first to take some time to get going. But to create these jobs and environmental benefits, in the end, will be worth so much."