The plumeria thief drives a Mercedes 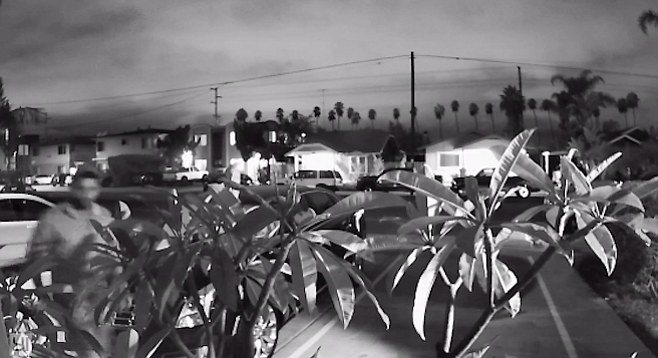 At around 11 p.m. on Monday, October 30, Tommy Sayles headed out to walk his dog in front of his apartment on Kansas Street in University Heights. He quickly stumbled upon a crime in progress. 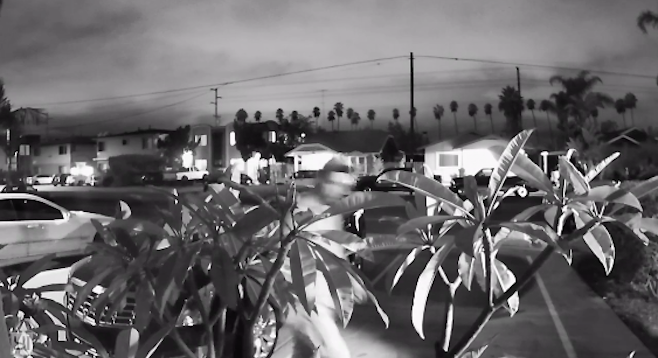 “I noticed a car backed into one of the parking stalls and their lights were on,” Sayles explained. “So, I looked over and [the thief] literally had one of my plants in his hand, and he was walking it around to his car. That’s when I confronted him and said, ‘Hey, what are you doing? Those are my plants,’ and that’s when he said, ‘Oh, man, hey, I’m so sorry. Can I buy this plant off you for 50 dollars?’”

Sayles reminded the thief that he was attempting to steal one of his plants and to “drop it.” The thief continued to offer $50 for the plant while he approached Sayles, which made him nervous. There was a passenger in the automobile as well.

Sayles didn’t push the issue further and let the thief drive away with one of the plants he had already loaded into his car. Sayles said the car was a late-model Mercedes with dealer plates. He notified the police, but the thieves have yet to be apprehended.

The target of the robbery was plumeria plants. The species is most often shrubs or small trees that are generally found in Central America, the Caribbean, Mexico, and Polynesia. They are regarded as eye-pleasing plants and are often targets of clipping besides theft: replanted clippings grow into full-size plants.

Sayles estimates that the plant the thief took was worth “at the very least $250.” He added that it would easily sell for more at a plumeria show.

“I bought some directly from Hawaii that were just cuttings and now they’re four and five feet tall. I’ve seen some much smaller at a nursery for eight or nine hundred dollars,” he said. “When you see a lot of plumerias that people grow here they typically have the white/yellow flower. I have some really exotic colors because we got them from Hawaii and other places. So, they’re actually even more valuable. I actually had one that — thank god he didn’t take — that we bought at a plumeria show that was a hybrid. It won an award. At the time when I bought it, it was $200. I would say now it’s valued in the area of $500 or $600.”

Sayles said he was going to buy a cable to lock all his plants together. He is well aware that he will still have to deal with the thieves attempting to get clippings, though.

Sayles noted that the police “use [surveillance] footage and compare footage.” They informed him that, “Sometimes these same people steal packages and other things.”

He also added that when he was filing the police report, the officer informed him that the “little bitty cuttings” are sold at the swap meet for ten dollars apiece.

“That would be my assumption as to what someone like this is doing with it because he certainly didn’t seem like the type that would actually care about the plant or know what to do with it,” Sayles said.

Yeah, it's sad but I learned this lesson years ago. Keep the yellow/white in your front yard and the rare colors in your back yard. If something is valuable people will steal it. My neighbor is now having to deal with people pulling up in their alley and stealing their avocados off of their tree.

The Reader has the best coverage of stolen plants. Just last June we saw this headline: "Succulent thief in North Park and University Heights". https://www.sandiegoreader.com/news/2... That thief drove a Prius (it's important to know if they drive a valuable car).

There have been other reports in the Reader too. In 1995 it was "ten exotic species of bamboo". In 2015 was mentioned "cycads stolen from the garden in 2001". Fortunately these insidious crimes are rare. Or maybe just rarely reported.