"We were supposed to have a meeting, but they locked up the tennis courts." 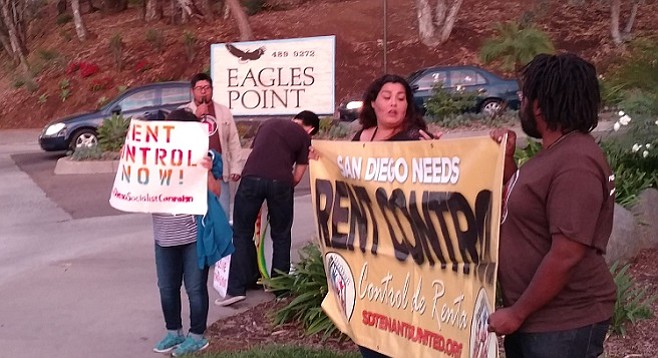 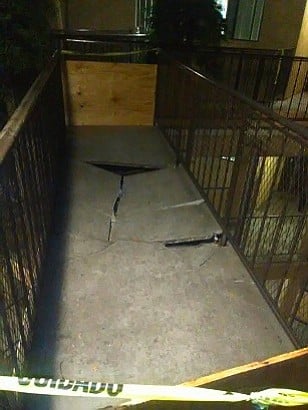 In July, the property was sold to a Los Angeles–based holding group as part of the dissolution of the late real estate billionaire Conrad Prebys's estate. The sale price was reported at just over $44 million, but the assessment for property taxes, which usually matches a new sales price, mysteriously jumped to just under $83 million.

Shortly after the sale, the property was hastily rebranded Solana at Grand Apartments — signs at entryways still carry the Eagles Point moniker, though banners with the new name hang near the office and clubhouse. A new management team was also brought in, which finally drove some current (and some now-former) tenants to speak up.

"Right now I'm paying $1455 for a two-bedroom, two-bath. But you renew, it's going to go up — they want, like, $300 more," said Maria, a seven-year tenant who asked that her full name not be used for fear of retribution. "The people here can't afford that much."

The rent spike was worse for Riley Gibson, an employee at Palomar College's LGBT resource center who shared a unit with three roommates until August.

"The buildings are falling apart," he continued. "We've had issues with roaches since day one — we called four times trying to get them treated. Our sink randomly broke: the garbage disposal stopped working and just flooded the sink with rotten food. It took them four and a half days to fix that one while we had no working sink.

"In one of the stairwells I had a kid try to sell me drugs; he was probably in his early teenage years. I've seen a lot of other drug deals going down in the back of the complex, too. Private security doesn't do anything. The cops are here, though, often several times a week."

When he got the notice of his rent hike, Gibson contacted Rafael Bautista of San Diego Tenants United, a group that's already fought on behalf of tenants with similar complaints in Linda Vista and is advocating for a form of rent control within San Diego's city limits that would cap rent increases at 2 percent annually.

"Once we got the [rent increase] notice, we were freaking out," Gibson said. "We didn't know what to do, how we were going to afford to move, where to go. So I asked around and someone suggested I talk to San Diego Tenants United — I reached out to Rafael and we met a few times, then started setting up a tenants' meeting here."

"We're here to support anyone who wants to make an effort to change things," explains Bautista, who assembled a handful of protesters to picket along busy eastbound Grand Avenue outside the complex on Wednesday evening (November 8). "We've been flyering the apartments, trying to get the tenants out to push for a meeting to discuss the situation both among themselves and with management, but intimidation has definitely been an issue,” Bautista claims.

"We were supposed to have a meeting, but they locked up the tennis courts," where it was supposed to take place, Maria explains. "Then they called the cops."

Gibson has since moved on from the complex; he and one of his old roommates now share a one-bedroom apartment in Vista secured on short notice with a loan from the roommate's grandparents for moving expenses and a deposit.

The situation hasn't improved for those who've stayed. Bautista, translating for a tenant who declines to be named, says that management has installed individual water meters and attempted to force all tenants — even those who had valid leases with water and trash included — to begin paying for water and trash disposal in addition to their rent. After an uproar, the landlord backed off and rescinded the notices — at least for the tenants whose lease terms they legally couldn't alter.

There are signs conditions are improving: a roofing crew was busy installing new composite shingles on one building, scaffolding surrounding some of the most dangerous outdoor walkways indicates repairs are underway, and the units that are being vacated are receiving long-needed (according to the tenants) upgrades.

The unanswered question is what will happen to the tenants forced out by rent hikes. With a vacancy rate of just 4.6 percent, housing stock in Escondido is in short supply, as is the case throughout most of the county. And given a median household income of just over $42,500 and average rents exceeding $1800 per month, housing costs exceed generally accepted guidelines (one-third of monthly income) by nearly $700 per month.

The higher rest go the louder the cry for rent control will be. Unless the owners of these apartments step up and clean the place up it will continue to be a slum and the owners slumlords. A $10 an hour full time job grosses $1730 a month. Many jobs in San Diego pay $12 - $15 which is not enough for one person to live on. The cost of home ownership is out of reach for the majority of those working by the hour and rents are going up. Rent control is inevitable.