Ordered the lamb, got the goat

Somali hospitality: "You must have it.” 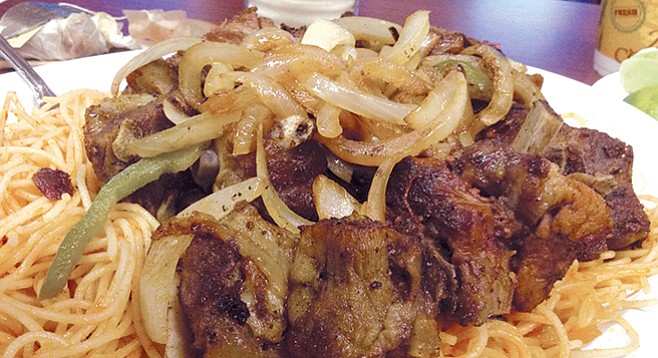 Feel like goat again. Last time I had some was at Mercado Hidalgo in TJ, where a couple of birria joints really deliver on the chivo stew. Before that, the cluster of Somali eateries around 50th on University. For a while, these were my goat-to places (heh-heh). Right now, they’re closest.

The first thing you hear as you jump off the #7 bus near Euclid is the voices of off-duty Somali taxi drivers outside their unofficial club, Coffee Time Daily, arguing like the end of the world is coming. I have had everything here from goat to camel meat (camel — mixed with beef — was gamey but great, like a combo of lamb and buffalo). But, no space tonight, so I head on to the next place I know, Fatuma.

Fatuma’s on the slope up toward the Tower Bar, right where Euclid crosses University. It’s a low, cream building with maroon-tile overhangs, right next to a dress shop called Mid-East Fashion. 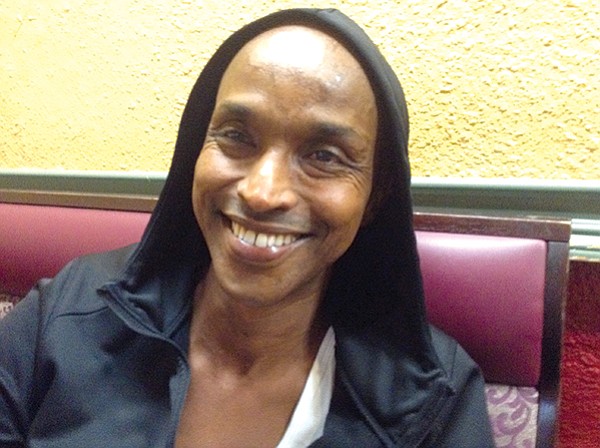 I walk into a room just about filled with men. One or two women are waiting for take-out, but that tradition of the guys gathering to talk after work is alive and well. The room has a yellow wall with a row of cream arches that divide the room in two. Aladdin-style lamps hang from each arch. Most of the men are sitting on maroon benches. 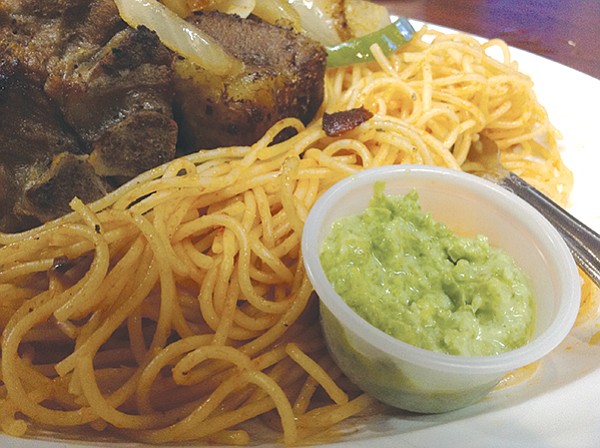 A hot sauce comes with the meat. It is called shigni, or basbaas.

Talk in Somali bounces around between them. I head to the counter behind a tall, slim Somali guy who’s picking up his meal. His plate’s loaded with meats, rice, spaghetti, salad. Hmm... That’s right. I remember how the Somalis pile it on for you. 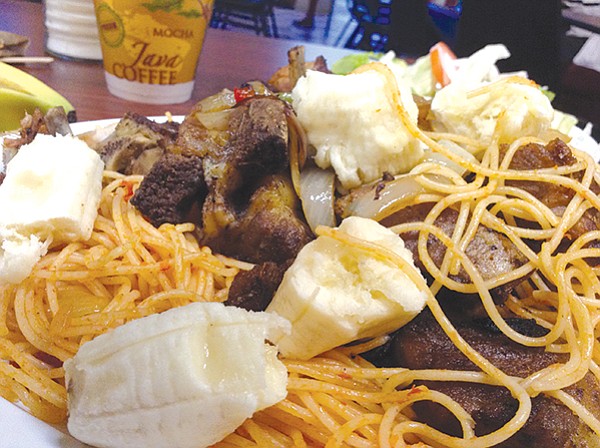 Moos (bananas). They have maybe 50 varieties to choose from.

But then I trip myself up. ’Cause there, at $12.99, is a lamb plate. Also with salad and rice or spaghetti.

That’s what I go for. At least that’s what I think I’m getting. I head over to a spare table, next to the guy ahead of me. He’s attacking his plate of lamb, tilapia, and goat, all fingers.

“Then you must have it,” he says. Name’s Ayala. He sticks a chunk on a fork and hands it to me. I take, chew, swoon. Because, oh man... It really could be the best goat I remember. Savory, crispy, juicy, super flavorful, and, hey, not gamey. “Please, another,” he says. I chomp down one more chunk.

Long and short is he must have said something to Hassan, one of the guys taking orders for the kitchen. Because when my plate comes out, it’s all wasla. Plus the fixin’s: salad, spaghetti, and dee-lish grilled onions, with green bell-pepper strips. Do I miss the lamb? Yeah, for one nano-second.

So, you have a choice: fingers of your right hand or fork. Fork’s less messy, but there ain’t nothing like the finger-squeeze technique of this hand-to-hand combat, man versus goat. Of course, we’re talking meat you have to haul out from bones. Bones are part of the deal.

A hot sauce comes with the meat. It is called shigni, or basbaas, and it’s light green and lethal. You just need a spot, not a splot, on a chunk of meat to get the kick you need. On the other hand, Somalis like sweet relief from heavy flavors. That’s why most times you’ll break up a banana and hide it among the spaghetti and meat and salad, so you get squishy surprises when you bite into them among all the savory tastes. And every time you take a slurp of your Somali tea ($1 per cup), you get floods of sweetness with echoes of ginger, cinnamon, and cardamom.

I find my tea sweet enough as it is, but Ayala piles the sugar in his. He says bananas are called moos in Somalia. Somali moos are often much sweeter than here, and they have maybe 50 varieties to choose from, compared to our one. This is when he launches into a conversation with other guys in the room. Conversation? Actually, it’s mostly him. He gets up, walks around, making points and long speeches, in Somali. He even shows them typed passages on his cell phone. He sits down.

“I was telling them we are all a gift from the mighty power of the Universe. You are the universe, and 99 percent of you is still out there. Only a tiny drop of your essence animates your life down here on Earth.”

Huh. What a thought. Then he turns back to eating his fish, goat, and lamb. And then he is saying goodbye, shaking hands all round, and disappearing.

Wow. I have to wonder if he’s a guru, a spiritual leader. Or if this is just the Somali way of conversation.

As for me, out of respect for Carla, I invest in a to-go kafta kebab plate ($9.99) with rice. Kafta is lamb. They’ve seasoned it and ground it. So, two hours later, I’m prying open her loaded polystyrene box. “No, no, no,” says Carla. “Mine.” She starts singing. “This lamb is my lamb, this lamb ain’t your lamb. You go back to your boney goat.”