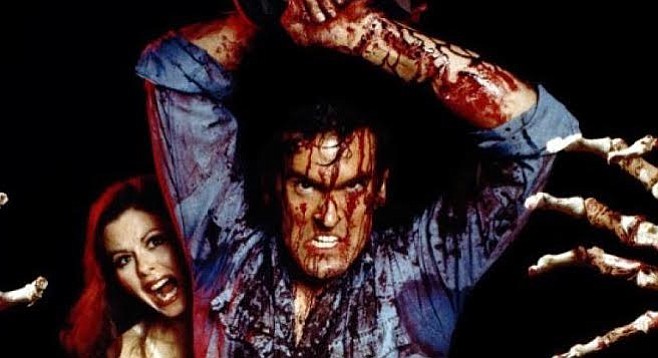 My wife and I saw Tenth Avenue Art Center’s Evil Dead: the Musical this year, because Halloween. We did not sit in the front row “splatter zone,” where spectators enjoy periodic soakings in fake blood and green goo. It turns out that The Thing to Do is wear all white, so one ends the night with a one-of-a-kind blood soaked souvenir outfit. You learn something new every day.

Anyways, at intermission, my wife turned to me and said, “Wow. This is bad, like, cheesy and bad,” which of course was absolutely correct. The play is so bad. It’s the kind of bad that you have to actively work at. It is a cultivated bad. The badness is subtle, like fine wine or expensive cheese. It’s the kind of badness that seems just kind-of-bad at first, and the you dig below the surface and find all the even badder badness that was waiting for you; like the endless stream of groan-inducing puns delivered by Possessed Cheryl during the play’s middle third, or the way Ash mugs for the stands and drops one-liners about Boomsticks and S-Mart to outsize rounds of applause.

I can confidently report that Evil Dead: the Musical was every bit as delightfully bad as the films upon which it is based.

Along that vein, are not the sensibilities of the B-Movie fan truly bizarre? I don’t think there’s a satisfactory reason why some horror/sci-fi flicks (and the satirical comedy farces based thereon) manage to click with ardent fans for the very reason of their self-effacing badness. Ordinary badness isn’t enough. Man of Steel and Transformer: the Last Knight are indescribably bad movies, but they could never ascend to cult-classic B-Movie greatness like The Evil Dead.

It probably has something to do with hipster irony. People enjoy stuff that is bad in just the right way, and they enjoy it enthusiastically, and unabashedly — even more than if it were good, which is the weirdest part. It’s as if it is somehow safer to like something because it’s bad than because it’s good. What a world we live in where being bad isn’t bad, but it’s not strictly good, either. That’s something to ponder till Halloween 2018.