Friends of SDSU vs. SoccerCity 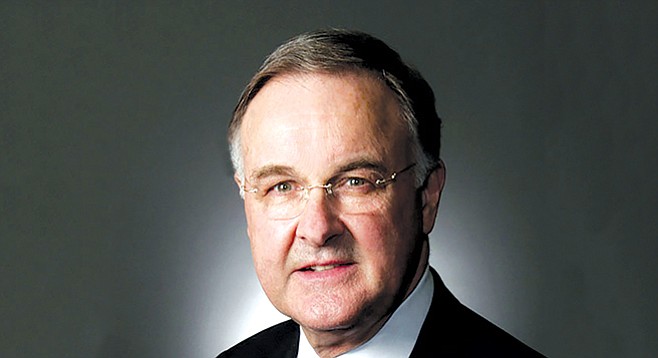 Friends of SDSU, a political committee set up to collect signatures for an initiative that would turn the city-owned site formerly known as Qualcomm Stadium over to San Diego State University, is preparing to do battle with SoccerCity, which is seeking to privatize the venue.

On October 24, ex–San Diego city manager Jack McGrory came up with $65,000 for the SDSU cause. Encinitas real estate broker Rick Reeder gave $5000, as did La Jolla Republican stalwart Leon Parma and ex–Jack in the Box mogul L. Robert Payne. Ed Blessing contributed $55,000, per an October 31 disclosure filing. The Texas oilman from Dallas is said to be good for much more as the stadium war has heated up with charges that city councilman Chris Cate leaked a confidential memo to SoccerCity lobbyists after they gave him campaign money.

Besides an SDSU bachelor’s degree, Blessing has a master’s of business administration from Harvard and is familiar with corruption-infested foreign oil patches, an experience that could serve him well in the dark corners of San Diego’s political world. In August 2005 Blessing told Bloomberg that he had never paid a bribe, then went on to say, “We forget sometimes that that’s an accepted way of doing business in some countries. I had a Russian businessman tell me that the difference between a good manager and a bad manager was that a good manager would ask for a facilitation payment, as he called it, and he would sprinkle it throughout his organization. A bad manager kept it all for himself.’’

Through September 30, Friends of SDSU had taken in $115,000 and had $66,821 cash in the bank, along with debts of $82,179. Outlays included $10,000 to signature-gatherer PCI Consultants of Carlsbad and $25,889 to San Diego’s Intesa Communications Group, a public relations firm that counts SDSU among its clients. American Directions Group, a Washington DC–based pollster, picked up $16,045. Another polling outfit, EMC Research of Columbus, Ohio, got $38,500, and local lobbyist Southwest Strategies was paid $12,500.

Wow, was McGrory bundling contributions as part of his $65,000 gift to Friends of SDSU? If it's all his dough, he must have something to gain from such generosity. (Re bribes, I heard today there is a current effort in Washington, D.C., to drop a pesky American regulation against our titans of industry engaging in "facilitation payments" when doing business abroad, as it works to disadvantage them with foreign competitors. How can you make American great again when the nanny state stands in the way?)