My goal is to encourage audiences to attend more esoteric screenings 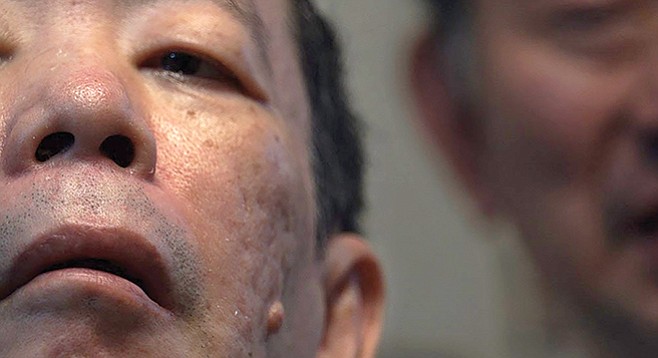 It’s time for the San Diego Asian Film Festival to once again take up residence at the UltraStar Mission Valley and the Digital Gym. (Festival #17 runs November 9-18, with the opening night at the San Diego Natural History Museum.) It’s normally been my habit to write up two or three films. But this year, I’m limiting myself to Caniba, a documentary that’s so irredeemably off-putting, monumentally tedious, and visually shorn of intricacy, the slam that follows is sure to put butts in seats.

When Renée Hartevelt snubbed the romantic advances of Issei Sagawa, the latter did what any good sociopathic college student would: he killed the young woman and snacked on her refrigerated remains. That’s just the beginning of the horrors on display in Lucien Castaing-Taylor and Véréna Paravel’s latest.

The majority of the backstory is confined to a single white-letters-on-black-background title card. The crime was committed in France in 1981. Issei was briefly institutionalized, but the court upheld his acquittal by reasons of insanity. This allowed him to move back to Japan, where he currently lives with his outstandingly dysfunctional brother, Yun, free to roam the streets of suburban Tokyo.

Such a loyal brother is he, one expects Yun’s freezer to still be stocked with frozen body parts to keep Issei happy. Yun regrets that Issei didn’t consult with him before the fetishistic desires that led to the killing became fact. The older bro reasoned that there are women out there who would gladly part with a pound of flesh in exchange for a few bucks (coupled with an iron-clad guarantee that would allow them to walk away with their lives).

Virtually unemployable — he should have looked into an official greeter position at the Tokyo WalMart — Issei makes a living by exploiting the notoriety of his crime. That includes a starring role in a pornographic film and a personally hand-drawn comic-book rendering of the murder and subsequent events that led to his arrest. Yun compliments his brother’s writing skills before the stomach-turning subject matter forces him to flee the room.

Caniba comes to us from a group of experimental filmmakers operating under the designation the Harvard Sensory Ethnography Lab. This is the first one of their films to cross my path, and the stench of state-of-the-art pretentious fanboys burns deep in my nostrils.

Where I come from, they call experimental films Citizen Kane, or Rope, or Eraserhead, not indecipherable closeups that reduce frames to smeared Rorschach tests. Judging by their work as cinematographers, these boys have a career ahead of them as ear, nose, and throat specialists. Their idea of going inside the head of a cannibal means placing the camera three inches from his face before hitting the record button.

Ritualistic acts of Issei punishing his body with knives and barbed wire (“I want my blood to drip”) are almost too much to endure. This is extreme cinema’s answer to Andy Kaufman “entertaining” a paying crowd with every chorus of “100 Bottles of Beer on the Wall.” After 15 minutes, I began longing for the relief a medium shot would bring. The closest we get is a few minutes of home movies.

As much as I applaud Issei’s self-professed love of Disney and Renoir — the painter, not his kid — I don’t get the fascination found in celebrating human slaughterers any more than I do seeing it presented in a manner slightly more visually compelling than a colonoscopy. I worked at a pop-culture collectibles store in the early ’90s and had a chance to buy an original clown painting by Chicago’s very own serial killer, John Wayne Gacy. The seller was asking $75 for it. It’s bad luck to bring such an object into one’s home. Besides, who wants to spend each day looking at a symbol of evil nailed to their living-room wall?

As their fuzzy faces float in and out of light, the brothers speak of the victim as though she were a willing sacrifice. Is it too much to ask to pull the camera back so that we may view these slobs in context to their surroundings? Nope! The gimmick stands. You’ll stumble into the lobby when it’s over feeling like a drunk regaining consciousness after a three-day bender.

My goal is to encourage audiences to attend more esoteric screenings, not shun them. As such, it’s never been my style to slam film-festival offerings. What’s the point? In this case, I heartily encourage the curiosity-seekers among you, particularly those drawn to the morbid subject matter, to see the film when it screens at 9:45 p.m. on Saturday, November 11, at UltraStar. After all, why should I be the only one to suffer?