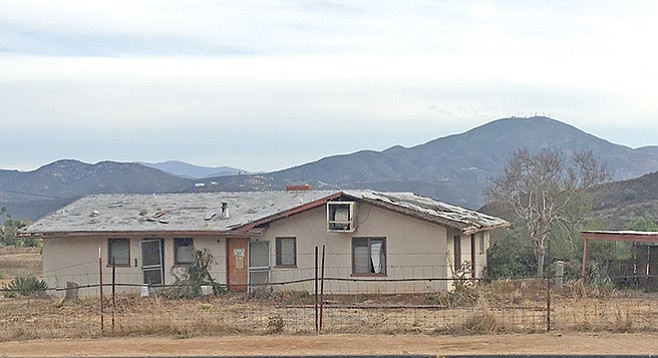 The House Where Nobody Lives sits out on Fuerte Drive in El Cajon. Kids sometimes visit at night to scare themselves: “Don’t come back” has been scratched into the black-and-white poster of a shirtless and twisting Mikhail Baryshnikov that lies outside the back door. (The photo is taken from Roland Petit’s Le Jeune Homme et Mort — the young man and death.) Inside, an empty wheelchair stands amid the mounds of detritus, some of it recent, some of it much less so. Nobody is sleeping on the dirty bed set up in the back room, but that’s just right now.

From the broken picture windows in the long living room you can see the red lights of the radio towers atop San Miguel Mountain some five miles away. What’s striking is that there are no lights in between. That’s partly because of parkland and topography, but it’s also because you’re on acres of empty land surrounded by Horizon Hills showpieces. (The five-bedroom, four-bathroom, 3000-square-foot house across the street sold for $785K in 2015 and boasts just half an acre.) What prevented the march of progress (read: development)?

Perhaps spite? There’s an office of sorts downstairs: a desk and a wall of shelves. One shelf holds letters, some of them personal. This from Maxine in San Francisco, written in May of 1940: “Isn’t the War situation horrible? Someone surely will have to stop Hitler sometime soon or we will all be doomed.” Hitler was stopped, but 40 years later, a “Gestapo-type ordinance” developed by the San Diego County Board of Supervisors led chicken farmer Carlin Hooper to shut down his operation and put his property on the market — for $10 million. In 1985.

The term was Hooper’s, but it was picked up by county supervisor Paul Eckert, who delayed consideration of the ordinance by saying, “We are going to have a Gestapo to go out and harass these people.” The story is told in clippings, cut out from the San Diego Union and the Daily Californian, taped to sheets of legal paper, and then left to molder on the desk.

The problem was flies, swarms of them, supposedly breeding in chicken manure and invading Fuerte Elementary next door. The school went up in 1959; by that time, Hooper’s family had been in business for decades. (A copy of the San Diego Poultry Journal from 1940 lies on the office floor.) Beside the newspaper articles is a photocopied page from the California Civil Code on Nuisance: “3482.5 Preexisting Agricultural Uses Not a Nuisance. a) No agricultural activity, operation, or facility…conducted or maintained for commercial purposes, and in a manner consistent with proper and accepted customs…shall be or become a nuisance...due to any changed condition in or about the locality after the same has been in operation for more than three years.”

The county took Hooper to court again and again on nuisance charges, but they never convicted him. But convictions aren’t everything: the prospect of more frequent inspections and fines up to $500 a day was enough to make him vacate the premises.