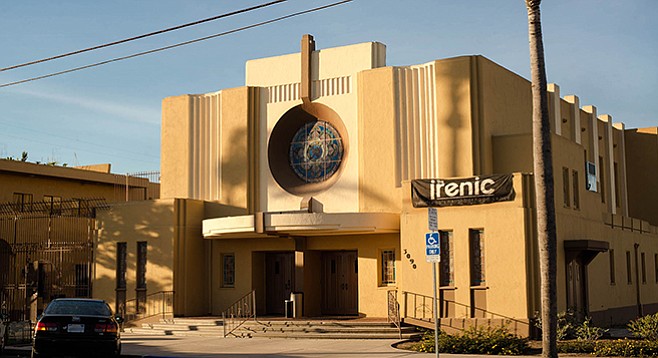 The Irenic, the 70-year-old North Park church building that for the past six years doubled as a 450-capacity music venue, seemed to be the perfect place for headliners who wanted an all-ages venue but were too big for UCSD’s Che Café and who didn’t want to play Soma.

Heavy-hitting locals such as Little Hurricane, the Hot Snakes, Mrs. Magician, and Drive Like Jehu would play for kids who couldn’t get into bars. And Irenic shows sold out with touring headliners such as Youth Lagoon, Ed Ghost Tucker, Tune-Yards, the Faint, the Sonics, and Motor City Devils.

But the curtain is coming down on the Irenic as a rock venue.

“They aren’t taking bookings after December,” says an insider who declined to be identified. “They don’t want live music anymore. I guess they want to rent it out for weddings.”

The insider reckons (but does not know for sure) that the Mission Gathering Church, which owns the building and uses it for church purposes on Sundays, found that it was making a lot less money on its rock-show rentals after it stopped serving alcohol.

“The city put a kibosh on that about a year ago,” says the insider. The outside promoters who rented the Irenic (Tim Mays/Casbah, Cory Stier/Soda Bar) did not share in the profits from alcohol but benefited from increased ticket sales.

A receptionist for the Mission Gathering Church said all questions about the Irenic needed to be answered by facility manager Kyle McMillan, who did not return a request for comment.

Can a church serve alcohol at their wedding receptions in the church hall? You know, a glass of wine with the meal, a champagne toast? Is the Mission Gathering Church exempt from the laws that governed the concerts? Just wondering. Some do, you know.

Sam Trego, who identified himself as the Chairman of the Board for the Irenic wrote an email to say that the "rumors in your article were not entirely correct." I found his number and called him to ask him what he was talking about. As it turns out, he admitted that the major point of the story was true, that outside promoters like The Casbah and Soda Bar in fact had no bookings in the Irenic in the coming year, ending a six year policy. He said that there were concerts through December (which was what the article said). A second email indicated he did not like the headline "Goodbye Irenic." He said it made it appear as if the Irenic was closing down for good. (Which it does not....only that live music events by headliners like the ones mentioned in the article were not coming back). I asked Trego why his general manager Kyle McMillan who was hired to run the Irenic's business affairs did not return a call to answer questions about the Irenic's future. Trego said he didn't know. In his second email to me he that indicated his beef was with the headline, "Goodbye Irenic." He said he had said all he wanted to say with these two emails and that we are done communicating. If I could talk to him more I would ask him since when does a church have a Chairman of the Board? Also, I would like to know if his company, San Diego-based Imagine Entertainment, ("Which offers an outrageous mix of comedy and drama for the theatrically inclined") would be producing shows in the Irenic in the coming year.

seriously? what church has a chairman of the board? every church has or should have a board. duh. who cares about Mr Trego's business... it is actually none of your business and perhaps Kyle didn't call you back because again... it's none of your business. Irenic is most likely not shutting down and is only on hiatus... you people always make assumptions about things... this article actually should have never been written and the unnamed source usually means their full of shit.

Is Mission Gathering Church a non-profit Religious institution? Don't get it. Who owns the building?