General Atomics may use old ones for target practice 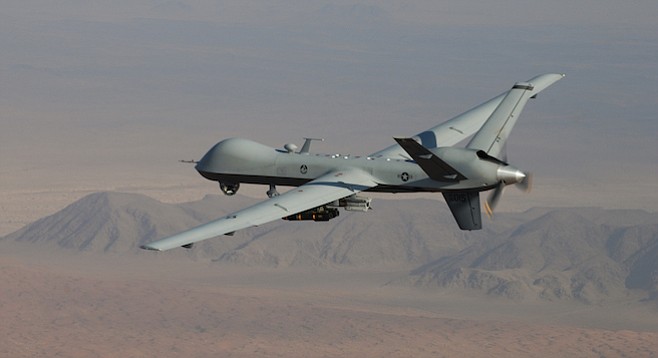 The U.S. military's fleet of Predator and Reaper drones, produced locally by San Diego's General Atomics, is preparing to enter their third decade of service. According to a new report, they're also due for some serious upgrades.

Earlier generations of the long-controversial unmanned aerial vehicles (as the industry prefers they be called) have been flying surveillance missions since 1999. Sending drones on bombing missions has since become commonplace, and General Atomics now supplies the machines to Italy, Australia, France, the United Kingdom, the Netherlands, and Spain. Despite objections from Pakistan, they may soon land in India.

Deploying the craft within range of a target has been a rather cumbersome undertaking, requiring the transport of 10 tons of material and as many as seven crew members on the ground (the pilots themselves are generally based in the American Southwest). With the next-generation MQ-9 Reaper (despite names like Predator and Reaper, General Atomics has sought to publicly downplay their use as machines of war), many of the "boots on the ground" jobs may be rendered obsolete.

With the new Predator, a laptop-based pre-flight check can be completed by a single crewmember on site, who then hands the aircraft off to a remote pilot who, according to National Defense Magazine, "taxis the aircraft down the runway, then hits a 'take-off' button, which allows the aircraft to lift off on its own." Versions used by the Army and Customs and Border Patrol have long had automated takeoff and landing capabilities, but for some reason the Air Force has lagged behind.

Much of the mission can be conducted through automation, allowing a single pilot to handle multiple craft "through a simple interface and a controller that looks like a video game joystick."

The aircraft could even be capable of conducting targeting and bombing missions without human interference, though 432nd Expeditionary Wing commander Col. Julian Cheater says he's "not a fan" of that much automation.

Says General Atomics senior director of automation Darren Moe, "It is not a video game, but we definitely took a lot of cues from the video-gaming industry, where they spent billions of dollars designing these interfaces for kids and teenagers to control multiple aircraft and entities to go to war with each other."

As for the old drones being cycled out of service? General Atomics says they won't be sold as surplus for foreign militaries and aren't airworthy enough to function over American soil, so their fate may entail "going out in blazes of glory as Navy target drones."