Donuts versus salad — vice and virtue — guess who wins 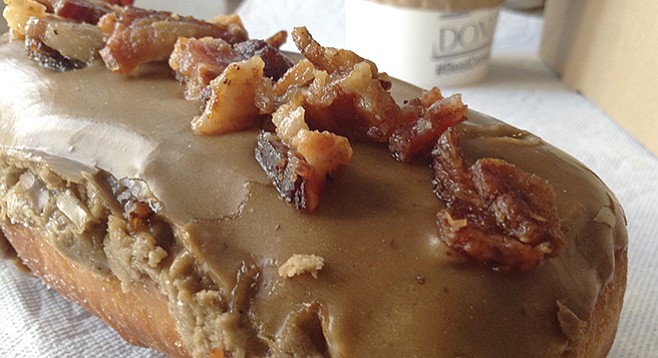 I can’t help thinking of Oscar. Because in the heat of this Santa Ana morning, the street is rampant with, I guess, optimists and pessimists, crowding around the entrance to this four-year-old phenom, the Donut Bar. Me, too. Looking for breakfast. 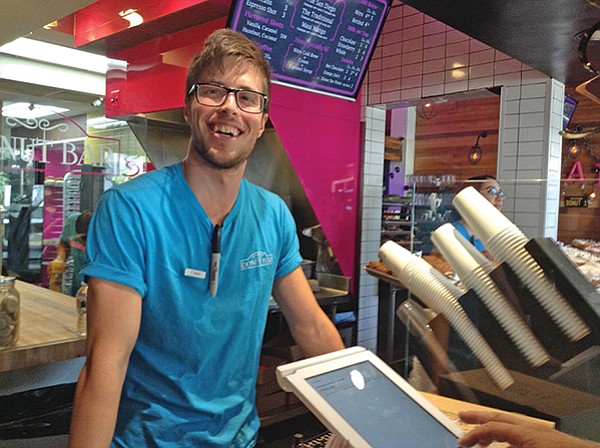 Crash — his real name, he swears — is as upbeat as the rest of the crew.

I have a soft spot for Donut Bar’s block, especially where Sixth and B meet. For starters, you’ve got Stout, one of the friendliest pubs downtown. (And the best-poured Guinness, too.) Then, between the office towers and the sandwich shops, you have interesting set-ups, like in the ancient Southern Hotel’s basement, Penny Farthings Bicycle Store or, nearby, a catering kitchen you can rent, and the Rehearsal Room Acting School. 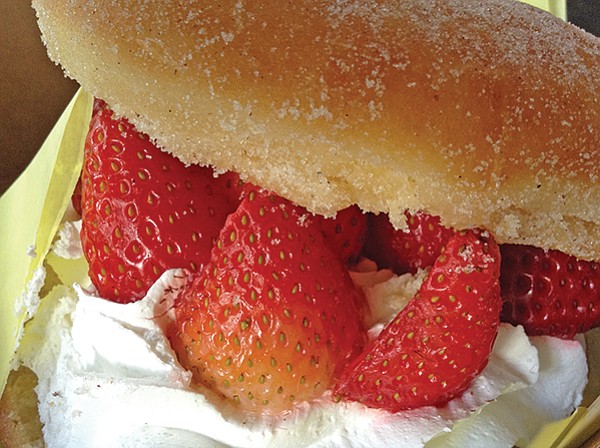 So, my first thought had been: see what’s happened to La Gran Tapa, the town’s original tapa bar. Heard it was a salad bar now. And, oh yes. It is. Salad Style, all fresh and green and white. And it’s definitely a possible. Not exactly breakfast, but for $9 or $10 you can get “small” but protein-laden salads like peppered grilled steak (with blue cheese, oven-dried tomatoes, mushrooms, hearts of palm, all sorts of live, good-for-you mixes). Or they have chicken meatball salad or chili shrimp soba noodle, or Moroccan couscous with feta, asparagus, and black currants. 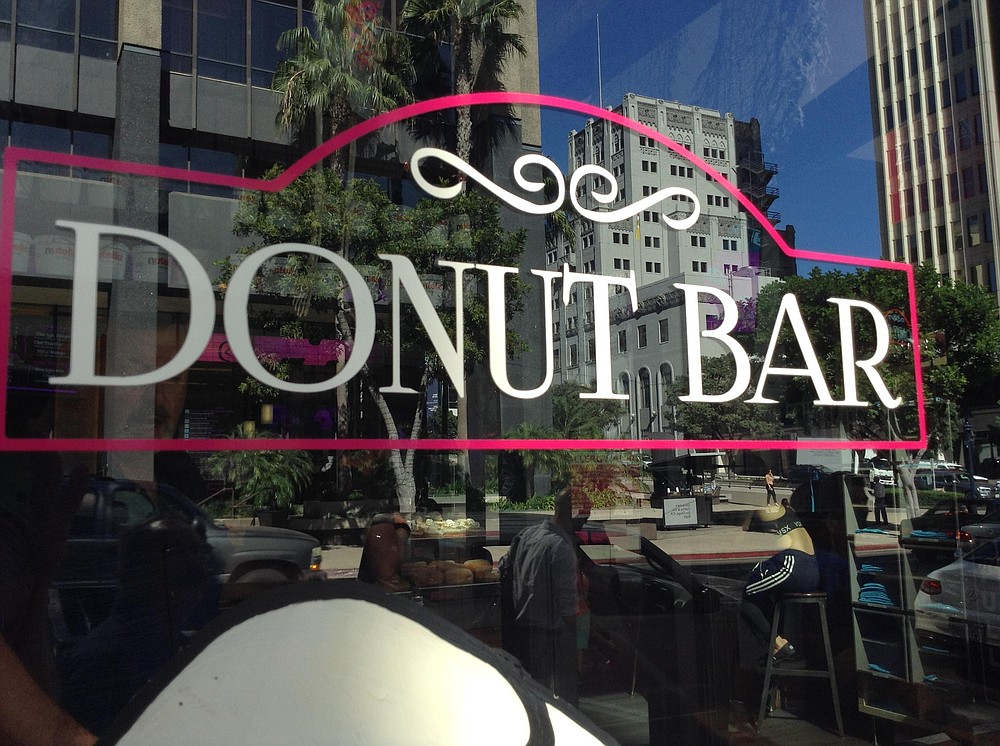 I’d almost decided this was what I needed when I noticed the buzz coming from next door. Place was bulging with people acting like kids on a break from a heavy history exam.

“Open from 7 a.m. till we run out,” says Donut Bar’s way-confident sign. 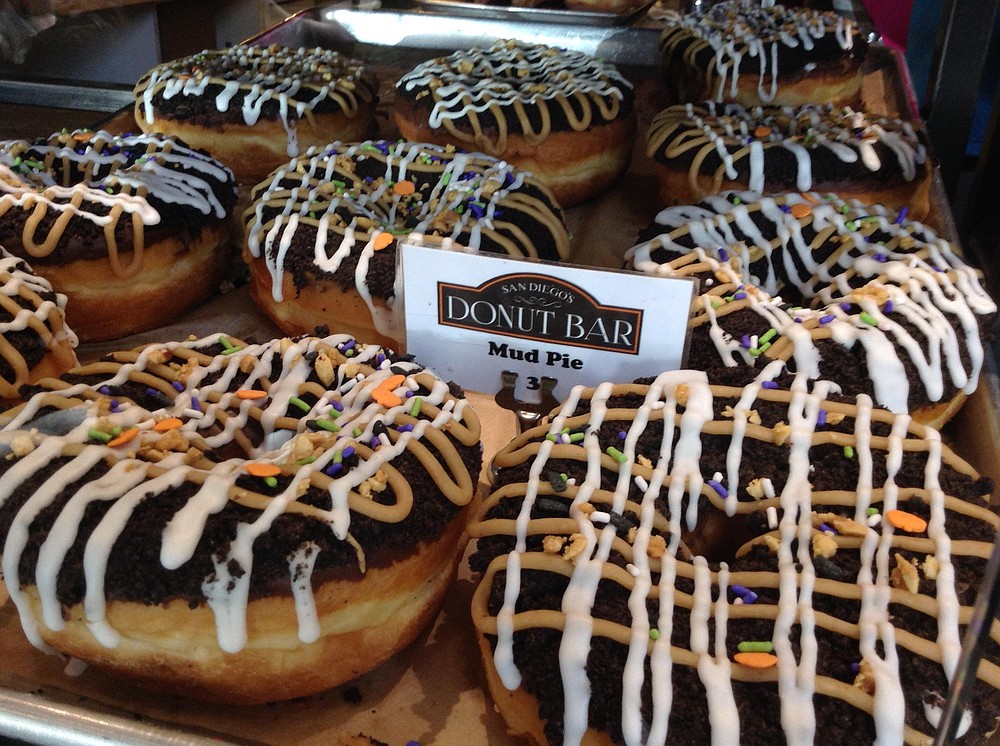 This is when it hits: I discovered these guys back when they first opened. Chef Santiago Campa and Wendy Bartels. He’d been a pastry chef at classy places like Four Seasons and Ritz Carlton. Had this idea of doing not just donuts but going the way of San Diego beer: artisan donuts, small batches, original flavor combos he’d just make up on a whim. 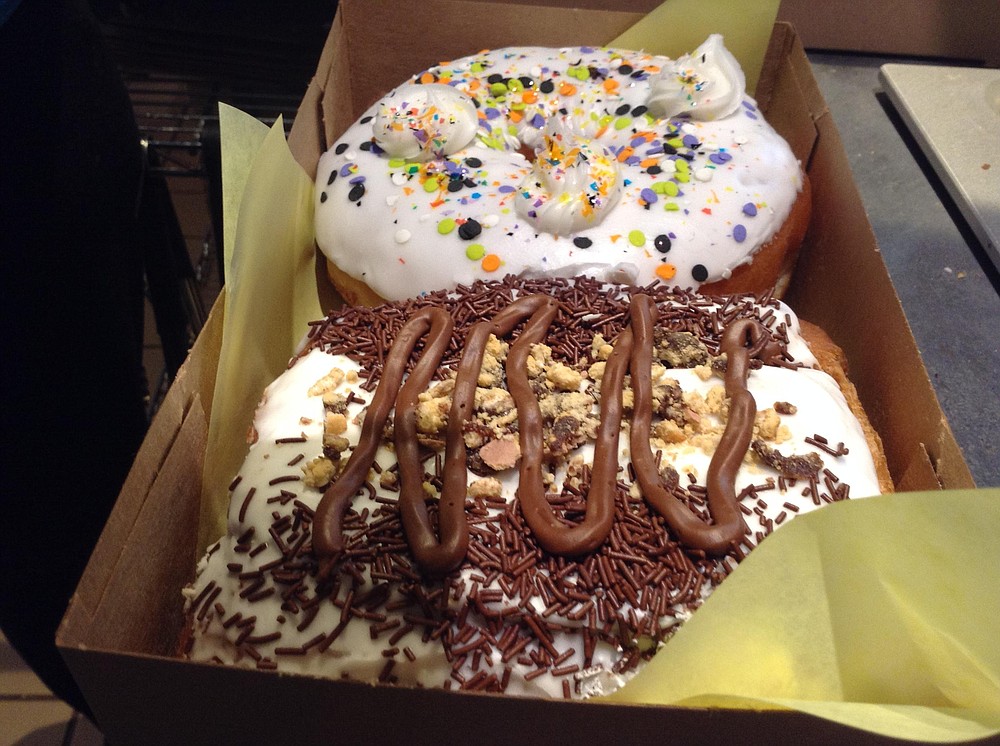 Brilliant idea. Because donuts needed someone to hit the refresh button after 100-plus years. National Donut Day, first Friday in June, honors the Salvation Army ladies who went over to France and served donuts to the “doughboys” of WWI. Donuts haven’t changed much since.

Till now. I mean, I’m standing outside, looking up at today’s menu. (A daily menu for donuts?) Things such as french-toast donut, pumpkin-pie donut, butter beer, maple bacon. And for vegans, donuts such as apple fritter, crème brûlée, and banana caramel.

So, which place for breakfast? For a moment I’m rooted to the sidewalk, torn between virtue and vice, salad and sugar, oughta and wanna.

No contest. Two shakes of a lamb’s tail and we’re in like Flynn, under a huge arch of red rolling pins and mingling with the excited crowd in Donut Central, ogling the rows of donuts.

“This is nothing,” says one of the gals behind the display counter. “You should see the lines we get early in the day. They go clear to Sixth Avenue.”

“Breakfast donuts?” she says. “Absolutely. How about the bacon-topped maple?”

“I’ve been thinking about that one,” says the guy next to me. “But I’m from Canada. Kinda mapled out.”

Not me. The whole bacon idea has got me going. ’Course, I have to wait in line just to get to see what’s in the display. But I order the maple-bacon ($4). Second course ain’t so easy. I look across the fields of doughnut circles, and...donut squares.

They do look scrumbo, but my eyes always go for technicolor and, boy, the rack of Strawberry Split donuts calls out to me in scarlet and white and gold. Strawberries, whipped cream, and donuts split to look like burger buns. (Strawburgers, anyone?)

First off, the bacon ’n’ maple. Oh, yeah. Ohhh, yeah. Salty bacon gives perfect umami to maple. It’s a long bun, really. Don’t know if you can call it a donut. Except these guys do, and baker knows best. The strawberry split is huge, and it does go grrrreat with the cup of joe. I was starving when I came in, but these two donuts are way too much breakfast for this doughboy.

A couple orders donuts, then starts asking for…beer? He gets a Ballast Point pumpkin ale. She orders a Lagaria Pinot Grigio Delle Venezie wine (seven bucks each, I think).

“Yes,” says Crash. “Craft donuts, craft beer. It’s pretty popular. We’re also open from 5 to 10 p.m. Fridays and Saturdays. Bar’s the center of the scene. We make donut batches, then and there. People seem to like the combination.”

Now I notice the whole new bar area with 24 taps (two are for chocolate and strawberry milk) in what was their neighbor’s business, Robek’s Juice store. I see one tap is New English Imperial Stout. That’d make a pretty good donut-drink combo. Also, I can see wine and, say, my Strawberry Split donut getting along.

So, kudos to Chef Santiago. And now I hear he’s gearing up to franchise his craft-donut idea all over the world.

Oh. This just in. From Carla: how about one right next to our place?

Nearest Bus Stops: For #3, #120 northbound, Fifth and B; southbound, Fourth and Ash; others at Fifth and Broadway