Hand to God will make you squirm 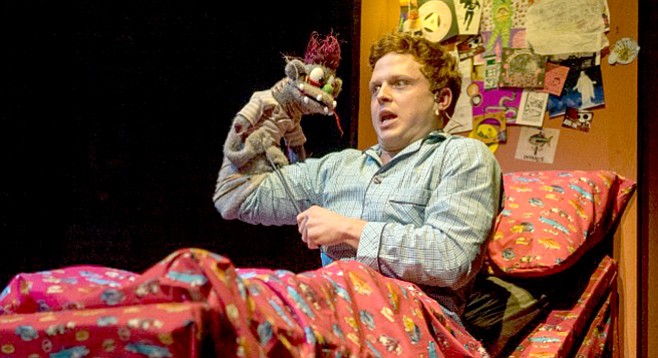 In this era of manic video games and computer graphics, everything is all in. Used to be, when someone fell in a movie, they’d clear the window, or whatever, free-fall for a spell, and you’d hear a thump, but wouldn’t see the crash landing. Now everything is cause and effect. You see the fall, usually in slo-mo, and the collision, followed by vigorous splatter. There’s no holding back for the imagination, or decorum, to temper the effect.

Robert Askins’s Hand to God, currently the most-produced play in the U.S., is a theatrical case in point.

The two-act “dark” comedy has a relentless urge to go graphic whenever possible. Taste? Nuance? — pshaw! Too last century. Hand is brash, gleefully offensive, and determined to jiggle your squirm factor. Now at the San Diego Rep, it’s blazingly funny.

Back when, young Timothy would be the reigning villain in just about any play. A bully’s bully who F-bombs at will, he has a near demonic urge to fracture attempts at order. Decades on Mr. Freud’s couch couldn’t put a dent in Timothy’s psyche, though his simian propensities might do grave harm to the now-absent father of psychoanalysis.

Somehow, Timothy finds himself in the brick-walled basement of a Lutheran church in Cypress, Texas. It is 1997. He’s supposedly learning to make Christian hand-puppets, but he’d much rather torment Jason, the teacher’s squeaky-nice son and get his sweaty mitts on her.

Margery volunteered to teach Christian puppetry for something constructive to do (actually to hold her crumbling world together). Six months ago her husband died of a heart attack — he over-ate, rumors insist, because she drove him nuts. Now she’s so lost she’s even alienated from her former, alienated self.

Not only that, soft-spoken Pastor Greg wants a full-dress puppet show next Sunday, even though few are ready for prime time. And, along with class cut-up Timothy, the good pastor has eyes — and semi-repressed hots — for Margery.

So far, this is the stuff of plays and movies. But Hand opens with Tyrone, a gray sock-puppet with a shock of rusty red hair. He gives a sermon on the origin of good and evil. In the beginning, he says, everyone was free: “we rutted as we chose careless in the night.” Then the “evil bastard” who learned to hunt for larger game devised rules against doing “bad things.” Needing a scapegoat for such deeds, someone invented the devil.

Tyrone, waving his arms wide and flapping a large, red-tongued yap, could be a devil, or even The One. He lays siege to Jason’s right hand and terrorizes the basement, taking particular delight in reducing Timothy to tears. At first, it’s not clear if Tyrone comes from Jason’s mind or is an actual denizen of darkness. He has powers, and during the play he grows in scope, if not in size, like Seymour II in Little Shop of Horrors. He pushes the play far beyond the comfy restraints of live theater.

It’s a coup d’evil. Under Tyrone’s sway, people develop extreme cases of Tourette syndrome. They open fire, as if back in the days before right and wrong, regardless of the target or weapon of choice. Hopes, fears, and long-held secrets burst out in a Pandora’s Box of brutal revelations.

The melee complicates the title. “Hand to God” is an expression of truth — like “honest to God” or “cross my heart and hope to die.” But the play sets up contrasting truths: a traditional, good/evil ethic, and the inner truth of a character’s emotions, wants, and needs. Depending on which hand Jason holds up, the behavior is either a “bad thing” or an honest, open account of where they are right now.

Hand often gives both. There are several seductions, for example. In one, Pastor Greg (Jason Heil, right on target) fumbles with whitebread feelings for Margery; in another, Timothy (Garrett Marshall, budding recidivist) and Margery do a wall-to-wall S&M seduction as if auditioning for Wrestlemania. But neither attempt, so to speak, thumps the sack. Then Tyrone woos young Jessica’s (Christina L. Flynn, crack timing) puppet Jolene. They finish what the others started, in graphic detail.

The play is so blatant, and so farcical, in the wrong hands it could drift off during intermission like a balloon (it may send some home before). Director Sam Woodhouse gives the piece ballast by keeping the characters real. DeAnna Driscoll’s Margery may evoke laughs, but she doesn’t mean to. Driscoll gives her genuine pain. She’s so lost she finds no consolation from any alternative, be it traditional or taboo.

Caleb Foote plays innocent Jason and vile Tyrone, aka. Dr. Jekyll and Mr. Satan. Think of it: he’s starkly contrasted characters, does rapid, back-and-forth dialogue, and manipulates a hand-puppet flawlessly. That’s a theatrical triathlon! But after the initial impression, Foote’s so expert that one forgets the technique and watches a struggle for the souls of the world.