Coming to a venue near you 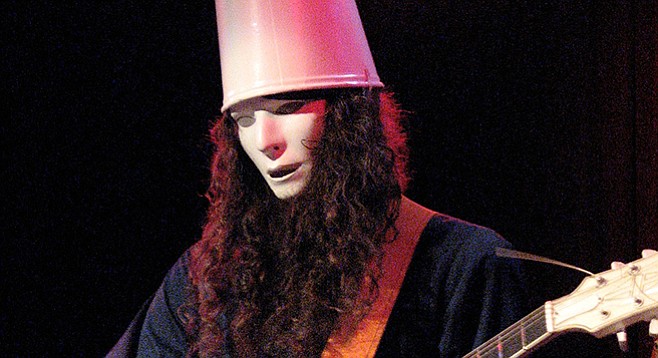 The first time you heard about the guy who plays guitar while wearing a Michael Meyers mask and an empty KFC bucket on his head, you probably thought someone was either pulling your leg or describing the time they dropped acid while watching a Fat Albert & the Cosby Kids Halloween special. But Brian Patrick Carroll has proven to be the real deal, something many had already figured out over the course of a half dozen or so solo albums recorded before spending 2000 through 2004 with Axl Rose’s Guns ’N’ Roses. That high-profile gig found him playing on the legendarily delayed Chinese Democracy album as well as doing part of the subsequent support tour and appearing with GNR at Rock in Rio 3 and the MTV Video Music Awards. Throughout his four years with Axl Rose’s rented troupe, Buckethead released studio albums under his pseudonym and recorded with his bands the Corn Bugs and Cobra Strike; he also worked on collaborative projects with Thanatopsis, Les Claypool, and Japanese producer Shin Terai. Now 48, Buckethead has released an insane amount of albums, sometimes dozens per year, lately including vinyl reissues of early material and a brand-new Halloween LP available only on wax. He’s touring with a live band that includes Godflesh bassist Dan Monti and Serj Tankian drummer Bryan Mantia, with his first concert album, Live from Bucketheadland, set to drop early next year, not long after he plays the Music Box on December 15. 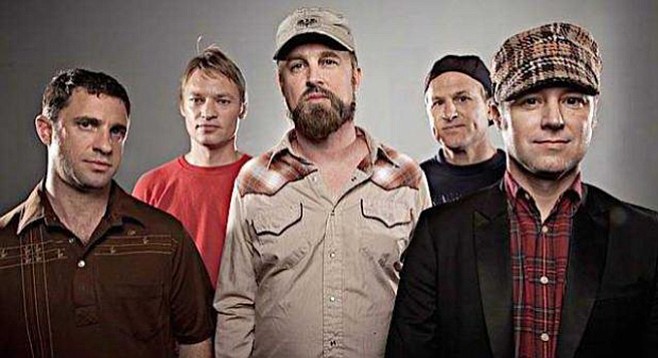 It’s hard not to love Sacramento alt-rockers Cake, with their funny and sarcastic lyrics and deadpan vocal delivery that often comes across like comedian Steven Wright fronting the Pixies. Founded in 1991, their fan base is ever growing, thanks to smarmy evergreens from throughout their cultish career, from the 1995 breakthrough hit “Rock ‘N’ Roll Lifestyle” through 1996’s “The Distance,” the 2001 top-ten single “Short Skirt/Long Jacket,” and probably their best known track, “Sick of You,” from their first LP to debut at number one on the Billboard 200 Albums chart, Showroom of Compassion (2011). The lineup taking the stage at Observatory North Park on December 16 features founding duo John McCrea and Vince DiFiore, with longtime bassist-singer Gabe Nelson (a member since 1992, other than a ’94–’96 estrangement), guitarist Xan McCurdy (who joined in 1997), and newest drummer (since 2004) Paulo Baldi. The show is open to all ages. 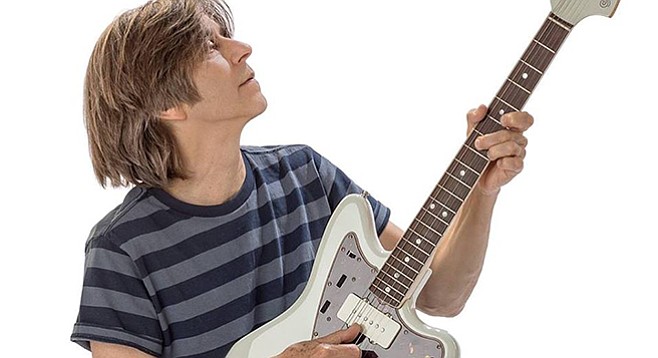 Until 1990, guitarist Eric Johnson was the kind of player whose name was often mentioned among musicians who considered his 1986 major-label debut, Tones, as important a touchstone as anything by likeminded stringsmiths such as Pat Metheny and Larry Carlton, even though Johnson rarely got that kind of radio play. All that changed with 1990’s Ah Via Musicom, when he became the first person to score three Billboard top-ten instrumental singles from one album: “Trademark” (#7), “Righteous” (#8), and “Cliffs of Dover” (#5), the latter earning him a Grammy for Best Rock Instrumental and a #17 rank among Guitar World’s 100 Greatest Guitar Solos. Johnson will perform Ah Via Musicom in its entirety at House of Blues on January 27, backed by the album’s original rhythm section of drummer Tommy Taylor and bassist Kyle Brock. A second set will likely feature tracks from his newest full-length, Collage, which includes five new songs and five covers, any one of which may turn up on his set list, such as Jimi Hendrix’s “One Rainy Wish” and Stevie Wonder’s “Uptight (Everything’s Alright).” Also on the bill is New Jersey–born, California-raised, and Hawaii-based acoustic singer-songwriter Arielle, whose cheerleaders and collaborators include Extreme’s Nuno Bettencourt (who helped get her signed to Red Decibel, label home to Kelly Clarkson and Demi Lovato), as well as guitarists Steve Vai and Uli Jon Roth. 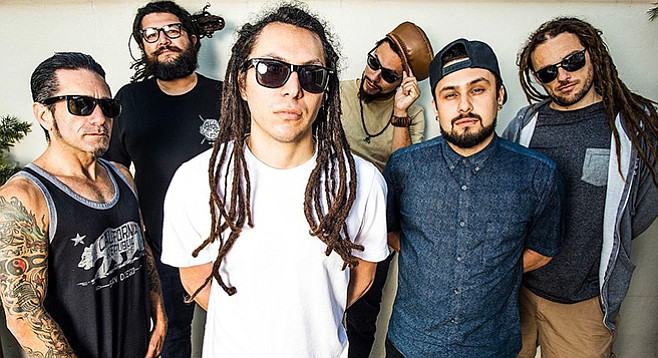 The Boomshaka Music Festival takes place at Valley View Casino Center on February 19, with featured reggae-rock acts to include Tribal Seeds, Stick Figure, Hirie, the Original Wailers, Don Carlos, the Expanders, Aloha Radio, and Tribe of Kings with DJ Carlos Culture, all starting at 3 p.m. Tribal Seeds, based in Chula Vista and fronted by brothers Steven and Tony-Ray Jacobo, is recording a new album, with their most recent single, “Rude Girl,” released in April. Stick Figure has brought San Diego to the top of the Billboard album charts on the strength of LPs such as 2012’s Burial Ground and 2016’s Set in Stone, with a new single just released called “Above the Storm.” Local female-fronted Hirie saw their sophomore album Wandering Soul debut at number one on the iTunes reggae chart last year, and Tribe of Kings is a local DJ collective celebrating 20 years of hosting island-themed events at area venues. 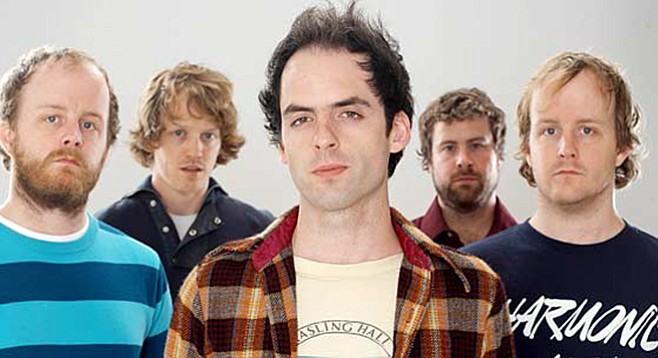 Just over a year since their last appearance at the Casbah, Philly-Brooklyn indie rockers Clap Your Hands Say Yeah returns on February 20, but not to plug their album from earlier this year, The Tourist. Instead, they’re celebrating the tenth anniversary of their only full-length to crack Billboard’s U.S. Top 100 (#47), Some Loud Thunder, by playing the entire album on tour for the first time. Founded in 2004 when members met at Connecticut College, the band’s only genuine hit LP reached #2 on the U.S. Indie chart, but their followup in 2011, Hysterical, was their only subsequent release to chart at all in the U.S. (#122 at Billboard, though it reached #20 on the U.S. Indie chart). 2012 saw three band members quitting, and most people don’t even seem to know the remaining duo released an EP in 2013, Little Moments, or a 2014 full-length called Only Run, after which a fourth member quit. Those who did brave a spin frequently came away disappointed to hear guitars cut back in favor of droning electro-pop synths and paint-by-numbers drum-machine beats. The only remaining band member from Some Loud Thunder is Pennsylvania singer-guitarist Alec Ounsworth, who also has a solo album and plays with both the Pelican Picnic and Flashy Python. That early 2017 Clap Your Hands disc I mentioned, The Tourist, despite going all but unnoticed outside a small but devotional following, is actually as solid as anything they’ve ever put out, thanks in large part to Ounsworth working again with Some Loud Thunder producer Dave Fridmann (Flaming Lips, etc), who this time mixed the tracks. Let’s hope the classic Casbah replay also includes a few of the newer numbers from a still-current album that didn’t got much of a promotional shot back in February.