Longtime busker in the house 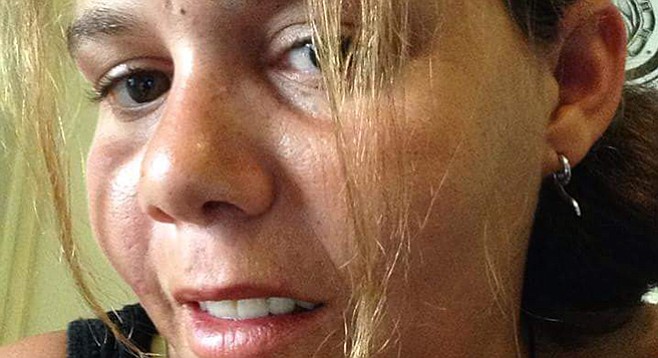 Homelessness tormented singer/songwriter Lena Evans for much of the past two decades.

“I grew up in San Diego. I’ve been homeless on and off since I was 14 by simple choices and mistakes I made in my life,” says Evans. The cycle “...started with running away from home. Drugs were a part of it.”

She also busked in O.B., which she calls bipolar. “There are some really nice people in O.B. But if you’re homeless or you’re not part of the O.B. surf and hate clique, people can be really mean. I’m a sensitive person and when I sing a song that I wrote and someone yells, ‘Shut up, troll,’ it makes me not want to sing there anymore.”

She said after Medi-Cal helped repair her mouth that had been ravaged from years of drug abuse, her life changed. “As soon as I got my teeth fixed I was hired at Ace Parking. We’ve been in a house now for three and a half years.”

She hasn’t busked for six months. “At this point I do it just to see friends I haven’t seen in a long time.”

Evans appears Friday for the CD release of her second album, Standing Tall. Like her first, it was funded entirely by a group named Synergy.

“I was playing the open mic at Winstons and Jefferson [Jay, the host] pulled me aside and told me there was an organization that may help me produce my album.... We eventually drove up to Solana Beach and I played for a bunch of fancy dressed people on these bleachers in a park.”

Synergy Arts Foundation underwrote the recording and manufacture of her first album, Life Is Good, which Evans sold at gigs for $10.

Synergy cofounder Naomi Nussbaum says the group helps out artists in need with grants of between $1000 and $3000. “She’s really come a long way,” says Nussbaum of Evans. “We also helped [the late] sax player Daniel Jackson with dental work and [metal band] Eucharyst with their tour. We helped [deceased blues singer] Candye Kane for many years.”