Do vacancies on University Avenue in Hillcrest signify too many eateries?

Contractor adds brick in The Wall while ephemeral eateries exit 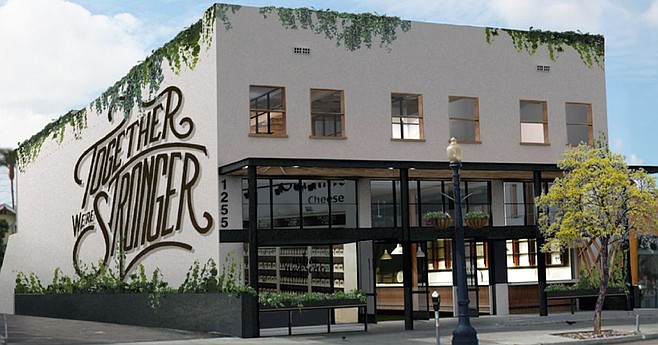 The Hillcrest hood, with its high commercial rents and constant turnover, is hoping to fill some of its properties along the main drag of University Avenue. Realtors there often attempt to lease similar businesses, such as getting a new restaurant into a closed restaurant space. 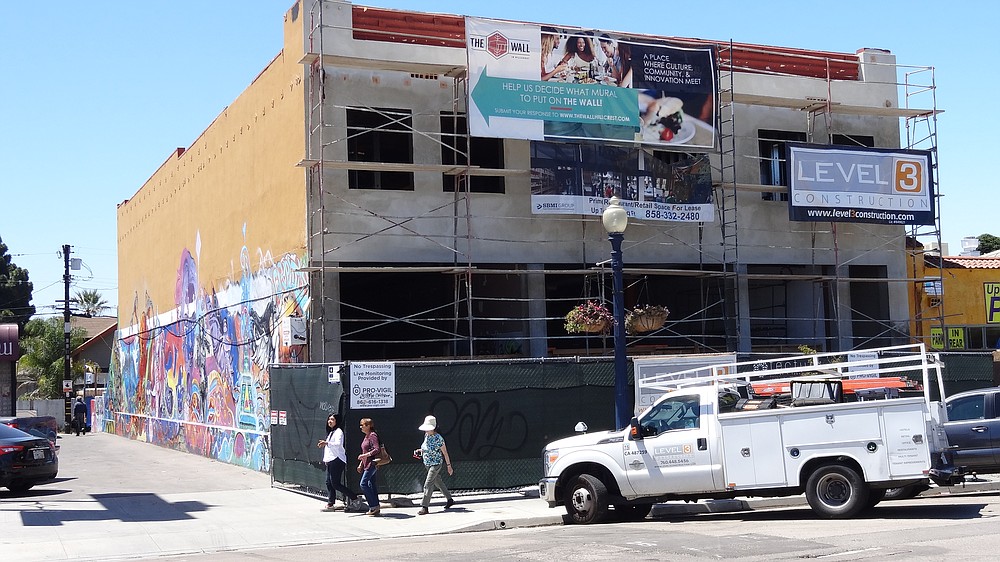 The Wall as it looks now.

But SBMI Group has outlined a different approach after its purchase of the historic Argyle Building at 1253 University Avenue for $2.75 million. The building had an early history of housing women’s clubs. Most recently the lessees included Body Alchemist and Herbal Lust. 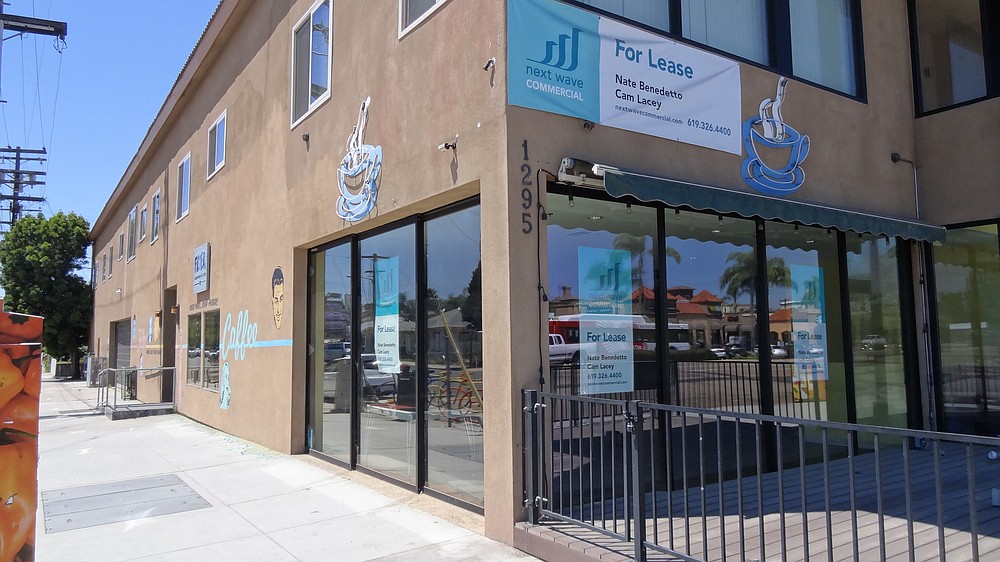 The old Filter locale has a 227-square-foot sidewalk patio.

The ongoing renovation by Level 3 Construction, Inc., reportedly costing $1.25 million, is creating The Wall. It will offer creative office and retail space on its two floors, comprising 10,680 square feet. Office spaces on the second floor will share a mezzanine; all tenants will have access to a communal lounge and an outdoor deck. Living green walls will be both in the lobby and on the building’s exterior. 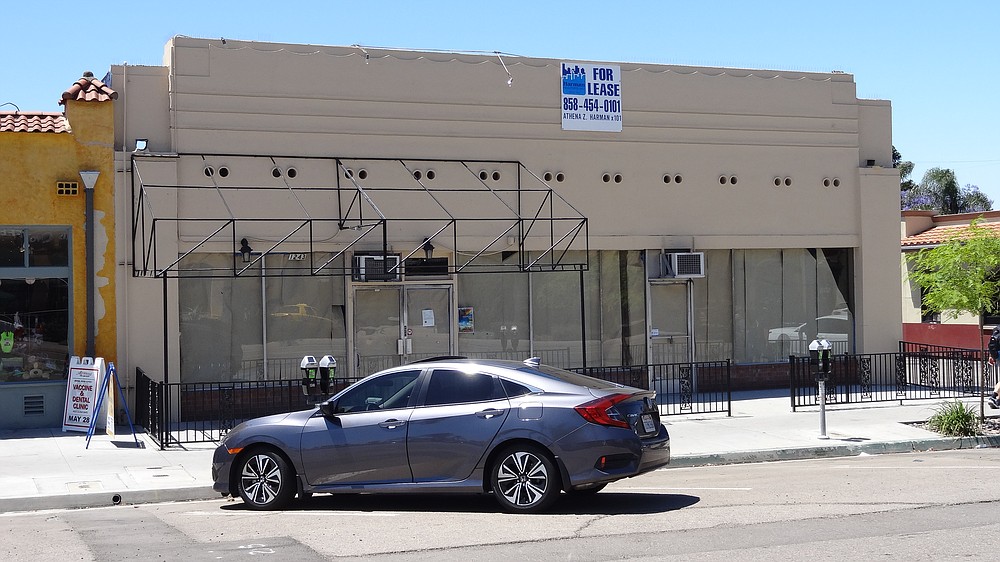 Wine Steals was once ensconced here.

Brandon Blum, managing partner at SBMI, told the Reader: “The Wall is bringing cool new innovative companies to the area, and is searching for a hot new retail concept. With the success of Trust, many restaurants are now starting to follow suit in the area with new hip concepts.” But Blum explained that “it doesn’t have to be a restaurant. We have been approached with many great ideas.” 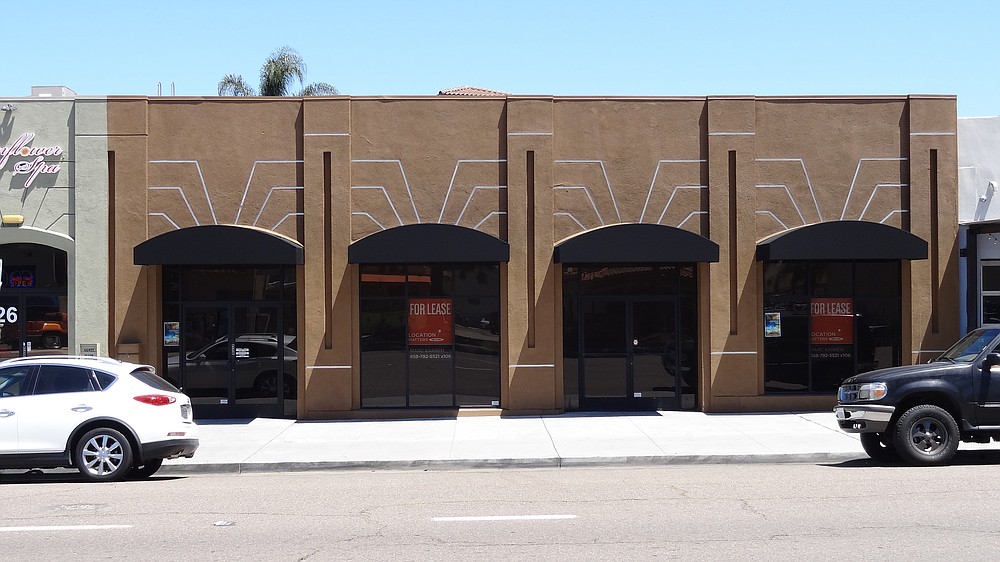 The former spot of Fido & Co., which relocated to North Park.

As for its upstairs offices, Blum provided a brochure showing typical rates: a 520-square-foot executive suite for $1,690, and a 975-square-foot “creative office” for $2,681 plus utilities.

At 1228 University Avenue is the former spot of Fido & Co., which relocated to North Park. [Behind that building, with an entrance on Cleveland Avenue, is shared-office space called Co-mmunity Creative Space.]

The 1228 location is being offered by Marc Karren, associate at commercial brokerage Location Matters Inc.. It contains 6414 square feet of divisible space plus a patio. So it’s possible they are scouting restaurateurs who might toss the dice.

[Benedetto, Karren and Athena Harman were all asked to comment for this article, but haven’t responded.]

To Steve Brown: I sure don't see much affordable housing coming to Hillcrest any time soon. The Boulevard apartments under construction at Florida and El Cajon Blvd. will provide some affordable units, though, in back of the main building.

A major problem for retailers on University is parking accessibility. Try to find an open space! Those locations with their own parking spaces tend to reserve them for employees and delivery vehicles, not spenders. At any given moment in daytime and evening, 68% of the cars you see moving around are looking for a place to park. (I made that number up, but it seems right) Notice that even bicycles have few places to park, and there are many of them.

There was a plan sometime back to put a parking structure at 301 University (where Walgreens is now). But that was shot down. Hillcrest did not need another pharmacy, but it was approved anyway. Perhaps some palms were greased to make it a done deal?

swell: You are forgetting all the customers who WALK around in Hillcrest, especially at night. Have you been in Hillcrest in the evenings to observe the pedestrian traffic?

There are still some great business' in Hillcrest however it has lost a lot of life to neighboring communities that are more welcoming and affordable to entrepreneurs. If you walk Hillcrest on a weekend then do the same in Little Italy or North Park you will certainly notice the later two have more thriving businesses and more foot traffic now. Great for those communities I actually spend more time there now and lyft over even though I can walk to Hillcrest since it is now tired and lacking life. Also a lot of friends will not bring their kids and families to Hillcrest because of the aggressive transients cleanliness issues of the streets.

Yes, Hillcrest is still struggling with homelessness. But so is North Park where I live. The current shortage of police is a factor. And landlords of apartment buildings in North Park often don't take an active role in keeping homeless from sleeping in their open garages accessed from the alleys. It happens regularly on my street and others nearby. Little Italy is certainly a huge success, even with the high rents there. It has clean streets and sidewalks, and crime there seems to be minimal. The Little Italy Association is very well-funded [$2.5 million + annually] and has 29 board members. So while it has been criticized for having a for-profit corporation manage the Association, from from what I've learned the arrangement has worked well for that neighborhood.