Techies spreading the mural and tags on social media 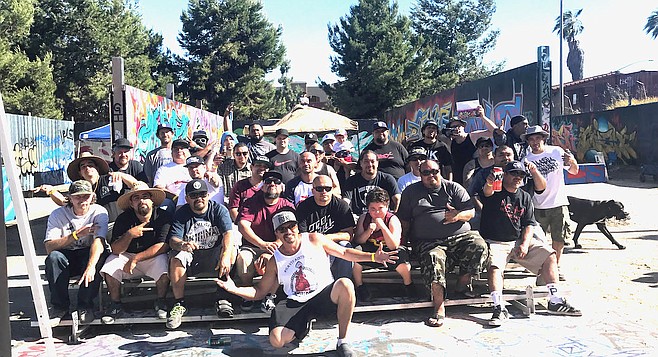 “I witnessed a few guys make amends with each other,” said Spek One, 44, “as well as myself with one of the guys that I actually got into a fist-fight [with] back in the day.” 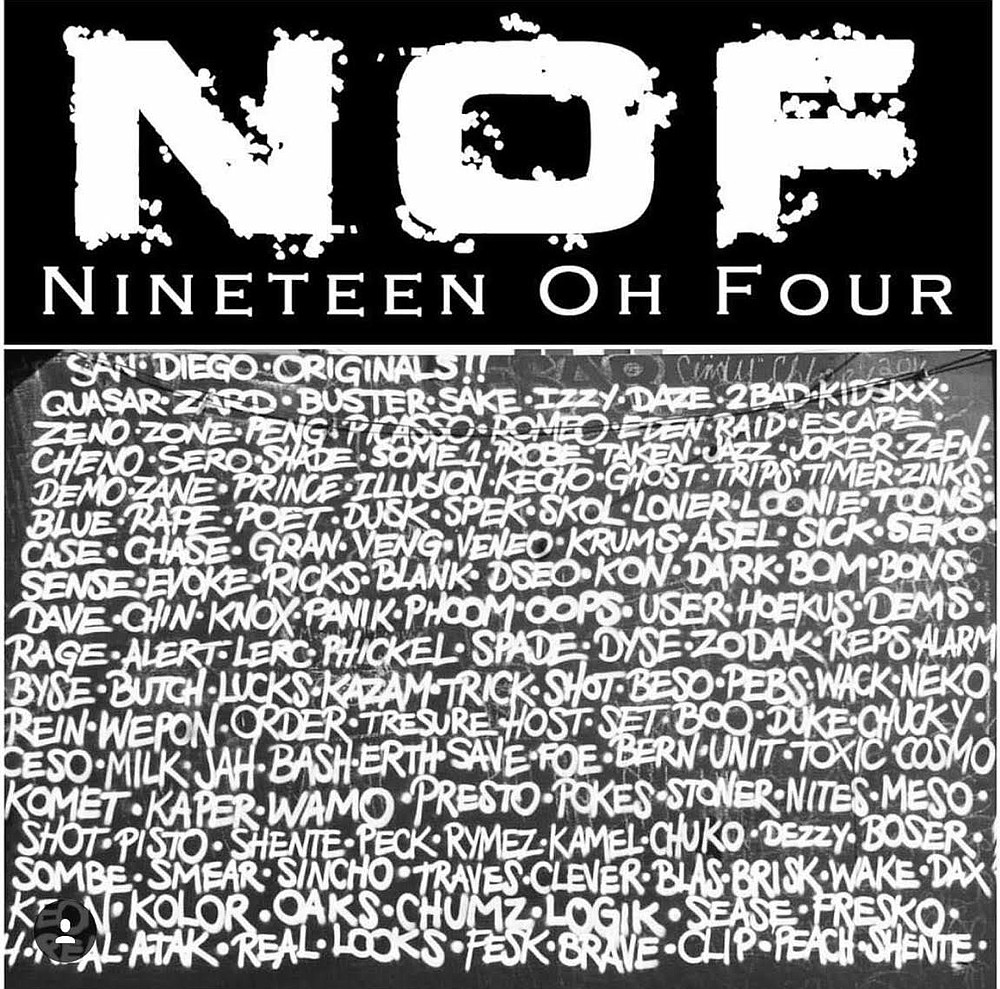 Spek was one of the organizers for the NOF (Nineteen Oh Four) annual reunion on May 20 at the Writerz Blok at 5010 Market Street. About 100 graffiti artists, taggers, and spectators from the 1904 (19 signifies the 19th letter “S” and 04 the “D”) sets came through in the afternoon.

Normally, in the last 20 years, meetings as this meant that “a squab” might ensue, “… but yesterday, we were able to squash it and [now] it’s water under the bridge; it was awesome,” he said. 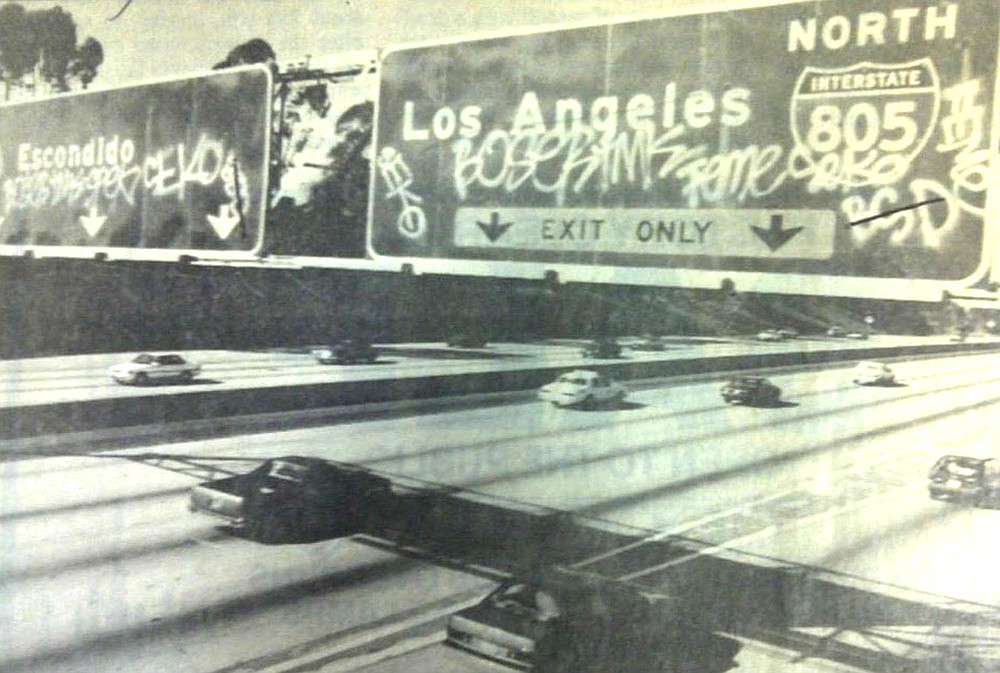 Barbed wire was installed on the San Diego freeway signs and certain billboards partially because of Spek’s rampages.

On the event flyer, it says “calling a cease to all beefs.”

Prior to last year, there was a 27-year gap since the crews connected because of problems original groups had with one another. 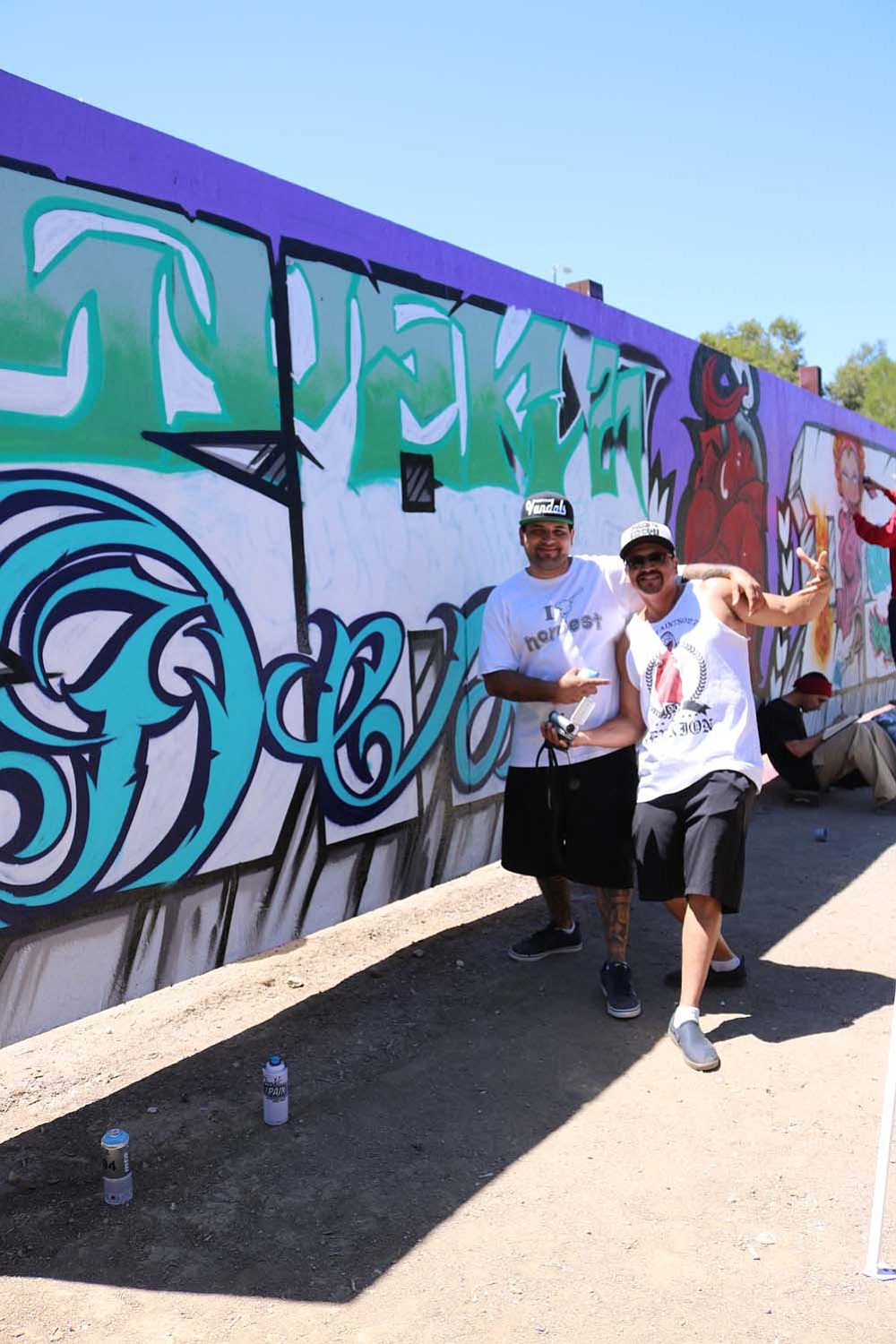 Frank "Veng" Crook and Spek. Crook: “If you wanna call it ‘biting,’ even biting is not easy.” 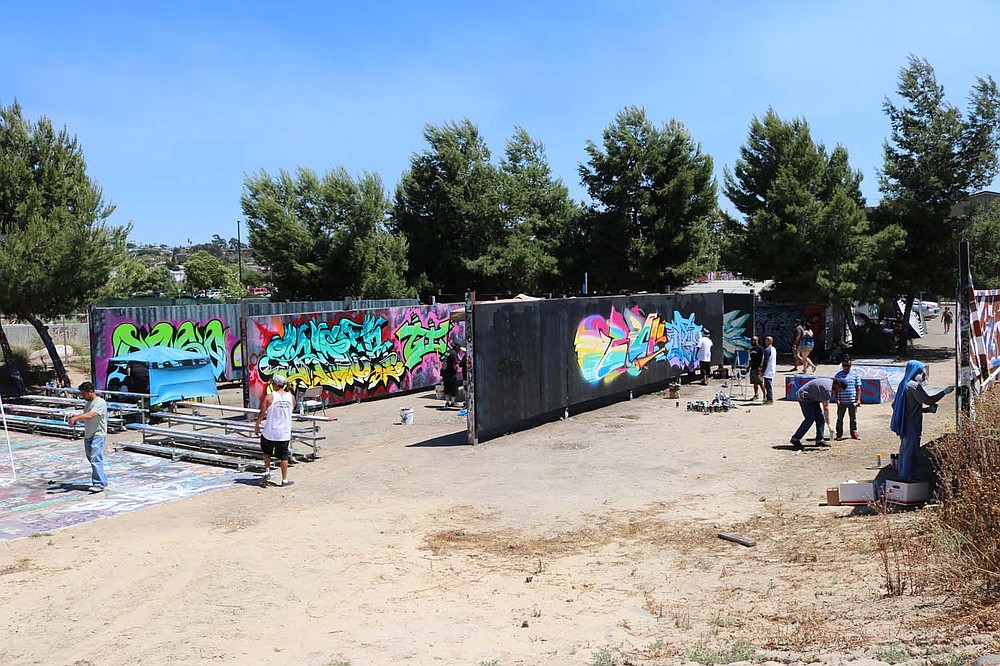 Josh (IPH): “A graffiti artist is a new term for what we use to call piecers, and the term taggers is what we called bombers back then.”

“I cannot get mad at someone [for mimicking another artist’s style],” said Frank “Veng” Crook, 41, “if you wanna call it ‘biting,’ even biting is not easy.” He’s been painting murals since 1989 — some were done at the Euclid Pit.

Crook says that their California style, which implements arrows and bars in an abstract design, are partially attributed to San Diego graffiti art legends, Dyse One and Sake.

“It’s [really] a hometown buffet of styles, thanks to the older generations,” said Crook regarding the art references on Instagram. His designs are now being embroidered into an urban clothing line and he has recently been commissioned to do a large mural in town.

“A graffiti artist is a new term for what we use to call piecers,” said Josh (IPH), “and the term taggers is what we called bombers back then.” Josh has been painting since 1987 and has dabbled in both formats. “A piecer is more artistically inclined with a [spray paint] can,” he said, “the better the can control, the more you can create flare effects, blends, and fades.”

Josh said that the taggers are responsible for what is seen in most neighborhoods. They are quick spray paint pieces of their crew names or aliases. Some of the beef on the San Diego streets happens because certain taggers cross into other neighborhoods and tag over graffiti art murals and other tags.

“I’m a [veteran] S.D. bomber from Sherman,” said Spek One, “I’m known for rocking the billboards and ‘mean-greens.'”

Spek said that he did it for the adrenaline rush back in 1988 to 1993, and he was notorious for the get-ups where he would climb billboards and freeway signs and spray paint his name or his Too Much Kaos crew-name acronym. The Evening Tribune did a story on his defacements of the 163 and 805 freeway signs around 1990-1991, but he gained street-notoriety for “smashing” (spray painting) a large billboard off Imperial and Interstate 5.

Word on the streets is that barbed wire and other deterrents were installed on the San Diego freeway signs and certain billboards partially because of Spek’s all-city rampages.

Graffiti life has crossed over into the mainstream. “Banksy is one of those that saw the benefit of our scene and implemented it into his work,” said Josh. Banksy pieces have sold for hundreds of thousands of dollars and he is known to have “hit up a few walls – illegally.”

He said that lots of techy people are into the graf-lifestyle and they have been spreading the mural and tag photos on social media since 2008. This opened another outlet for many that already had the art backgrounds and schooling. The spray paint can moved into the artistic repertoires before the majority of the real-deal graffiti artists and taggers pushed their expressionism via social media.

Spek One said that he has paid his dues for what he did back in the day. “We are just trying to teach these young cats,” he said, “regardless of the beefs that we had back then, that the love [for the life] is greater than the hate.”

Josh says that many of the painters have too much pride and that he helps the graffiti artists and taggers hash out stuff. “We are mentoring the next generation and telling them, ‘Hey, look, let’s keep it like this [the reunion], and it’s time to take ownership of what we’ve been doing [back in the 1980s-1990s]' and steer them back on the positive direction.”

Josh is a youth-delinquency-prevention program specialist. He, like many of the other graffiti artists present this day, pays out of pocket for his projects. Each spray paint can retails for about $6—$10 each. His last 35-foot by 30-foot project in Pacific Beach cost about $2000 for paint and a scissors lift (rental fee).

Looks like I didn't make the name or crew list. Sady my piece was capped in less than 24hrs of painting here. #norespectthesedays

A great way to offset the cost is for artists to release print editions on the back of public installations. Banksy did this very successfully with some of popular stencils becoming both signed and unsigned Banksy prints https://www.myartbroker.com/artist/banksy/