In case of car that crashed down from Coronado bridge 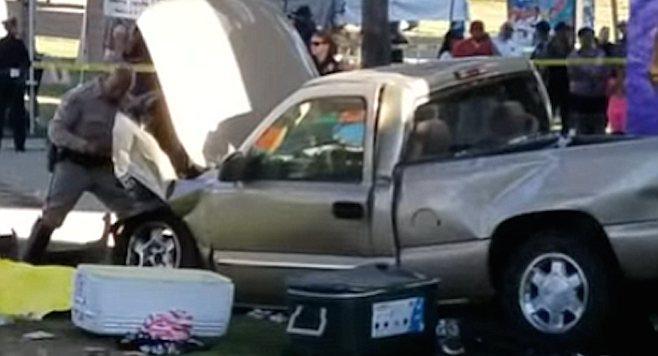 Victims and family members of those who died as a result of being hit by a drunk driver who careened off the Coronado Bridge into a gathering at Chicano Park have filed claims against the City of San Diego.

According to public documents obtained by the Reader, in early April eight claims were submitted to the city's Risk Management Department for damages suffered during the October 2016 collision.

On that day, active-duty service member Richard Anthony Sepolio, then 25 years old, lost control of his truck while sending a text message and drove over the bridge's guard rails, plunging 60 feet into a large gathering of the La Raza Ride motorcycle festival. A blood sample take an hour after the accident revealed that Sepolio had a .08 blood-alcohol level.

The claimants include two family members of Annemarie and Cruz Contreras as well as others who had been injured in the crash.

Among the injured to file claims are Ruben Carrillo, a resident of Santa Ana, and Victor Garcia.

Carillo says injuries he suffered from the accident have caused him to miss work and rack up medical expenses. He values his claim at $5 million.

As for Garcia, a specific dollar amount was not included in the claim but is estimated at being greater than $10,000.

The claims were filed between April 3 through April 13 of this year. The city has three months to respond to the claims. If denied, the claimants typically decide to file lawsuits.