Usually, I preach all corn tortillas, all the time. But for Don Pollo, I make an exception. 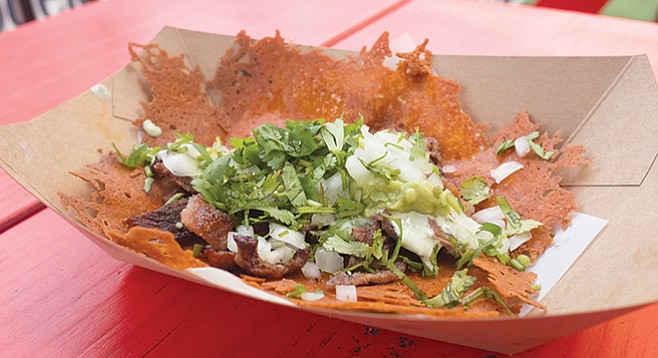 In Spanish, mezcla means mixture, and this mobile kitchen may be best known for mixing it up with a fusion twist, filling tortillas with carne asada recast as sweet Korean BBQ–style short ribs for $3.50. But when Mezcla steers closer to traditional tacos, it’s just as good, if not better (and 50 cents cheaper). The birria-like chicken barbacoa bridges the gap from sweet to spicy, but tops on my list are the carnitas. Like the others, they consist of a thick wad of flavorful meat stuffed into a corn tortilla. La Mezcla hits Fall Brewing on Tuesday nights. For the rest of the week, follow that Facebook page!

Last year, Famoso graduated from food truck to taco storefront, and while you can still chase the truck around if you like, I’d suggest dropping by the shop between 2 and 6 p.m. Normally, street tacos go for three bucks, while gourmet street tacos go for four. During happy hour and Taco Tuesday, it’s three for $5. For that you can get a beer-battered avocado taco, a french-fry-laden California taco, or the clear favorite: a queso taco. That features a crispy-at-the-edges swath of melted cheddar cheese clinging to the inside of its corn tortilla, filled with your choice of meat and a dollop of guacamole.

Out of the way but worth the effort, Don Pollo offers a street-tacos plate for $6.75 that will net you three tacos, each featuring chunks of chicken folded into a soft corn tortilla with guacamole, etc. But to experience the small restaurant’s best, I recommend taking the effort a little further. Order a chicken plate that ranges from $5.50 to $8, depending how many pieces you want, and make your own tacos with the chicken, grilled onions, and tortillas provided. Usually, I preach all corn tortillas, all the time. But for Don Pollo, I make an exception — pack its exceptional grilled chicken into flour.

Named after the tortilleria and market across the parking lot, this freeway-adjacent strip-mall shop gets high marks for its tasty salsa — popular enough it’s sold by the tub. But a big reason the family-owned restaurant has been pulling in North County crowds for more than 30 years now is by offering sizeable tacos at a bargain price — which these days amounts to about $2.78 apiece. You can’t go wrong with its tried-and-true lineup: carne asada, carnitas, adobada, and cabeza, if you’re into it. All are made on doubled-up soft corn tortillas made across the way, with generous portions for any part of the county.

A block from the beach, this broom closet of a shop takes inspiration from taco carts. And while it’s a clear step up, there’s barely room inside for more than a line of taco fans. Tacos go for two or three bucks, depending what’s on them, but regardless which you order, a choice of tortilla includes either flour or corn. Whichever tortilla you choose, you may watch it being made to order. Portobello mushroom, shrimp, and fish join the usual suspects in filling these difference-making fresh tortillas, but I gravitate to the less predictable pulpo al pesto — chopped octopus mixed with basil pesto and topped with chipotle aioli and melted cheese.