It's a slippery, messy delight

Almost anything on the menu can be taco-ized to order 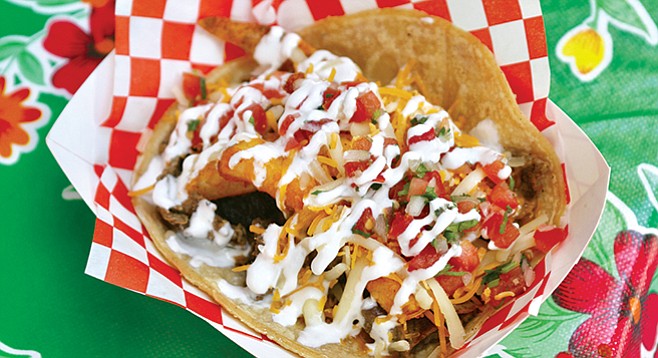 The moniker translates to “Here is Texcoco,” an homage to the Texcoco region of Mexico, largely considered to be the birthplace of barbacoa in that country. The specialty of the house is borrego barbacoa, lamb barbecue, the preparation for which involves the entire animal being covered in maguey leaves and roasted for hours. Assemble-your-own platos come in ⅓- and ½-pound sizes served family-style and feature the familiar rib or loin meat as well as pancita (tripe), cabeza (head), or sesos (brains), ready for dipping in the well-seasoned lamb broth that comes gratis. Lamb isn’t your thing? Not to worry, almost anything on the menu can be taco-ized to order, including moronga (a sausage similar to Spanish morcilla), huitlacoche (corn “truffle”), chapulines (grasshoppers), and the more conventional chicken, pressed pork belly, mushrooms, zucchini flowers, nopales, or poblanos.

Homey and unpretentious, Amorcito Corazón recently celebrated its second anniversary in the hotly competitive 30th and Upas neighborhood. Tacos are generously proportioned on six-inch double corn tortillas; two are pretty filling. I’m always tempted by the shrimp taco, three fat pink curls under a bit of cabbage, salsa fresca, and avocado wedges; crisp battered fish gets the same treatment. Just the right amount of rich chili accents the pork adobada; and the carnitas, traditionally topped by cilantro and white onion, reminds me of the taco stands in Loreto. Grab some of the thin, non-greasy chips and salsa from the self-serve station to munch while you wait. And — I know, not a taco — but their California burrito is stuffed with curly fries if you are into that sort of thing.

¡Salud! takes traditional comfort-food fillings ranging from al pastor, carne asada, carnitas, fried catfish, and pollo asado, then tucks them into thickish, sturdy hand-pressed corn tortillas. Two standouts are the Taco de Barrio, sumptuous carne guisada, nopales and long-simmered frijoles, and the birria, shredded pork in mole sauce, its tortilla wrap flash-fried to a crisp. Any morning is a good time for a breakfast taco — an over-easy egg, chorizo, bacon, avocado, and queso folded into a house-made flour tortilla. Try any or all of the fresh, lively salsas, from creamy mild to tongue-scorching. There’s a respectable number of local beers on tap, daily aguas frescas, and a short list of cocktails, including the Hooch Horchata and Vampiro Michelada.

The menu at this casual counter-service spot revolves around tacos served on housemade tortillas. Fillings span the gamut from traditional carnitas, al pastor, and asadas to bacon-wrapped shrimp to homemade longaniza, a spicy pork sausage closely associated with Portuguese linguiça. I love the chile relleno taco for its crunchy batter and Oaxaca cheese stuffed poblano chili, but I can always be tempted by the kitchen-sink-style campechano, DF-style (Distrito Federal Mexico, or Mexico City-style) seasoned steak, longaniza, nopales, onions and asada potatoes. There’s even a riff on the beloved, french-fry-stuffed California burrito, done in taco fashion. Quench your thirst with an agua fresca or choose from the modest selection of draft or bottled beer or any number of margarita flavors.

Named after the Aztec goddess of the maguey plant, this dusky cantina is known for its extensive collection of, and expertise with, tequilas, mezcals, sotols, bacanoras, and racillas, but they make a mean taco, too. I’m partial to the tangy, spicy, pineapple-chipotle basted chicken under a zingy tropical salsa. Ono and shrimp also get the al pastor–like treatment before a quick sear on the grill. Try the tender marinated sirloin under a shower of jack cheese or carnitas simply dressed in chopped white onion, cilantro, and salsa verde. Let the knowledgeable staff help you select a tequila tasting or go for a refreshingly tart margarita — the simple ingredients of organic lime juice, agave syrup, and a splash of brandy liqueur enhance your choice of tequila or mezcal.