Is this the end of Harbor Music Hall?

“The street traffic is louder than our saxophone player." 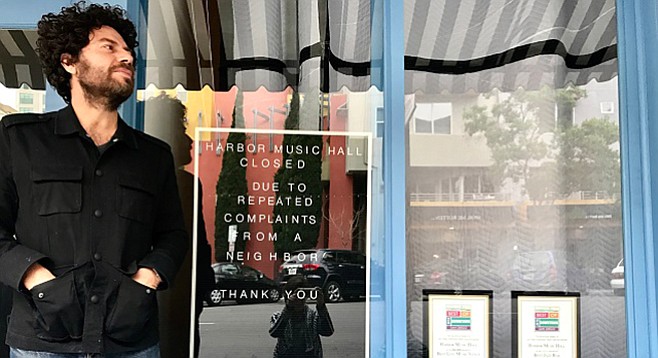 San Diego jazz fans might be on the verge of losing another music venue now that Harbor Music Hall (1506 India Street) has been threatened with the potential loss of their beer-and-wine license due to noise complaints from a neighbor.

Harbor Music Hall opened in the summer of 2016 and won awards for “Best Jazz Bar” and “Best Music Venue” from Downtown News. Business started slowly, according to operator Eddie Hernandez, but picked up almost immediately.

“I would say within three months we were packing the house almost every night,” he says. But with the uptick in business came other concerns. “There was an immediate response by a group of concerned citizens in the neighborhood — about 13 of them,” says Hernandez. “We had a meeting with them and it seemed that everything was fine. But one of them in particular has held out and continued to complain. The other 12 come here to eat and even attend the shows; it’s just that 1 person.”

Hernandez disputes the noise complaint that threatens to shutter his establishment.

“Outside, across the street, the musicians look like mimes — like they were pretending to play music. You could not hear anything — nothing whatsoever.”

Yet, he shut down the music voluntarily.

“One person has just cut off the work of 50-plus musicians, 5 employees, and thousands of dollars from someone who is just trying to bring music into the neighborhood.... The [state bureau of Alcoholic Beverage Control] needs to be a little more understanding. If you live downtown, there’s going to be noise, [but] the street traffic is louder than our saxophone player....

“We are going to go through the proper channels and we’re going to ensure that we are in front of the council of the [state alcoholic beverage] board and make sure they understand that it is completely unfair that one person can cause our license to cease to exist."