Coastal Commission to Encinitas — No!

Bike trail must go east of the tracks 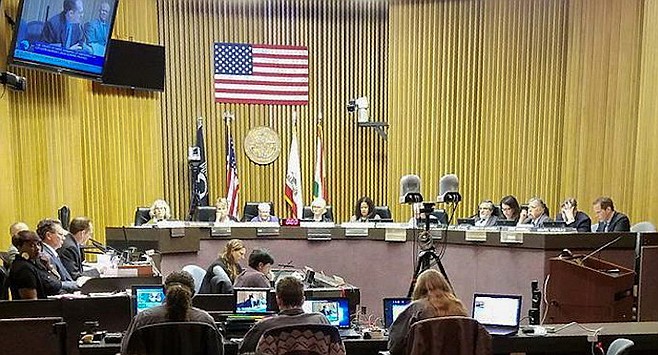 After a 13-hour meeting, the City of Encinitas’ attempt to increase bike and pedestrian safety and mobility along the Highway 101 corridor was dealt a big blow.

Despite unanimous city council support for a proposed bike lane and rail trail project along the westside of Cardiff by the Sea’s section of Coast Highway 101 and railroad tracks, the Coastal Commission voted against the community, 12 - 0.

The decision now requires the rail trail project to be placed on the east side of the tracks, in the railroad right of way and up against San Elijo and Vulcan Avenues.

“I’m tremendously disappointed,” Mayor Catherine Blakespear told me. “We’ve spent much time and energy on this. It was unanimous with the council, we had community consensus, and the improvements would have been good for the city.”

According to Blakespear, “The commission staff was against us, making the argument that there was no physical or environmental constraint to building the trail east of the tracks inside the rail corridor, where it has been planned for the last 20 years, and therefore Encinitas shouldn’t be allowed to deviate from the plan.”

“The city is now unable to control the project” said Blakespear. “The Coastal Commission is the final decision maker. There isn’t a higher body to take our case to. We now have to adapt, doing the best we can with the realities in front of us.”

“There’s already a bike lane on Coast Highway,” said Bill, a San Elijo Avenue homeowner that will now have the trail in front of his ocean view home. “That’s where people want to walk and ride, on the Coast Highway bluff top, overlooking the ocean, not up on the hill on a busy residential street [San Elijo Avenue].”

Commission staff repeatedly suggested the city should do both east and westside projects. But SANDAG had designed and is paying for the rail trail project through Caltrans funds for carbon mitigation relating to I-5 freeway widening. Although SANDAG supported the city’s westside plan, the funding has to be used as the Coastal Commission decided.

The 1.3 miles of bike lanes and trails between Chesterfield Drive and D Street, the project in question, will now have to switch to the east side of the tracks. A railroad pedestrian crossing in Cardiff will need to be built at either Verdi Avenue or Montgomery Avenue. “We can’t keep people from getting to the beach, “ said Blakespear.

So...according to the Coastal Commission, the bike lane must be east of the tracks, but storage of radioactive material must be right next to the Pacific Ocean. Got it.

ADDITIONAL STORYLINE: Due to space limits, I did not include, to his credit, that San Diego County's rep. on the Commission is Supervisor Ron Roberts. Roberts first made a motion to override staff and go with the Encinitas/SANDAG plan for the westside, but it failed 5 - 7.

My error. It was SD Cty Supervisor Greg Cox that sits in the Coastal Commission and made the first motion.