Wash your hands if you touch velella 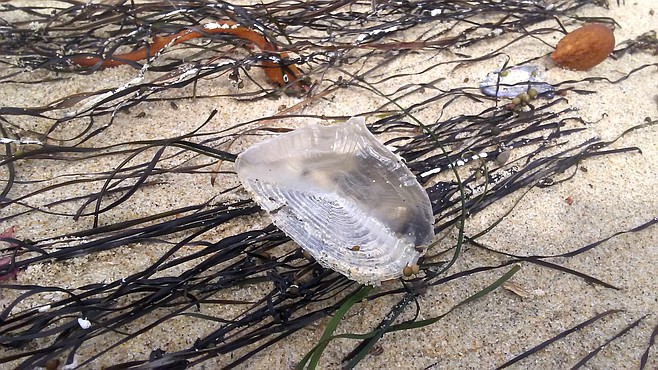 Chances are, if you walk along the shore in Ocean Beach, you’ll notice an influx of Velella, aka sea-raft, by-the-wind-sailors, purple sail or sometimes, blue jelly-fish. 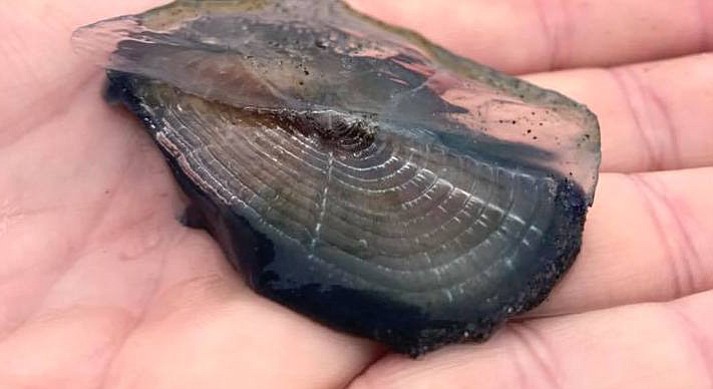 “Because of this unique body architecture with that sail projecting above the water, they are subject to surface winds and wind driven currents.”

Usually deep-blue in color, they live on the surface of the ocean using a tiny stiff sail that leaves them at the mercy of the wind. These carnivorous creatures catch their prey by tentacles filled with toxins that hang into the water below them. Once beached, they die and turn translucent, exposing their intricately designed system.

“These animals are truly what we call passive drifters,” Linsey Sala from the Scripps Institute of Oceanography told me. “They have no other means of locomotion so they are really at the mercy of the prevailing winds and currents and therefore can be subject to these types of mass strandings.”

For example, in April, Oregon welcomed the ‘blue-tide’ due to the proliferation of the Velella-Vellela.

Although there is no way to predict mass stranding’s of Velella-especially to the extent that Oregon has seen, it is not uncommon in the Spring and Summer months for them to wash ashore in San Diego.

“They typically reproduce in the deep sea over the winter and then this surface dwelling hydranth stage is commonly seen in the Eastern Pacific including the coastlines of San Diego during the spring and summer months when food is more abundant…from their presence, we appear to be experiencing some level of shoreward flow.” Sala explained. “Because of this unique body architecture with that sail projecting above the water and no other means of locomotion, they are subject to surface winds and wind driven currents.”

It’s important to note, wash your hands if you touch one, the Velella contain toxins, just like jellyfish, and may cause skin irritation.

“These animals do possess stinging cells and neurotoxins to shock and capture their small zooplankton prey,” continued Sala.

Oddly enough, one of the main predators of Velella is the “purple” snail aka the Janthina that washed ashore in March.