Redistricting may mean a third time on city council 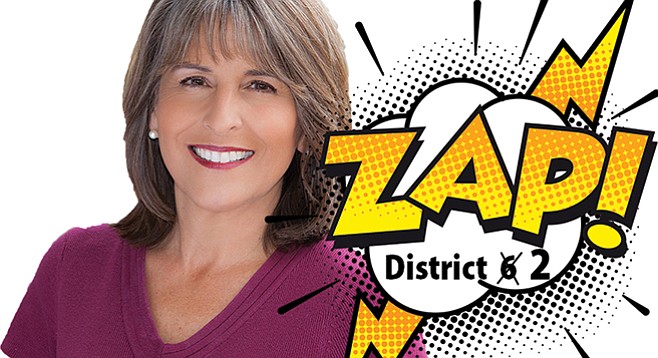 Republican San Diego city councilwoman Lorie Zapf was first elected in 2010 to represent District 6. She was reelected in June 2014 from District 2 after her house ended up there as a result of 2012 redistricting.

Now she is planning to take advantage of the unique situation to escape the city’s usual two-term limitation. On May 1, she filed with the city clerk’s office to set up a new fundraising committee for yet another second district election bid next year.

Lobbyists working city hall turned out in force for a “retire the debt fundraiser” held on behalf of newly elected city attorney Mara Elliott, successor to the GOP’s Jan Goldsmith, now working for the downtown law and lobbying powerhouse Procopio.

Democrat Elliott is widely viewed as having higher political aspirations and is already working the special-interest circuit, per the May 1 influence-peddling disclosure report of Rath Miller, LLC, which says company principals Phil Rath and Kimberly Miller, once married to ex–Jerry Sanders media handler Darren Pudgil, cohosted the February 16 event, coming up with $5300. Pudgil, meanwhile, has also been working for La Jollan hedge-fund magnate Mike Stone and his partners in their bid to take over the 165 acres of public land commonly known as Qualcomm Stadium.

A May 1 disclosure filing by Stone’s group says Pudgil & Company has picked up $9941 in consulting fees. An opposing group, funded by Sudberry Development and H.G. Fenton, has paid IVC Media, run by the son of ex-Democratic state senator Steve Peace, $75,000 to help combat the project.