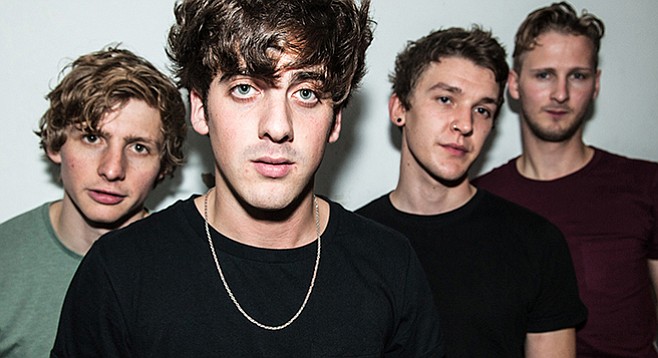 The final date of Circa Waves’s headline tour supporting their sophomore album Different Creatures hits the Casbah on June 14. The Liverpool lads have beefed up their somewhat twee sound, thanks in no small part to wall-o-crunch co-producer Alan Moulder (the Killers, Arctic Monkeys), but at heart the quartet still seems to be plying the same sort of BBC-beloved pop music that earns them high marks in UK mags like NME and Kerrang. U.S. critics have been more lukewarm and stateside audiences far smaller, but this show is one of only two on this tour to include an opening set from Manhattan rock trio Dreamers, which could easily help sell out the club. 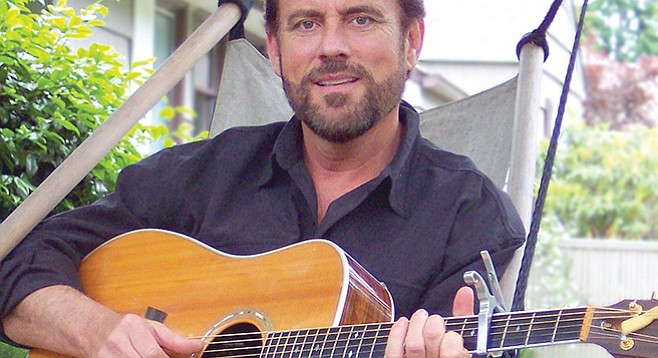 “After over a decade of occasional correspondence,” says AMSDconcerts promoter Carey Driscoll, “I’m happy to announce that Michael Tomlinson has finally been booked for his first San Diego show in over 15 years.” The performance takes place June 30 in the auditorium at Sweetwater High School in National City. “Michael does very few concerts, so this will be a rare treat,” notes Driscoll, who personally solicited a list from Tomlinson of previous AMSD acts “whose fans he thinks would be most likely to like him, too.” Tomlinson’s RIYL checklist includes Jimmy Webb, Jesse Winchester, Chuck Pyle, David Wilcox, Danny O’Keefe, Karla Bonoff, and Livingston Taylor. 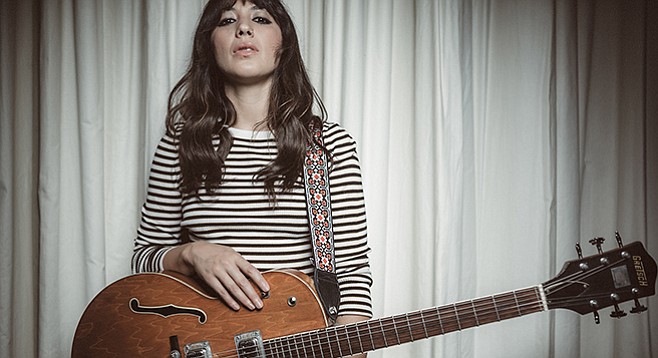 Tix go on-sale Friday, May 12, for Michelle Branch at the Music Box on July 22. Having recently hooked up with Black Keys auteur Patrick Carney, Branch is on a bit of a comeback trail, with nothing but a 2010 EP between 2003 and her new album Hopeless Romantic, released last month. She spent years waiting on two ultimately unreleased records before finally moving on from both her marriage to her bassist (they divorced in 2015) and her old record deals, signing instead with Verve/Universal Music Group. Her debut for the label shows some of the same flashes of humor she displayed last year when spoofing one of her own songs on Full Frontal with Samantha Bee, though one hopes that her concert setlist will also include tracks from throughout her career, including maybe a Wreckers tune and perhaps her 2014 cover of Radiohead’s “Creep.”

When Steve Earle plays the Belly Up on August 10, the show will be opened by cosmic country husband-and-wife duo the Mastersons, who’ll also perform as members of Earle’s band, the Dukes. The Mastersons just dropped their Transient Lullaby full-length via Red House Records, offering up a third helping of the adventurous string arrangements and butterfly-delicate harmonies that have made them popular at folk and bluegrass festivals. Their appearances on NPR’s Mountain Stage and elsewhere around the alt-oldies radio dial have earned them accolades as the likely successors to previous potentates on the folk scene like San Diego’s own Nickel Creek.

The lineup has been announced for the San Diego Blues Festival at Embarcadero Marina Park North on September 9. Starting at noon, players will include Mavis Staples, the California Honeydrops, Joe Louis Walker, Rick Estrin & the Nightcats, Chris James with Patrick Rynn & Aki Kumar, Missy, Mercedes & Sharifah, Leo Bud Welch, and TJ & the Suitcase. Chicago gospel singer and multiple Grammy-winner Staples has performed at the White House and been inducted into both the Rock and Roll and Blues halls of fame. Joe Louis Walker has musical connections to everyone from Freddie King and Otis Rush to Earl Hooker and Michael Bloomfield. Locals representing the left-coast scene include Blue Largo, which plays original music and big-band jump blues, mixing in ’50s and ’60s R&B, straight-up boogie, and heartfelt soul.

Remember that comeback tour Janet Jackson launched in 2015, but then cancelled partway through? It’s back on, with a 56-city North American trek that includes an October 7 stop at Valley View Casino Center, a venue she last visited in September 2008. According to the press release, the new mother still plans on showcasing her now-two year-old Unbreakable album, as well as “an array of her socially conscious music” and “soon-to-be released new tracks with a state of the art live production.” The same State of the World Tour announcement describes it as “a continuation of the Unbreakable tour,” which played Viejas Arena almost exactly two years previous (10-17-15), so it’s unclear if this date at the former Sports Arena will essentially be the same show in a bigger room. That 2015 setlist was pretty light on “socially conscious” music, but it did feature several multi-song medleys mashing three to five tracks together at once, bringing the total number of tunes performed (at least partially) to around thirty, plus two encores. Let’s hope being a new mom has only increased her stamina! 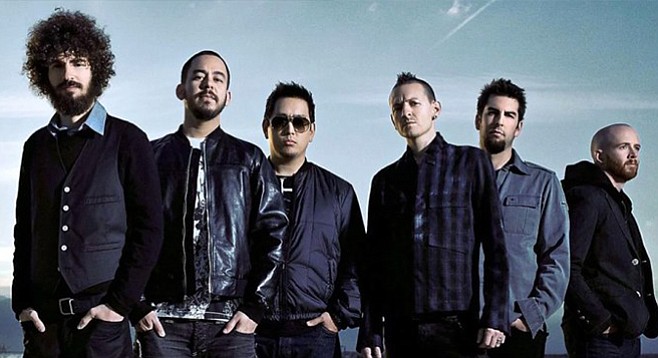 Linkin Park will do some genre flirting at Mattress Firm

As it so happened, I was listening to Linkin Park’s seventh studio album One More Light when their October 20 date at Mattress Firm was announced. As usual, there are flirtations with any number of genres, including a collaboration with Pusha T and Stormzy, “Good Goodbye,” where the latter’s British accent was so indecipherable that I had to scare up a lyric video in order to translate his passages. If you sign up for the pre-sale before tix are offered to the general public on May 12, buyers are promised “fan-first technology to level the playing field and ensure fans compete against other fans for tickets, not software. The more you participate, the higher your spot in line and the better your access to tickets.” Hopefully you read this column close to the run date, ‘cause, after Friday, it’s you against the scalp-bots.

Fall Out Boy may not be welcome on the set of Saturday Night Live, where their rowdy antics reportedly almost knocked down a set, but fans will be lining up outside Viejas Arena on November 15 to see the Chicago band pitch their upcoming Mania album, due in September from Island Records. Their previous full-length debuted at number one on the Billboard Top 200 chart, but that was all the way back in January 2015, at least three Pete Wentz haircuts ago. At this writing, only one new song is available for preview, “Young and Menace,” whose promo video features lyricist Wentz attempting to channel some sort of inner youthful rage that probably rings a lot more unintentionally humorous than the 37 year-old millionaire intended.