Rock out in the whipping wind above Ocotillo 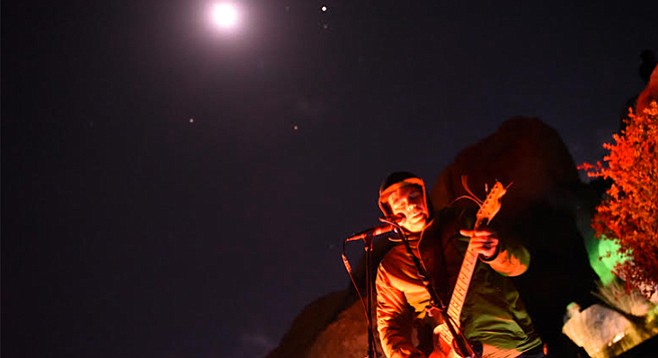 For the past four years and for the price of a few burritos and a couple beers, Jim Ko-Pah’s and John Ko-Pah’s high-desert “High Jinks” has been one of San Diego’s best kept secrets among musicians and veteran showgoers.

June 3rd’s In-Ko-Pah 4 invites you to rock out with 14 Southwestern acts on the eastern edge of San Diego County, where spring wind whips through granite hilltops and rustles cholla spines before dropping into Ocotillo, 3000 feet below.

Past lineups have showcased up-and-coming acts alongside San Diego mainstays such as the Downs Family, Three Mile Pilot, and the Schizophonics. This year’s lineup highlights locals such as the Mattson 2, Mrs. Magician, Birdy Bardot, Creepseed, the Bassics, and Archons, along with visuals by resident analog projectionists Operation Mindblow. Admission includes parking, access to the Desert View Tower and Boulder Park, and whatever organizers decide to barbecue. Bring your own beverages, pitch a tent, and behold rock-and-roll in its natural habitat: the wild.

In-Ko-Pah has held to the nonprofit model and has operated at a loss every year. This time around, Jim calculates that 325 tickets sold (sales cap at 400) would allow the event to break even, noting that In-Ko-Pah has averaged 450–550 in attendance each year, about half of those being with a band or production.

Jim: “Regulations, lots of terminology for each step, the term ‘sponsors,’ that never used to exist, ‘insurance,’ just a lot of legal, time-consuming stuff to do. A festival used to be something you went to with family and friends and you hung out for a couple of days and had fun. Now it’s something you need to create a four-month payment plan to just attend. It’s really not the right direction for music.”

John: “It’s treating people like a commodity. If you treat people like human beings — wow. We have a lot of power within people. I think that’s part of the interest I have in this. Hearing music outdoors to me is the most liberating, freeing experience. Getting together and building something with your friends, that’s what it’s all about.”