Photography, glamping, wining, and star gazing: all a couple hours away. 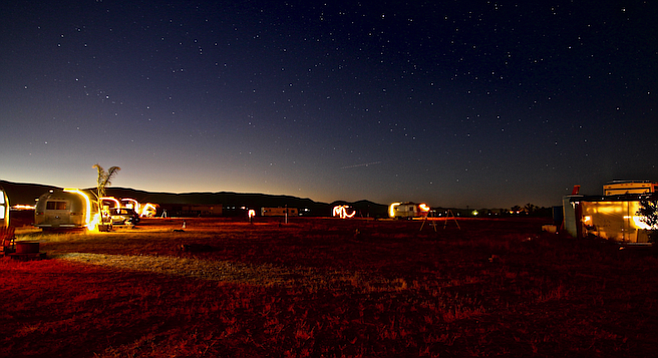 Two hours south of San Diego, around sixty miles from Tijuana, sits Valle de Guadalupe inside Ensenada, the largest municipality in all of Mexico. Dozens of wineries with tasting rooms and fancy eateries sit near each other. It's Baja’s equivalent of Napa Valley, but at a fraction of a price. (That price can be still high, with some hotels charging over $400 a night.)

I’ve been meaning to spend the night in Valle for a while. Not for its fancy wines or expensive rooms, but to take long exposure pictures of the stars. One lonely dude taking pictures at night sounds really sad and nerdy, but luckily I’ve been dating an amazing girl the past four months, and we were in need of a getaway.

Because of Labor Day in Mexico, she had Monday off, so we headed out to Valle on a Sunday afternoon. 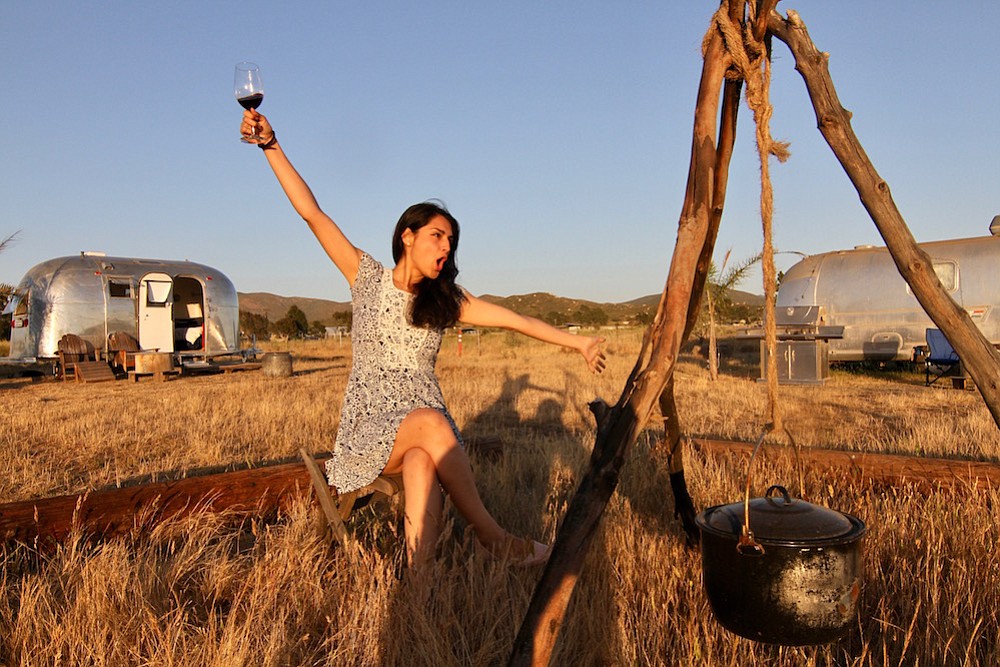 The cheapest way to spend the night in the middle of the wineries is “glamping” (a portmanteau of the words camping and glamorous). The cheapest glamping in the area is Colección de Airstreams Ruta de Arte y Vino for $70 a night through Airbnb — or contact them directly through Facebook. The other glamping option is Cuatro Cuartos, which goes for $200 a night, and it’s two nights minimum on weekends.

Neither of us is big into wine, but we do love traveling, fancy eats, and craft beer. Not fully knowing what we were getting into, we packed the car with snacks, a guitar, photography equipment, a mixed craft beer six-pack, and blankets.

After some light off-roading, we arrived at the glamping site around 4:30 pm. The site is near one of the biggest wineries, L.A. Cetto, and the eatery Doña Esthela. César, the guy in charge, received us and eagerly offered us a glass of wine on the house. Unfortunately, he couldn't find the corkscrew and told us to help ourselves to Tecate Light from the fridge.

The glamping site consists of 10 Airstream trailers with a fire pit each, a general outside kitchenette with a hammock and some furniture, a single communal shower, two small bathrooms, a small playground, four dogs, a few different sized bicycles, one telescope, and scattered plastic toys.

César told us we could choose one of the five empty trailers. The first was nice but a tad too small. The second one was way bigger, but with separate beds, and with an older feel. The third one had a nice queen size bed, a poop emoji pillow, a plastic Gundam Wing pinball machine, and a small lava lamp. It turns out this Airstream was the one where local famous DJ Chucuchu stays. The other two were okay, but we had already decided on the third one. We got the key from César, some basic directions, and headed to the nearest wineries. 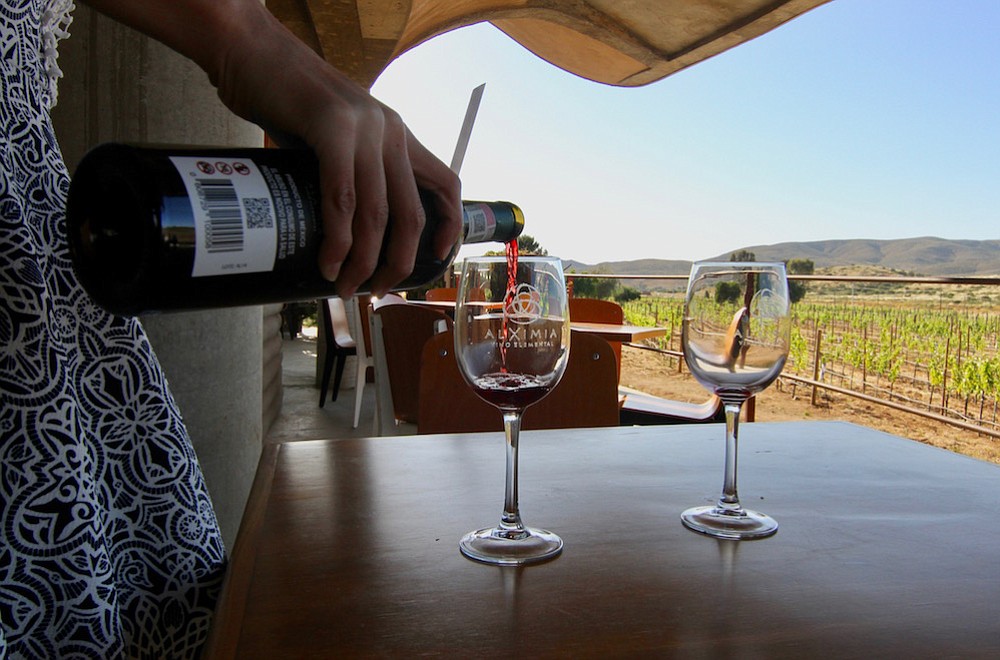 We got to Rondo Winery at 5:30 pm. It was only 15 minutes away but it about to close. We had a couple of wine samples for $2 each. Not convinced, we headed to the next nearest winery, Alximia (“Elemental Wine”).

In Alximia, they gave us free tasters. We told them our wine preference, and they recommended a $28 bottle named Gaia but did not have a taster available. After a coin toss, we opted for the sampler we liked the most and a cheaper bottle for $15 named Alma, Spanish for soul. A mix of 40% Petit Verdot, 40% Barbera, and 20% Tempranillo.

To accompany the wine, we got some Oriental ceviche for $13 — a mix of fish, shrimp, and octopus mounted on lettuce, with ponzu sauce, jalapeños, cucumbers, sesame seeds and more.

Most wineries close at sunset, and since I had to drive, we grabbed the rest of the wine to go and went back to the glamping site. We stopped by a cheese store for some bread, chiles, and five kinds of cheese: jalapeño, basil, pepper garlic, parmesan, and chipotle. Back at the site, each neighbor was having their small private party sitting on lawn chairs, drinking wine next to a wood fire in front of the caravans. César had a party of his own in the kitchenette.

With cheeses, snacks, three-quarters of a bottle of wine, and beers, my girlfriend and I set up our party in front of our caravan. She, with great effort, got the fire going while I set up the camera and started light painting and taking romantic pictures. We ran out of alcohol around 10 p.m. The moon was shining brightly above us, ruining the picture I had in mind. César told us he was going to run to the store and offered to grab anything. We asked him for another bottle of cheap wine, but drunkenly went to sleep before César made it back. 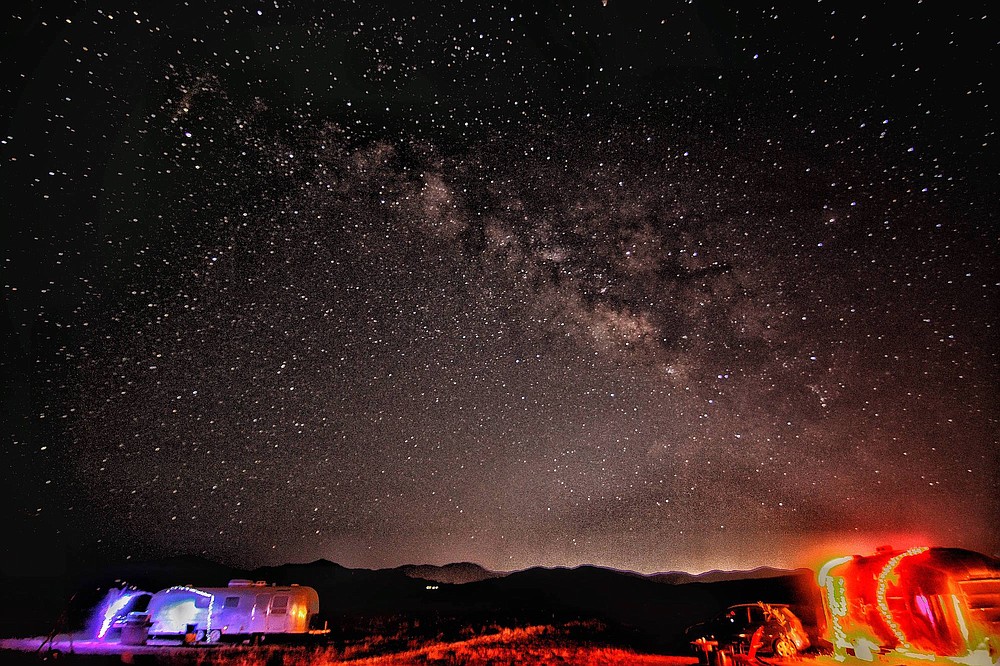 The stars don't look like this in San Diego.

I woke up before 3 a.m. to go to the bathroom outside under the stars as nature intended. The moon was gone, and the Milky Way shined south above an empty caravan. This was the picture I had meant to take. Sleepily, I grabbed the tripod, set up the camera, and hazily took dozens of pictures in a dreamlike mentality. My girlfriend woke up and urged me to get back to bed.

It resulted in one of the best pictures I’ve taken in my life (above).

The next morning we were ready to leave around 10 a.m. We still needed to pay César for the night, but he was still snoozing. After waiting almost an hour, he made it back to the site with a tired face and casually charged us for our stay.

80% of businesses in the Guadalupe Valley operate without licenses

In spite of the dizzying growth of the Guadalupe Valley, where hundreds of businesses have concentrated, including hotels, restaurants and wineries, and which figures as one of the principle tourist destinations in Mexico, more than 80% of theses establishments lack operating permits. In light of this situation, personnel from the Office of Commerce, Alcohol and Public Events for Ensenada started in inspection process to create an updated list and promote the regularization of businesses in all areas.

Rebeca Mungaray Lagarda revealed that her agency only has 68 permits issued, and most of those are for restaurants, "and are for the city, not the Guadalupe Valley."