From Park and G to Chicano Park to Harbor Drive 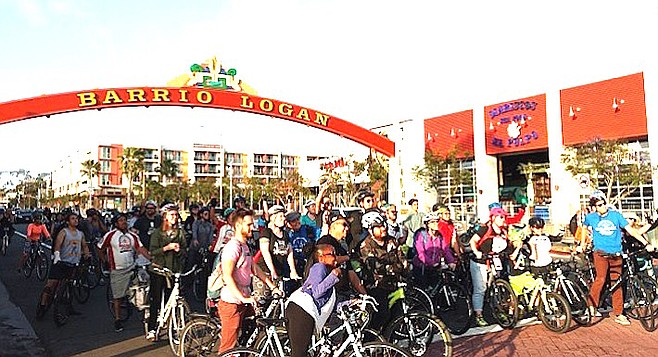 City councilmember David Alvarez met with more than 100 cycling enthusiasts assembled by the San Diego Bike Coalition on Thursday afternoon (May 4) to lead a ride through his native Barrio Logan. 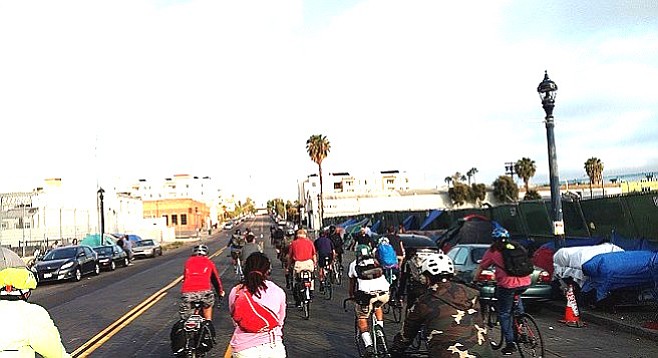 Past the trolley depot and onto National Avenue, where the group contrasted with rows of tents and makeshift sleeping quarters lining the sidewalks.

"When you're on a bike, it makes a world of difference to help understand what's happening in the community," said Alvarez, who told the group he commutes by bike two to three times a week.

Leaving from the Quartyard in downtown's East Village, the ride headed south on Park Boulevard from the corner of G Street, making its way past the central library, down Imperial past the trolley depot and onto National Avenue, where the group contrasted with rows of tents and makeshift sleeping quarters lining the sidewalks. Heading down Cesar Chavez Parkway, traffic began to snarl as bikes flowed into vehicle lanes.

After stopping for a photo, the ride turned through Chicano Park, heading onto Logan Avenue and past Border X Brewing, one of a handful of local bike-friendly businesses pointed out by ride leaders.

"In Barrio Logan there are no bike sharrows [painted indicators reminding motorists that cars and bikes are to share the right lane in areas without bike lanes], no bike lanes – there are hardly any bike racks," offered Francisco Contreras, an activist who's worked to bring bike opportunities to children at King-Chavez schools in the neighborhood.

Contreras has spearheaded an initiative through the schools' parent-teacher organization that has seen 10 PTO members get bike safety certifications and brought in nearly 80 students as members of newly-formed primary and high school bike clubs.

"We don't want them to have to go out and buy bikes," Contreras continued, explaining that he relies on donations of old cycles from the community that he refurbishes and pieces together to offer disadvantaged youth access to ride.

A Bike to Art event the clubs are organizing later this month in Chicano Park seeks to expose more Barrio residents to cycling.

Back on the ride, after completing the route similar to the one Alvarez says he takes to work, the group found its way back to Cesar Chavez Parkway going southwest, turning back north onto Harbor Drive toward downtown. While this is one of the few streets along the route featuring a dedicated bike lane, cars whiz past at speeds often exceeding 50 miles per hour, causing some riders including children to seek further refuge by riding a dirt strip off the roadway completely.

Alvarez told riders, "There is money coming in, not just to San Diego but other cities, to improve our streets and infrastructure overall. We want to make sure that those improvements to our streets include amenities for bicycling. The money is there."