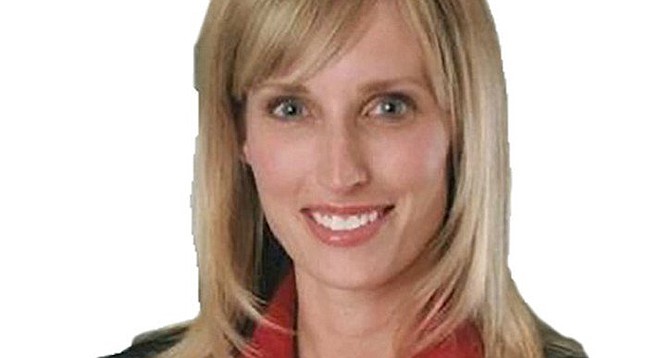 The widely expected coronation of Rancho Santa Fe Republican Summer Stephan as the county's next district attorney, courtesy of the GOP board of supervisors, is rapidly approaching.

Meanwhile, the most recently elected member of the board is already raising cash for her 2020 reelection drive, raising questions among local Democrats and others about the integrity of San Diego government and jurisprudence.

Kristin Gaspar, who narrowly ousted Democratic incumbent Dave Roberts last fall, has declared her intention to run for reelection and set up a 2020 campaign fund, per May 3 disclosure filings.

Despite the appearance of her board votes for sale, Gaspar is expected to rake in millions of dollars in the years leading to the June 2020 primary, buoyed by a sharply rising tide of special-interest cash plying all county elected politicos.

Gaspar's 2016 campaign raised more than $620,000, and her early fundraising start this year, along with the power of her incumbency, will likely guarantee she’ll easily eclipse that number by 2020.

In addition to her own 2016 money raising, Gaspar was the beneficiary of a $407,000 campaign fund calling itself Citizens for Fair and Honest Leadership . It was bankrolled by the Infrastructure PAC of the Associated General Contractors, which gave $35,000; the Building Industry Association of San Diego County PAC, with $30,000; and the Sacramento-based California Real Estate Political Action Committee, also known as CREPAC, with $25,000.

An additional $272,000 was funneled into the Gaspar war chest by the San Diego Regional Chamber of Commerce PAC, which in turn got $52,500 of its money from giant utility Sempra Energy.

In one of her first actions as supervisor earlier this year, the North County Republican followed the wishes of Sempra-owned San Diego Gas and Electric and helped shoot down a feasibility study of energy rates and procurement practices opposed by the utility.

In addition to bread-and-butter criminal cases, the district attorney is supposed to oversee a wide range of white-collar investigations and prosecutions, including government corruption cases that critics say incumbent Dumanis has long neglected, creating a culture of back-room wheeling and dealing between government officials and campaign contributors.

Adding to the absence of transparency has been the demise of mainstream journalism, epitomized by the virtual collapse of the Union-Tribune's government and political coverage, which has emboldened elected officials to engage in unethical activities and awards of special interest favors, political observers of both parties note.

Another of the D.A.'s ostensible jobs is enforcement of the state’s so-called Brown Act, the open meeting law mandating that elected officials conduct their business in public, rather than bars, eateries, and the conference rooms of major contributors.

Lax oversight by Dumanis has allegedly led to a succession of non-public meetings and secret developer deal making, including repeated sessions held between GOP mayor Kevin Faulconer and real estate promoters seeking to gain control of Qualcomm Stadium for a massive development project.

Dumanis's announcement resignation last month was set in motion by a plan — said to have been engineered by Dumanis and Republican kingmakers — calling for the board of supervisors to appoint Dumanis deputy Stephan to the seat this July, allowing her to run as an incumbent in 2018.

Roe’s behind-the-scenes machinations for the mayor were questioned as a possible conflict of interest by Chargers special counsel Mark Fabiani in February 2015.

A few high-profile critics, including high-ranking Democrats and the local chapter of the American Civil Liberties Union, are lobbying the board to fill the Dumanis seat with a candidate who pledges not to run for the job next year.

But the GOP supervisors are pushing back, in one case with the argument that the county's politicians can't be trusted.

"People could apply for this and say they're not running, but as we know from past performances people sometimes do that and decide 'You know what, I think I really will run,' and there is nothing illegal about that," said Ron Roberts, who during his lengthy tenure as a Republican politico has been beset by a bevy of fundraising questions of his own.

buying into an office via a PAC - how do we spell corruption?

Money talks and the voter walks. All politicians are obliged to cater to those who funded their campaigns. The average voter only has the choice of which bought-and-paid-for politico to elect. Money has completely corrupted the political process. Follow the money and you will find the owner operators of the politician.