A wider road from Bonsall to I-15 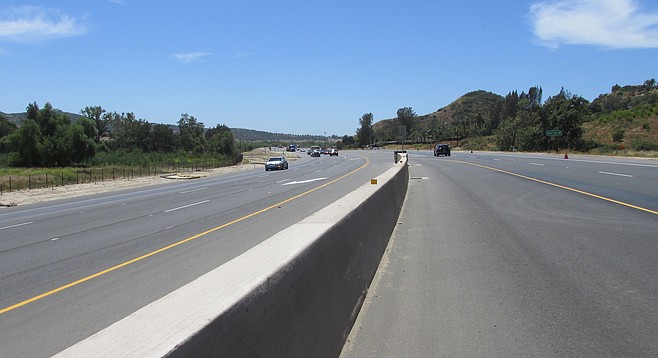 Caltrans has quietly opened up the four finished lanes of the long awaited, and final leg, of the Highway 76 widening project. The last 4.3-mile stretch from Mission Road in Bonsall, to I-15, completes the project that started in 2014. 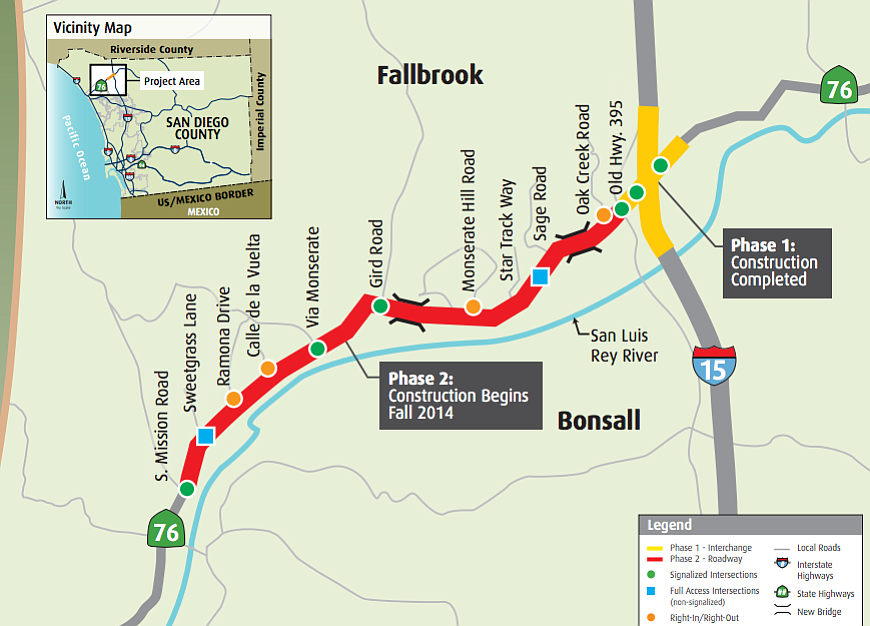 There are only two cross-highway traffic signals at Via Monserate and Gird Road.

The former 1950s-era narrow and curvy road was only 28 feet wide and often a slow-moving parking lot. The widened highway is now 88 feet wide; wider at intersections.

20,000 travelers a day commute west off the 15 from south Riverside County, or eastbound North County motorists trying to get to the 15 to head out to the desert, mountains, or nearby casinos.

It’s estimated commuters now will save seven to nine minutes in travel time with the highway’s improvements, said Caltrans’ project manager Karen Jewel. Much more time savings will be found in the congested commute times.

The ongoing construction of small projects; signage, drainage, re-stripping, should be competed in July. “It will be four months ahead of schedule,” said Jewel. She claims the project will come in close to the $201 million budget, including unexpected damage that occurred with this year’s storms.

As of May 1, two-tenths of a mile, at the intersection with Mission Road, eastbound, is still just one lane, but the pavement is in place. Barriers just need to be moved and the lanes re-striped.

With only two cross-highway traffic signals at Via Monserate and Gird Road, the now-divided highway makes the roadway safer, and offers an increased speed limit of 55 MPH.

With continued growth in southwestern Riverside County, the addition of a large satellite campus of Palomar College, five new planned residential neighborhoods for the northwest corner of I-15 and Hwy. 76, and increased traffic to four nearby casinos (Valley View, Pala, Pauma, Pechanga), Caltrans projects daily traffic volume along the whole 17.5 mile Highway 76, Oceanside to I-15, will reach 46,000 vehicles by 2030.

Good to hear that it is complete. Sad that it should have been in place twenty years ago. So, now it's time to go across I-15 and upgrade Highway 76 to the east. That area is loaded with casino traffic, and the highway still has 1920's era curves in it. Again, it should have been upgraded before the casinos were built, and the best way to accomplish that would have been to require the casinos, such as Pala, to finance the highway upgrade east from I-15. What am I thinking? Such developments never have to pay for the roads and highways needed. That always comes afterwards, and the taxpayers pay.

The Pala tribe has and will pay for some of the highway expense.

chriscarmichael is correct Visduh, but you are right in your thought - it should have been required before the resorts were built. I always wonder how many DUI's and head ons have taken place on the east section of 76. Just putting up signs that read, "Safe Driving Corridor" doesn't help, although it gives something for the DMV's Office of Traffic Safety and CHP to spend money on, collected of course by more officers patroling the highway, which I guess is a good thing. More officers, not more tix.

Agreed. The Pala Band will pay for "some" of it. Will Pauma also pony up some coin? How about the others that also add traffic on 76? Whatever gets done there is too little, too late.